Dismissively called “Fenland” by outsiders for the broad swath of fetid, tidal saltmarsh almost cutting the duchy in twain, Ashlar sprawls along the appropriately named Hard Bay. Effectively isolated from the rest of the continent by a high plateau crowned by dark, silent woods clustering hard against a legion of fantastically shaped stone spires, Ashlar is a realm of hard, resilient folk.

Behold: the storied Duchy of Ashlar: 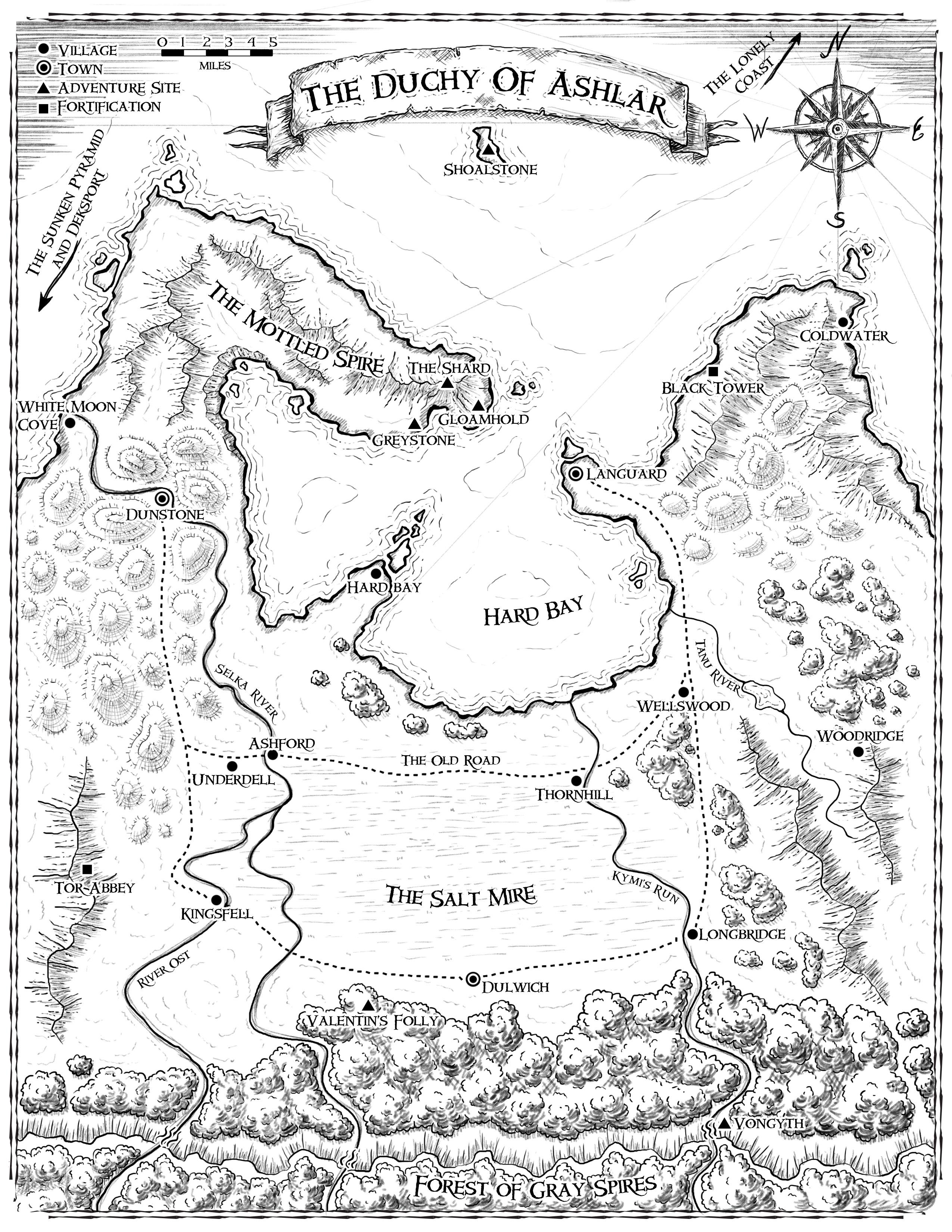 The Duchy of Ashlar by Tommi Salama

Last week, I had a couple of requests to reveal a little bit about the area surrounding Gloamhold. Well, here you! This is a first draft of the area. Perceptive readers will notice some familiar names: the Sunken Pyramid, The Lonely Coast, Deksport and even Valentin’s Folly! It should be clearly obvious by now, but I am not a skilled cartographer, but hopefully there is enough here to give you a sense of the surrounds. Edit: You can now see a much better version of this map here.

For centuries, the folk of Ashlar have dwelt in the shadow of ancient evils. Although it has stood for generations, the Grand Duchy is not the first kingdom to claim the lands sprawling north of the Forest of Gray Spires. From his seat in Languard, the Duke ever watches over his realm. Brooding upon the ancient shadows seemingly clustering ever closer about his realm, he looks to the grim, towering bulk of the Mottled Spire as the source of much of the evil besetting his people. Within this towering, wave-lashed shard of limestone lie the labyrinthine passageways and chambers of Gloamhold and, beyond them, the benighted precincts and canals of the legend-shrouded Twilight City.

The Duchy of Ashlar has the following major features:

Ashlar has several locations of interest:

27 Comments Share Tweet Print Email
Categories: Gloamhold, Pathfinder, Raging Swan Press
Disclosure of Material Connection: Some of the links in the post above are “affiliate links.” This means if you click on the link and purchase the item, I will receive an affiliate commission. Regardless, I only recommend products or services I use personally and believe will add value to my readers. I am disclosing this in accordance with the Federal Trade Commission’s 16 CFR, Part 255: “Guides Concerning the Use of Endorsements and Testimonials in Advertising.”

27 thoughts on “Gloamhold: The Duchy of Ashlar”