Sprawling across a swath of hard-packed earth (or cloying mud depending on the season) Low Market is a hodgepodge of stalls, handcart vendors and wandering pedlars. Here Languard’s unwashed masses come to browse, shop and gossip. 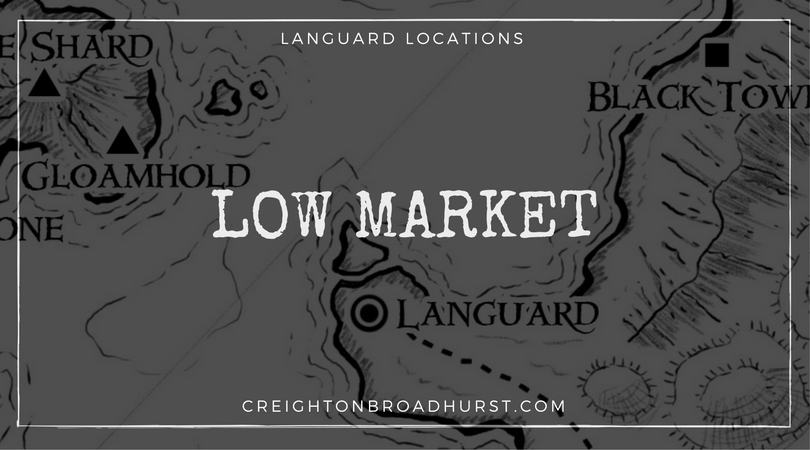 Unsurprisingly, thievery is rife in Low Market, and the Watch maintains a strong presence. Unfortunately, due to the sheer crush of people in the market during the day, their efforts are often sadly unsuccessful. By local ordinance, all business in the market must be concluded by dusk; thus once night has fallen the place is seemingly empty. However, not all is as it seems for many clandestine meetings are convened here at night; some come to drink, others are merely passing through while some tented stalls host prostitutes; others become the temporary home of beggars and outcasts.

The stalls filling the Low Market almost uniformly deal with the mundane things in life—food, drink, household wares, cheap cloth and so on. Little of actual value can be found here, except—perhaps—among the bric-a-brac stalls whereon desperate folk sell whatever they can to make ends meet. Sometimes, unbeknownst to these folk, valuable items come into their possession which they pass on for a pittance. Thus, adventurers can often be found idly browsing such stalls—stories (perhaps spread by the vendors)—are rife of lucky adventurers buying magic items here for a pittance from clueless sellers.

Many people work or visit Low Market on a daily basis. Most are nothing more than ordinary, albeit well-off, folk going about their business. Others are more notable; such folk include:

Low Market is a place rife with adventuring opportunities. Perhaps, a PC is pickpocketed or witnesses and intervenes in a crime. Alternatively, the PCs could purchase a fragment of a treasure map or the diary of adventurer which describes several of her delves into Gloamhold.

One thought on “Low Market”