A ship’s figurehead—a rampant eagle with wings outstretched—looms over this tavern’s door and casts its shadow into the muddy street. Flecked with peeling, weather-worn paint the once-proud eagle has seen better days. In many ways, it reflects the faded fortunes of the Bloody Eagle’s owner, Fruen the Unlucky (CN female half-orc fighter 2/thief 3). 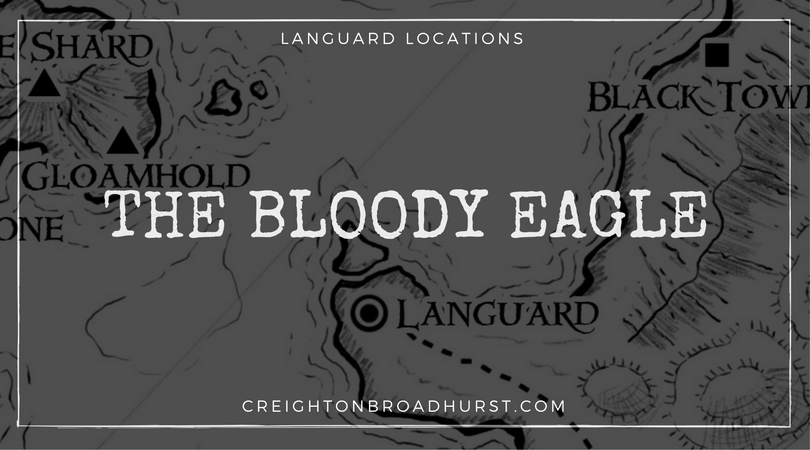 Once a wealthy merchant widely suspected of being a smuggler, Fruen has fallen on hard times. Both her ships lie wrecked beneath Hard Bay’s storm-tossed waves and she is all but bankrupt. All that remains of her fortune is the figurehead that gives the tavern its name and the tavern itself (which she purchased with the last of her dwindling wealth).

In truth, Fruen is not as poor as she makes out. Her business had become deeply in debt to the Shadow Mask. Hiding her wealth on an isolated island far out in Hard Bay she wrecked her vessels and hoped the Shadow Masks would forget about her. Sadly, they did not and have forced her to run the Bloody Eagle—one of their many fronts in the Shambles—to pay off her debt.

All the staff of the Bloody Eagle are in the Shadow Mask’s pay.

Many of the regulars at the Bloody Eagle are members of, or affiliated with, the Shadow Masks. They include Cyanae Kaniateir (NE male elf rogue 2/wizard 1), Neega (NE half-orc female fighter 1), Usko “the Sly” (NE male human rogue 1) and Varma Vuolle (CE female human rogue 3).