The Fishshambles sprawls along the waterfront to the north of Cheap Street. Here a tangled, reeking labyrinth of narrow, tenebrous alleys—punctuated by a few wider roads—runs down to the Svart and the network of rickety wharfs and jetties jutting from its southern bank. A few folk maintain totteringly decrepit warehouses, hard against the docks; most such locations are used for nefarious activities such as smuggling. At least two are under the thieves’ guild’s control. 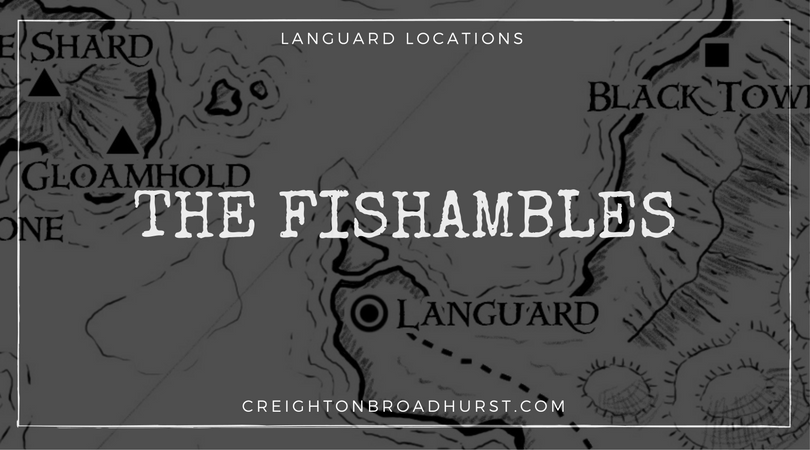 The folk here are tough, well used to dealing with the versititudes of life and Hard Bay’s perils. Adventurers seeking a boat and its master brave enough to sail to Gloamhold will likely eventually gravitate here.

Many of the folk and businesses in the Fishambles—unsurprisingly— make their living from the sea. Most of the choicest fish is landed in the Old City; the folk dwelling here must make do with the cast offs and leavings of the wealthier folk across the river.

A hub for fishmongers and the like, this surprisingly wide alley reeks of fish, salt and the stench of unwashed bodies. Here, fishermen sell their daily catch from small booths while others smoke fish or bake fish pies. The freshest fish on Smelly Alley are generally to be had as soon as the daily catch has been landed. Unscrupulous fishmongers—of which there are many of Smelly Alley—have no qualms in selling fish several days old to unsuspecting (or poor) customers.

Smelly Alley can be very busy—normally after the daily catch has been landed. Other times, while the boats are at sea, it is almost deserted.

Bounded by ruined and crumbling buildings, Water Lane is the haunt of beggars, lepers and those with nowhere else to go. No-one really cares what happens on Water Lane; it is a good place to plot nefarious doings (or to dispose of a body).

Puddle Lane lies at the top of Water Lane. Here, when Water Lane is flooded the ground is merely boggy. Folk living along Puddle Lane are some of the poorest, most desperate folk in Languard.

Another low-lying part of the city, this alley is often little more than a quagmire. Here, houses—their meager foundations eroded away—lean drunkenly against one another. The sun rarely banishes the gloom from this narrow thoroughfare.

One thought on “The Fishambles”