Buried in an immense cavern at the very heart of the Mottled Spire, the Twilight City sprawls across a series of low islands struggling above the cold, dark waters of the Sunless Lake. 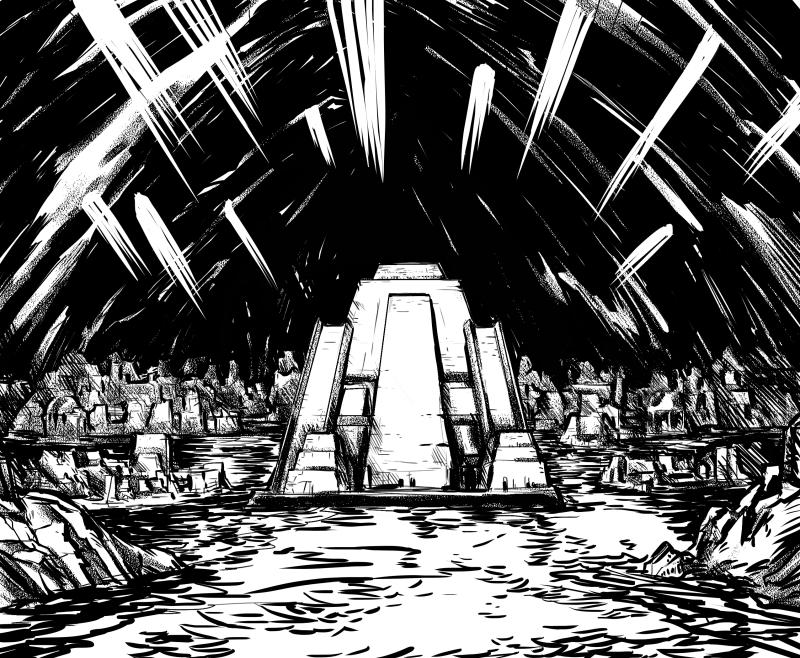 The Twilight City by Matt Morrow

The city is one of the best-known locations within Gloamhold and is intermittently explored, claimed and fought over by dungeon denizens and adventurers alike.

An ancient place of stone ziggurats, fetid and twisted canals and cyclopean architecture, troglodytes built the city when the world was young and their great empire straddled much of the known world. A score or so of troglodyte tribes yet dwell amid the fallen glory of their forgotten heritage. A warlike, feral people they often squabble over the ruins and wage war against one another. Occasionally, a particularly charismatic or powerful leader arises among the tribes and leads a savage coalition of tribes to bloody war.

The cavern roof soars 1,200 feet above the city’s crumbling ziggurats and in places has collapsed allowing shafts of frail sunlight to pierce the gloom filling the cavern’s upper reaches. Sometimes, brave adventurers – not wishing to dare the dangers of Gloamhold’s outer halls – use these rents in the rock to reach the Twilight City. Without magic, most such attempts are doomed to failure.

The Sunless Lake is tidal, and much of the city sporadically floods during particularly high tides or the vicious winter storms battering the coast. Set upon the largest island, about the yawning black gulf of the Daimonic Maw, squat five huge ziggurats. The greatest of these, the 500-foot high Whispering Fane, dwarfs the others. Beyond the Twilight City lies the Screaming Gate and the Ebon Road.

Troglodyte Tribes of the Twilight City

Degenerate troglodyte tribes infest much of the Twilight City; their cloying stench rises above the tumbled ruins like an ancient miasma. The tribes constantly squabble and fight among themselves. Shadows of their race’s former glory, the tribes gaze upon the ancient ruins of their forbears with uncomprehending eyes.

Four of the more notable tribes include:

Below the Twilight City

Rumours persist of caverns buried deep below the Twilight City in which light has never – and indeed can never – shine. The few survivors of expeditions into this terrible, claustrophobic underworld heavy with the weight of untold aeons speak of a malevolent, inhuman and deathless sentience lurking in the darkness protecting the crumbling ruins of a civilisation so old even the elves have forgotten its existence.

The immense, cyclopean bulk of the Whispering Fane towers over the surrounding ziggurats and city. A huge ziggurat of black, basaltic masonry it is dedicated to nameless, blasphemous gods of an elder epoch almost wholly unknown to man. Set hard against the maw of the Daimonic Maw – a gigantic sinkhole of unknown depths from which a disturbingly warm breeze redolent with unknown scents of terrible, otherworldly places issues – at its zenith, a magical-crafted span of dull green stone arches out over the Daimonic Maw. At its tip stands a stone altar stained black by the blood of countless sacrifices.

Within, the darkness itself seems to breathe and shadows press closely about explorers. Magical traps, sentient construct guardians and the deranged cultists of sinister inhuman powers all lurk within the fane.

4 Comments Share Tweet Print Email
Category: Gloamhold
Disclosure of Material Connection: Some of the links in the post above are “affiliate links.” This means if you click on the link and purchase the item, I will receive an affiliate commission. Regardless, I only recommend products or services I use personally and believe will add value to my readers. I am disclosing this in accordance with the Federal Trade Commission’s 16 CFR, Part 255: “Guides Concerning the Use of Endorsements and Testimonials in Advertising.”

4 thoughts on “Gloamhold: The Twilight City”