Widely thought to be a haven for smugglers and other miscreants, rumours swirl as thickly about Coldwater as the persistent sea fogs that sometimes blanket the place for days at a time. Set at the head of a muddy cliff top path, Coldwater is an isolated, dismal place. Its folk are sullen, ugly people and even the village’s ruler hates the place. For all that, Coldwater can be a place of opportunity and adventure. Sometimes, pirates drop anchor off the coast to deal with the local smugglers while rumours of a sunken stair and a nearby cove of ill aspect bring a steady stream of adventurers to the village. 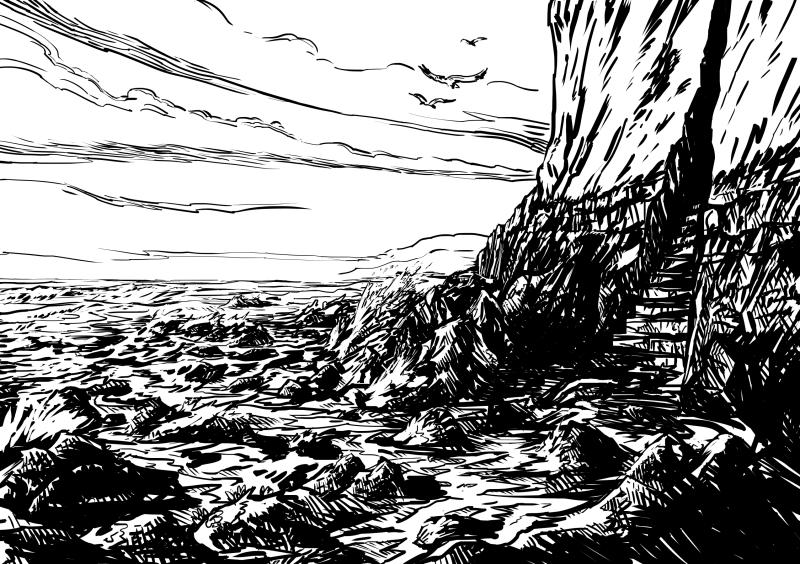 An isolated place, perched upon an inhospitable coast at the head of a muddy coastal path, Coldwater is not an easy, or pleasant, place to visit. The village huddles at the mouth of a steep-sided valley leading down to the sea. Here, the seabed quickly drops away and the waters are deep, dark and cold.

Widely thought to be a haven for smugglers and other miscreants, rumours swirl as thickly about the village as the persistent sea fogs that sometimes blanket the place for days at a time. Other rumours—whispered in taprooms up and down the coast—speak of darker things: of unwholesome practises carried out in worship of some ancient, depraved power, of travellers going missing near the village and of an ancient set of steps buried at the base of nearby cliffs and revealed only at particularly low tides.

Whatever the truth of Coldwater, its folk are sullen, distrustful of outsiders and some are said to suffer from horrible deformities. Even the village’s ruler—the aged Elina Vuolle—hates the place. Two families dominate day-to-day life in Coldwater: the Eerolas and the Purhos. Trapped in a low-grade, but nevertheless vicious, family feud the two families subtly work against one another and use the other villagers as pawns.

Most of Coldwater comprises peasant homes. A few locations, however, are of interest to adventurers:

The Village of Coldwater is part of the Duchy of Ashlar mini-campaign setting and the upcoming backdrop for the adventure Fane of the Undying Sleeper.

2 thoughts on “Gloamhold: The Village of Coldwater”