The only bridge spanning the Svart, Vonya’s Span—or “the Span” as it is colloquially known—is a prominent city landmark. Comprising three great stone arches, it stands at the point the Svart widens on its journey toward the sea. It marks the spot beyond which ocean-going vessels cannot pass. 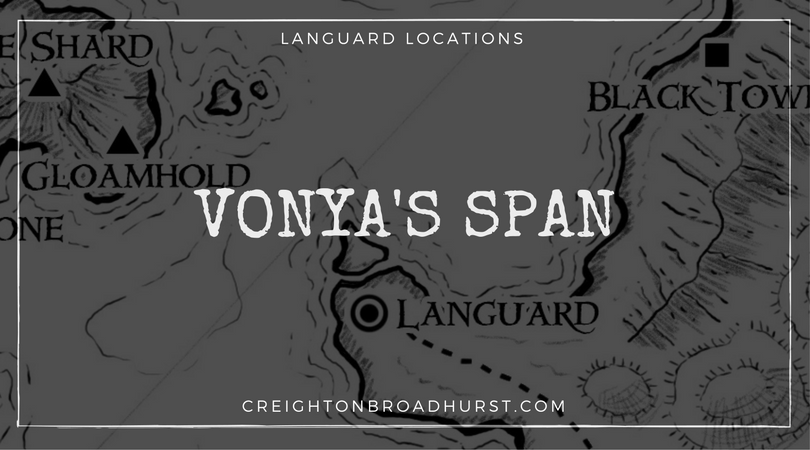 A towering gatehouse stands at its northern end, warding the Old City. In times of crisis or danger, this gate is shut. Normally, however it remains open. It is always, however, garrisoned by the City Watch who maintain a small garrison here.

The bridge itself is 25-foot wide, but buildings cluster on both sides of the street reducing the usable carriageway to barely 15-foot wide. Housing shops at street level, and cantilevered out over the Svart for an extra ten feet to so, these buildings reach three stories or more into the air. A chokepoint, Vonya’s Span is one of Languard’s busiest streets. It is barely wide enough for two carts to pass side-by-side. Sometimes traffic becomes snarled here and chaos results.

Vonya’s span is named for Vonya Madann—the alcoholic dwarven stonemason responsible for its construction. A companion of Arndul Nenonen—the wandering adventurer who founded Ashlar—she was as skilled as she was troubled. The bridge is of stout dwarven design and construction. Although it is over four centuries old, and one of the oldest structures in the city, it is in excellent condition. Despite this, some say the bridge is haunted by its architect’s capricious shade. Vonya disappeared—tragically—one night while crossing the bridge. Local legend has it her ghost can still be seen on the bridge on the anniversary of her disappearance—as no-one can agree on said anniversary any strange events on the bridge tend to get blamed on Vonya’s restless spirit.

Businesses on the Span

The businesses clustering on the Span are almost all uniformly successful and busy—the sheer volume of traffic on the bridge virtually guarantees this. Most deal with normal, mundane needs: refreshments, clothes, shoes and the like.

2 Comments Share Tweet Print Email
Categories: Creighton, Gloamhold
Disclosure of Material Connection: Some of the links in the post above are “affiliate links.” This means if you click on the link and purchase the item, I will receive an affiliate commission. Regardless, I only recommend products or services I use personally and believe will add value to my readers. I am disclosing this in accordance with the Federal Trade Commission’s 16 CFR, Part 255: “Guides Concerning the Use of Endorsements and Testimonials in Advertising.”