Lying exclusively to the south of the Svart, between Cheap Street and Low Gate, the Shambles is a place of narrow, twisting alleyways, tottering tenement buildings and cloying desperation. Here, dwell Languard’s poor in cramped, unsanitary conditions. 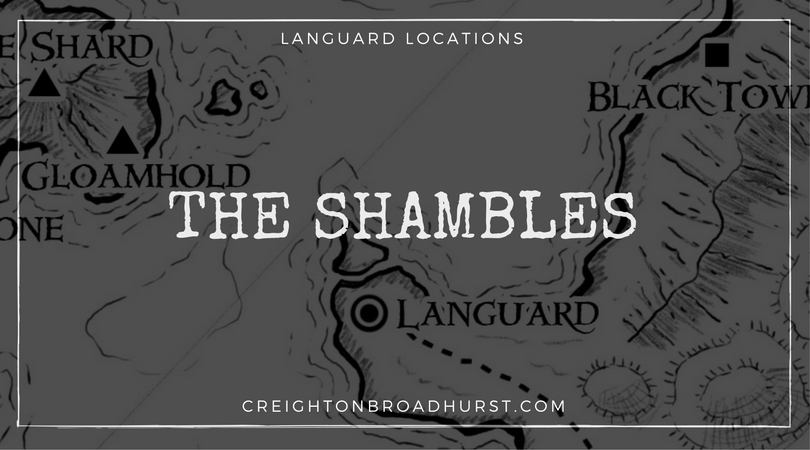 Most of the dilapidated buildings standing in the Shambles are of shoddy wooden construction. Mostly standing three—or sometimes four—stories high, they cluster together; upper levels jut out over the alleys below giving the whole district the aspect of some kind of gigantic sunken maze. The streets are nothing more than packed, worn earth that turn to slippery mud during heavy rainfall.

To the north, Cheap Street divides the Shambles from the Fishambles.

Wide enough for a cart, Cheap Street is one of Languard’s main thoroughfares. During the day, the street is always busy. The name of the street (unsubtly) alludes to the quality and cost of goods and services available here.

The wealthiest of the Shamble’s denizens—mostly those with respectable or semi-respectable jobs—dwell in the houses along the street. Some have pretensions of moving north to the Old City. Others, cling on by their fingernails—doing whatever it takes to avoid moving into the Shambles. Many of the buildings feature shops or workshops on the ground floor, but none deal in the type or quality of goods attractive to the Old City’s denizens.

Those who escape the Shambles, but lack the funds to dwell in the Old City end up in the swath of buildings between Warrior’s Way and the southern wall. Here the buildings are larger and some are even of stone. Those entering the city through Low Gate with business in the Old City—and desirous of avoiding the unique challenges and dangers of the Shambles—take Warrior’s Way to reach the Low Market and Vonya’s Span. While pickpockets lurk among the crowds—ready to escape back into the Shambles with their prizes—the chances of being mugged or murdered on Warrior’s Way are low.

The Watch—from their barracks on Low Gate and Traitor’s Gate—maintain a strong presence on Warrior’s Way. They do not normally dare enter the Shambles, though except in large numbers.

Cross Street is one of the busiest in Languard, running from Cheap Street to Low Gate it handles much of the traffic going to and from the docks. Also known as Carter’s Way, carts and wagons are a common sight. Businesses on Cross Street cater to travellers; taverns, inns and cartwrights being particularly common here as are provisioners and suchlike.

2 thoughts on “The Shambles”