I’ve thought a lot about complexity (and simplicity) in campaign and adventure design recently. I’ve previously posted about the Paradox of Choice and KISS, but I can’t seem to shake the allure of simplicity. 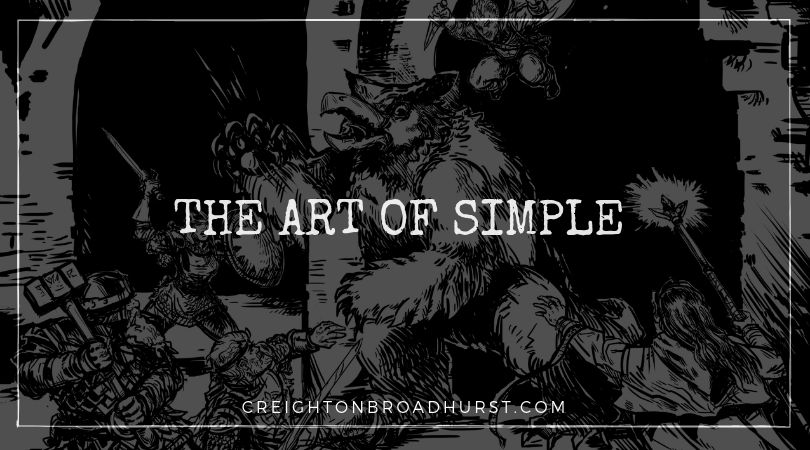 Simplicity and complexity are two sides of a coin in the same way as good and evil are opposites. Some gamers love fast and loose systems (such as Basic D&D) while others love the rich tactical and mechanical complexity of games like Pathfinder. There is no right or wrong way to play—if everyone is having fun at the table, it is all good. If this is the case, you should ignore anyone who tells you, you are gaming “wrong”.

That said, I think we are missing a bit of trick when comes to simplicity in design. In today’s increasingly busy world we’ve fallen a little bit in love with complicated (sorry, sophisticated) solutions to problems. But to my mind, the more complicated (or sophisticated depending on your viewpoint) the solution, the more things can go wrong (and, probably, the longer it takes).

While a complicated solution to a problem might actually be better, is it superior enough to justify the extra time spent implementing it? One of simplicity’s strengths is speed. To put it into a gaming perspective, would you prefer to spend four hours:

Previously, I’ve really only considered complexity vs simplicity in regards to the rules of the games and the options allowable at the table.  (I’m not a fan of rules bloat as I think it slows down, but I’ll be merciful and not go on about that today).

I am, however, a big fan of, “Less, but better” and I’ve recently begun to consider the concept of simplicity in regards to adventure and campaign design. B2 Keep on the Borderlands is a classic, and is apparently the most played adventure of all time. It’s also simple. Essentially, you have a home base (the keep) separated from the adventure location (the Caves of Chaos) by a small stretch of wilderness. The PCs are “bold adventurers from the Realm set off for the Borderland to seek their fortune” and “fell creatures” lurk in the aforementioned Caves of Chaos. As setups go, you can’t get much simpler than that!

Is simplicity the only reason for the adventure’s success and enduring appeal? Of course not, but I’d argue it’s one of the adventure’s foundational strengths. I doubt many players have asked the motivation-shrivelling question, “Why are we here again?” We get it, instinctively. The PCs are brave, heroic adventurers come to slay the “fell creatures” living in the Caves of Chaos and steal their stuff.

Ironically, as I think more about simplicity I’ve started running a sandbox-style game set in Ashlar and the doom-shrouded megadungeon of Gloamhold. At first glance, a simple game has all the hallmarks of a “railroad” while a sandbox game seems on the surface much more complicated as the PCs can—in theory—go anywhere and do anything. I’m not sure that’s necessarily true, though, when you dig a little deeper.

At the end of the day, the underlying theme of a campaign set in and around a megadungeon is exploration. Sure you can layer stuff/complications—plots, villains, adventure hooks and more—on top of the basic concept of exploration, but essentially the “plot” of a megadungeon campaign could be boiled down to the question, “I wonder what’s in there (and can we kill or sell it)?” Thus, a megadungeon campaign is both more simple and complicated from the start. It’s simple because everyone gets the basic concept—to explore the megadungeon—and it’s complicated because the PCs have much more freedom of movement than in a typical campaign. It’s an interesting dichotomy I clearly need to give some more thought as I continue designing my campaign. In essence, that’s the art of simplicity: balancing it against the dark allure of complication and the ever-present threat of boredom.

Are you a fan of simple or complicated games? Have you pondered this very question? Let me know, in the comments below.

2 Comments Share Tweet Print Email
Categories: Adventures in Shadow, Creighton, Gaming Advice, Gloamhold, GM Advice
Disclosure of Material Connection: Some of the links in the post above are “affiliate links.” This means if you click on the link and purchase the item, I will receive an affiliate commission. Regardless, I only recommend products or services I use personally and believe will add value to my readers. I am disclosing this in accordance with the Federal Trade Commission’s 16 CFR, Part 255: “Guides Concerning the Use of Endorsements and Testimonials in Advertising.”

2 thoughts on “The Art of Simple”