With the door pushed open, Thangrim hurled himself into the small chamber beyond.  In the centre stood a plain stone bier and atop the bier lay a decomposing body. As Thangrim pushed further into the room, the corpse began to twitch and move. Within seconds, it was fully animated and leaping at the startled dwarf. It smashed into the warrior, badly injuring him. With the shock of sudden violence fading Orm—angered at his friend’s injury—stepped forward and cut the foul creature in twain with one mighty swing of his massive sword. 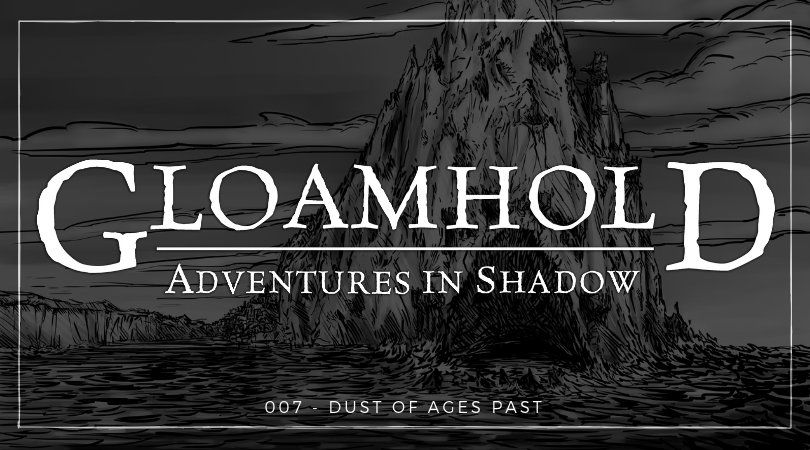 The fight was over as quickly as it had begun. Veronwe tended to Thangrim’s wound while the rest of the party searched the chamber. They found nothing and shortly thereafter descended the second flight of stairs to discover two more doors. One of the doors was iron-bound and graven with symbols of Conn. Jeremiah suspected a trap, and he was right—the perceptive half-elf spotting a thin web of faintly glowing runes covering the door. Toliyrath used his magical powers to determine the runes exuded evocation and necromantic magic and the adventurers decided to try the opposite door first.

This door opened easily to reveal a small chapel dedicated to Conn’s three areas of concern: community, rulership and family. A beautifully carved statue dominated the room and the heroes recovered three processional symbols from niches cut into the chamber’s walls.

After a brief conclave, the heroes decided to ignore the magically trapped door for now as Tolirayth using a read magic spell had discovered a powerful curse lurked in the protective runes covering the door. Thus, instead, they descended yet another set of stairs. This flight ended in a small puddle-filled landing. Beyond stood a long flight of steps ascending about 40 ft. Atop the stair stood an eight-sided chamber; a door pierced each of the chamber’s walls. A fantastically carved stone statue of a handsome man with glittering translucent brown gemstone eyes clutching a mace stood at the head of the stairs. As the party entered the room it animated and turned to stare at the now concerned adventurers.

Thinking quickly, Veronwe presented one of the processional symbols and the statue quickly returned to rest, placate by the presence of a powerful symbol of Conn.

Exploring the chamber, the party discovered five of the doors had names graven into their surfaces, and later discovered each was a tomb to the so-named individual decorated with frescos depicting scenes from their lives. Two of the other rooms were empty while the last’s door was nailed shut. The symbol for evil was daubed on that door. By now, the party had retrieved the remains in the five occupied rooms, and loaded them all into two coffins ready to be carried back to the Father’s Hall. Curiosity forced them, though, to investigate this last tomb.

Carefully—but not quietly—they prised the nails from the door, prepared themselves and burst inside. Beyond the door, stood a small tomb similar to the others they had already explored. However, the whitewashed walls in here had been scratched and defaced. At first glance, the chamber was empty. Thangrim had again taken the lead and the warrior was again surprised—this time by an emaciated humanoid bursting forth from behind the room’s bier. Before the startled dwarf could react the creature tore a chunk of flesh from his neck. Badly injured, the brave warrior would have staggered back but he was immediately paralysed by the foul beast’s bite. Even worse, the creature exuded a terrible stench of death and decay that washed over many of the adventurers. Luckily, they were made of stern stuff and all resisted the fell effects of that unwholesome grave-stench.

Again, Orm stepped forward after Johann had failed to hit the creature with an arrow (the paralysed dwarf providing it with cover). Again, with one mighty blow, he sliced the creature in twain and the battle was over.  Veronwe healed the dwarf (again) and the party searched the room. The creature—now identified as a ghast—wore a beautiful silver necklace set with a translucent purple stone (an amethyst) which the party universally decided was not a grave good or religious relic (and thus kept). Beyond the ghast, though, the room was empty.

Talk now turned to what to do next. Some of the party wanted to desecrate the animate statue of Conn and prise out its gemstone eyes but wiser heads prevailed and the heroes decided to leave the statue to its eternal vigil. Instead, they returned to the magic-trapped door. Jeremiah again inspected the door and although he could unlock the door, he couldn’t defeat the trap—it’s magic was too strong. Consternation gripped the party for they had managed to glimpse through the door’s oversized keyhole and seen shelves of religious relics, books and so on beyond. Clearly, they had to retrieve the items but how? Eventually, Thangrim hit on the idea of reciting a prayer to Conn while opening the door. This the brave dwarf did and it seemed his insight was well-founded for no terrible event befell him. With this final barrier breached the party entered the room and retrieved its contents.

By now they had been underground for several hours and it seemed they have searched every part of the sepulchre.  Their quest complete, they carried the two coffins and all the relics they had recovered from the darkness of the subterranean sepulchre into the harsh light of day. It was then Johann made a surprising discovery. In the dust and mud amid the ruined church he spotted several sets of barefooted footprints clustered about the archway leading down into the sepulchre. It seemed that while they had been underground they had been watched…

With this revelation, the party part quickly made their way back to the harbour’s breakwater and signalled Taneli to come into shore so they could climb aboard. The return to trip to Languard was without incident—although chill as dusk had begun to fall by the time they docked at a wharf in High City. After an argument with an officious watchman who took an instant dislike to Thangrim, the party carried the two coffins through the streets to Conn’s cathedral; their strange procession did not pass without notice.

At the cathedral, they presented themselves and waited for Nuluani Sehiateir. Eventually, she arrived. The party presented all they had found and she was delighted. Talk turned quickly to reward and she promised the heroes she would send word to the Orc’s Head once she had properly catalogued their finds…

You can check out our session summary archive, here.