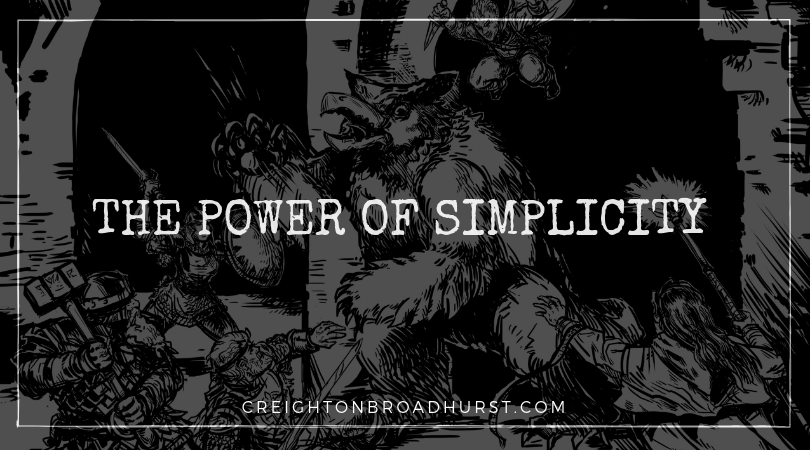 But the good news is that there’s a Goldilocks zone—not too simple, not too complicated—in which a campaign can thrive and grow. The trick is “getting into the zone”.

For me, simplicity has four main advantages in doing just that:

Of course, as I said above, if the game is too simple it likely won’t work in the long term.

This all brings me rather neatly to the 80/20 rule (or the Pareto Principle). Essentially, the 80/20 rule is simple. In any given pursuit—designing an adventure or campaign say—20% of your effort provides 80% of your result. To put it another way. 20% of customers generate 80% of a company’s sales.

If this general principle is true, it means that 20% of your game produces 80% of the possible fun and enjoyment. With this in mind, is there any real point spending loads of time and effort (and perhaps money) trying to nudge the needle upwards to 85% or even 90% fun? That’s a pretty epic diminishing return on investment.

So, for example, following the 80/20 rule—and trying to keep my game in the goldilocks simplicity zone—is there any real point adding in yet another subplot, adventure hook or a new set of rules options? Will my snazzy new battle mat and painted miniatures, new book of monsters or whatever really make my game that much more fun? Or will it just be more stuff to keep track of and drag to the game? Or in the case of new rules and plot hooks is it just more stuff to understand and remember that doesn’t actually bring that much extra fun to the table?

Given the Goldilocks zones of simplicity and the 80/20 rule would I be better off spending my time (my most precious resource) and money elsewhere instead of adding even more bloat to my game in the pursuit of the perfect campaign? If I can spend two hours a week working on my campaign and make my players 80% happy, I’d probably be insane to spend an extra eight hours preparing to make them (say) 90% happy because I could better spend those hours more productively elsewhere.

Perhaps instead, I should spend my time with my family, keeping fit and growing my business?

For me, the answer is pretty clear.

What do you think about the Goldilocks zones of simplicity or the 80/20 rule? Let me know, in the comments below.

5 Comments Share Tweet Print Email
Categories: Creighton, Gaming Advice, GM Advice
Disclosure of Material Connection: Some of the links in the post above are “affiliate links.” This means if you click on the link and purchase the item, I will receive an affiliate commission. Regardless, I only recommend products or services I use personally and believe will add value to my readers. I am disclosing this in accordance with the Federal Trade Commission’s 16 CFR, Part 255: “Guides Concerning the Use of Endorsements and Testimonials in Advertising.”

5 thoughts on “The Power of Simplicity”