Widely reviled, the 15-minute adventuring day reared its ugly head with the advent of 3rd edition. Since then, designers have tried various solutions to fix the “problem”, with varying degrees of success… 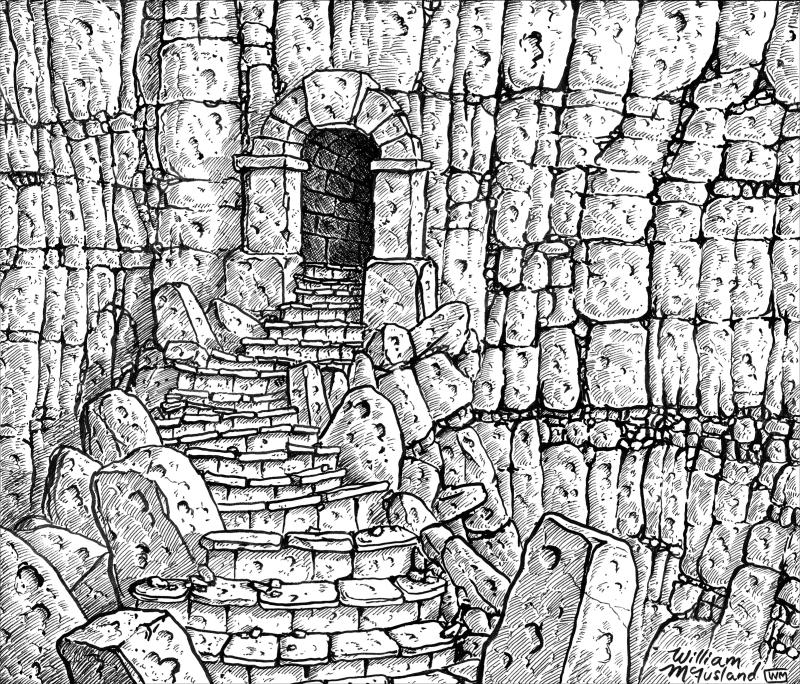 Will this be a 15-Minute Dungeon? by William McAusland (Outland Arts)

These fixes mainly seem to involve giving the PCs more abilities–including at-will powers–so everyone’s always got something to do and can adventure longer before having to rest.

What they have all missed, however, is the root cause of the problem.

Older editions of the game (up to 2nd edition) handle time in a markedly different fashion to later editions. The 1st edition Dungeon Master’s Guide talks a bit about how long it takes to do certain actions.

A quick perusal of the text, gives these examples of actions that take a turn (ten minutes):

Similarly, these actions take one round (one minute):

So, for example, if a party moves 90 ft. while mapping and listens at a door before breaking in and slaying the hobgoblins within after five rounds of combat almost 20 minutes of game time have elapsed. If the party then rest (as they should after combat) before searching the room another 20 minutes pass. One encounter has lasted longer than most 3rd edition delves! In 3rd edition, the same set of actions would take about one minute (give or take).

Now, of course, 1st edition and 3rd edition are very different beasts. Both are excellent games, but they each have a different play style. In 1st edition, careful exploration and resource management is often the order of the day. In 3rd edition adventures are much more “cinematic” and fast paced

But that’s not all. 1st edition has several more advantages in regards to longer adventuring days (while ironically individual characters are much less capable in terms of abilities, damage potential and general endurance). These advantages include:

Is a Hybrid Possible?

I’ve played every edition of D&D and AD&D going, and I’ve enjoyed pretty much all of them. Annoyingly, I find, though, I like some facets of 1st edition more than 3rd edition (and vice versa). I love the d20 mechanic—I think it’s simplicity is genius—but I also enjoy the more “realistic” feel of 1st edition. The more I blog about Old School games and Gloamhold the more I wonder if it is possible to marry the two so you can play Old School Pathfinder.

A hybrid, Old School Pathfinder game would be brilliant and one I’d play in a heartbeat. I fear, I don’t have the time or resources to create such a game but I might put together an Old School Rules Supplement for use with Gloamhold. Although the Gloamhold Campaign Guide will be editionless (as much as humanly possible) the play style’s the thing and there’s not much point creating an Old School megadungeon without Old School rules!

58 Comments Share Tweet Print Email
Categories: Gaming Advice, Gloamhold, GM Advice, Pathfinder Advice
Disclosure of Material Connection: Some of the links in the post above are “affiliate links.” This means if you click on the link and purchase the item, I will receive an affiliate commission. Regardless, I only recommend products or services I use personally and believe will add value to my readers. I am disclosing this in accordance with the Federal Trade Commission’s 16 CFR, Part 255: “Guides Concerning the Use of Endorsements and Testimonials in Advertising.”

58 thoughts on “GM’s Advice: The Real Cause of the 15-Minute Adventuring Day”