I think it’s time to update you all on my Gloamhold progress. As you’ve no doubt noticed over the last few months I’ve been slowly posting up overviews of each main area within the megadungeon along with insights into my design decisions.

I think I’ve reached the point now where I need to start “serious/proper” design. 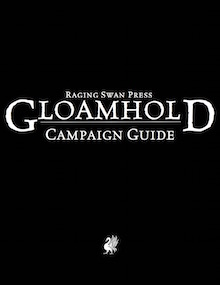 Last week, I carved out some time to think about what a Gloamhold Campaign Guide would look like. (If you know me, you’ll know I work best to a plan)

I’ve received a fair few messages and inquiries regarding the ruleset I’ll be utilising for Gloamhold. I’ve been a little torn on this, but (surprisingly—at least to me) most messages have been in support of making the initial release systemless. This has surprised me as subconciously I’d simply assumed I’d be using the Pathfinder ruleset (and that most of you reading this play Pathfinder).

The more I thought about it, though, the more the idea intrigued me. It would be marvellous to get Gloamhold into as many people’s hands as possible, and this seems a great way of achieving my goal. Thus, I’ve decided the initial campaign guide will be editionless—at least as far as this is possible. Many things (fighters, elves, dwarves, wizards/magic-users and so on) appear in every edition of the game, and even something doesn’t any halfway decent GM should be able to modify these barebones to suit his own setting and ruleset of choice.

I’ve been in discussions with Tommi Salama (who does most of the maps over at Raging Swan Press) and he’s heroically offered to undertake Gloamhold’s maps. That’s tremendously marvellous as I love Tommi’s hand-drawn style and I think it fits perfectly with the Old School feel which will pervade the whole project. All I have to do is contract Tommi and unleash him. First up, is a large scale area map of the Duchy of Ashlar. After that, overview maps of Gloamhold itself are most definitely in order. I don’t know when Tommi will be able to start—I keep him pretty busy with normal Raging Swan stuff, but hopefully we’ll be able to get going soon.

As I alluded above, I’ve spent quite some time storyboarding the Gloamhold Campaign Guide. I’m not ready to share the results of that process yet—I suspect it will change somewhat before I settle on a final version—but it’s given me a great base from which to work. Part of the book will (obviously) encompass detailed descriptions of each main level or area of the megadungeon. It seems like a good idea, therefore, to actually write-up one such area and see how much material I can cram into six pages. (Ideally, each main area will have a six-page writeup, which translates to around 5,000 words).

Thus, I’ve decided to design the Ruins of Greystone as it’s likely one of the first places the PCs will explore. Once I’ve finished a first draft, I’ll post up a PDF here for discussion and feedback. I’m not sure how long that will take and as I’m able I’ll post additional material to Greystone’s page so you can see how things are coming along.

7 Comments Share Tweet Print Email
Categories: Gloamhold, Pathfinder, Raging Swan Press
Disclosure of Material Connection: Some of the links in the post above are “affiliate links.” This means if you click on the link and purchase the item, I will receive an affiliate commission. Regardless, I only recommend products or services I use personally and believe will add value to my readers. I am disclosing this in accordance with the Federal Trade Commission’s 16 CFR, Part 255: “Guides Concerning the Use of Endorsements and Testimonials in Advertising.”

7 thoughts on “Gloamhold Status Update: The End of the Beginning”