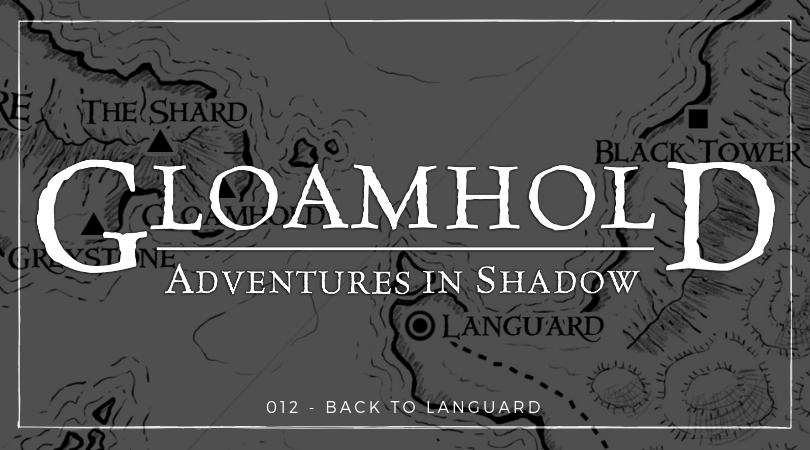 Of the other surviving warrior there was no sign and the party—battered, bruised and running low on spells—decided not to explore the seemingly limitless shaft.

The party had now been in the manor house for some hours, and after a short debate decided to return to Languard to rest and recuperate. But first, Thangrimm declared he wanted to collect some things from the house. These included a stout chest from the Alanen’s now looted hidden treasury and the various bodies the party has discovered (the suppurating halfling in the bath upstairs and the skeleton with a dagger lodged in its vertebrae from another upstairs room. The dwarf felt strongly that both should be buried decently.

Thus, the party left the manor, but the manor’s denizens were not done with them. As the heroes staggered from the manor’s main door, Thangrimm and Johann carrying the chest between them, several more of the foul stone guardians dwelling on the manor’s front facade awoke from their slumber. With a terrible cracking and flexing of their stony wings the creatures leapt from the manor’s walls and swooped ponderously down upon the party.

The party had little stomach for another battle and rushed headlong into the tunnel leading down to the rest of the village. Toliyrath guarded his companions’ retreat and injured one of the beasts with several bolts of pure force. Once his friends were in the tunnel, however, he wisely decided to join them. The stony creature’s screams of frustration echoed through the air, but they did not enter the cramped, gloomy confines of the tunnel.

From here, the party proceeded rapidly down the tunnel, and emerged cautiously several minutes later at the other end (fearing their stony attackers would be awaiting them there). However, of the daemonic flying creatures there was no sign. However, more screams and shouts echoed up to the party from the harbour below.

In the middle of the harbour, a fishing boat seemed to be floundering. Several figures rushed about its deck jabbing downwards into the water with their weapons. As the party watched, the boat upended and began to sink. Several of the figures fell into water, while others clung to the now-sinking wreck. In minutes it was all over and only a smattering of wooden debris floated on the harbour’s fell, black waters.

It seemed clear now to the heroes that something monstrous dwelled in the harbour, but being adventurers of the bravest sort they decided to cautiously investigate. Reaching the harbour, they spotted what looked like an arm clinging to some of the wreckage. Johann shot an arrow attached to a length of stout twine into the wreckage and slowly him and Thangrimm pulled in the section of planking.

Pulling it from the water, they discovered the arm was attached to the remains of a man’s torso. The remains were sheered in two by something that exhibited tremendous force, crushing through the man’s scale mail and bones with seeming ease. There were no teeth marks about the massive injury, which led several of the party to surmise a monstrously vast crab was to blame for the boat’s destruction. The man wore a wide golden band on one finger, and the party took the bauble (later learning it was a magical ring of protection).

By now dusk was falling, and the party were keen to escape these accursed ruins. Signalling Taneli they made ready to depart. Shortly, Taneli brought his vessel alongside the breakwater and the party tumble onboard.

In short order, the boat was clear of the breakwater’s slimy, seaweed wreathed rocks and the heroes were on their way back to Languard and safety.

As they sailed east, night fell. Veronwe and Jeremiah noticed shortly thereafter another fishing boat, seemingly heavily laden, and running with barely any lights making for the Murkwater’s dark, gaping mouth. It seemed the tales of smugglers lairing in Rivengate were true!

Without further incident, the heroes returned to Languard, docking in the High City. A pair of nightwatchmen intercepted the party and levied a small cargo tax on the party’s loot before they could come ashore. From here the heroes visited the The Father’s Hall before returning to the Orc’s Head to rest. At this point Ilmari took his leave of the party, but not before thanking them for his rescue. He entreated the party to aid him in rescuing his friends still lost in, or perhaps under, the manor house, but the heroes rejected his request—they had grown weary of the bald fighter and his apparent lack of enthusiasm for battle.

For several days, the party rested and recuperated. Orm, it turned out, had contacted filth fever from the repeated bites of the giant rats he had slain in the ruined manor and several of his companions had business about town. Thangrimm and Johann visited the Dreaming Spires and Urmas Aalto’s house where they showed the aged sage several of the treasure they had found. (They also left some of these treasure with the sage to aid his investigations). Orm rested under Veronwie’s tender care and Toliyrath seemed strangely absorbed by something.

Thus, the party rested and plotted their next move. It seemed to them that the dangers lurking below the manor were too great and so they resolved to explore more of the tunnels riddling the rock under the village proper…