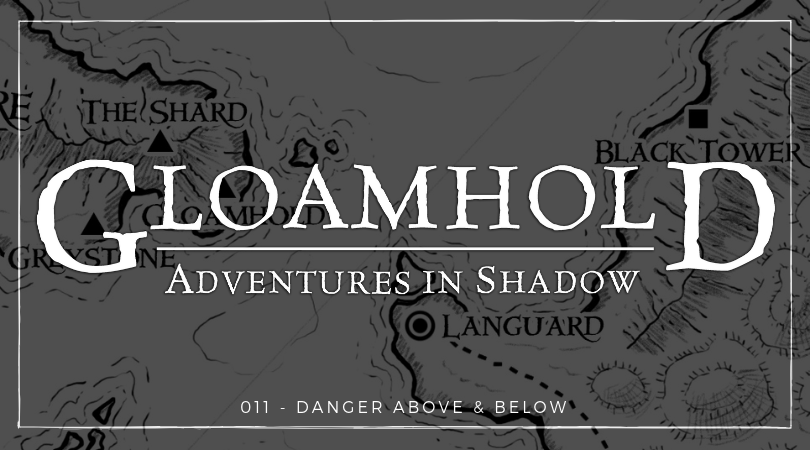 To his—and his friends’ consternation—he discovered the woman within was at best partially human. Brown and red wings grew from her back and her legs ended in furred talons that looked worryingly sharp. She shrieked again, “Go away!” Greeting the “woman” Orm looked around the rubbished-filled room and spotted two partially eaten humans corpses slumped in the corner; both were dirty and clad in the remnants of leather armour and other scraps of clothing.

After a short conversation, it transpired the “woman”— Aghaloth—was lost. She used to live in a large swamp but had been forced to flee after in-fighting amongst her folk living there. She hated living here and wanted to go home. Sensing it likely they could avoid a fight with this seemingly powerful creature Thangrimm drew her a crude map and gave her some of his tasty trail rations. Aghaloth seemed pleased and declared she would leave the next day.

Thankful to avoid a fight, the heroes retreated back into the manor house to plot their next move. Orithur was certain more treasure remained to be found in the attic.

Jeremiah crept up the wooden servants’ staircase to the attic, followed at some distance by the rest of the group. The scout discovered a large attic running the length of the house. Light filtered into the space through several gaps in the ceiling. Hundred of bats roosted among the rafters and several forgotten chests stood amid the gloom. Bat guano covered everything. The chests intrigued Jeremiah, but at that moment a crash from behind him heralded one of his friends putting his foot through a rotten stair. Several other incidents followed and both Orithar and Thangrim were badly lacerated by shards of wood ripping into their legs.

Clearly, the stair was dangerous and could not take weight of a heavy individual wearing armour. The party retreated (again) to plot their next move. Several of the heroes believed the chests in the attic contained valuables as clearly no one had dared the attic in many years because of the vast amounts of bats lairing therein. Still, the party lacked the means to deal with such a vast number of bats and so—reluctantly—they left the bats to their slumber.

The party now turned their attention to the cellars. Returning to the ground floor via the grand staircase they crossed the hall and went to the chapel. Using the small door behind the altar they descended into the tunnels below the manor. The staircase was narrow and gave out into a small chamber. An iron bar gate blocked further progress, but someone—or something—had bent some of the bars apart. Several of the party squeezed through and Jeremiah carefully and slowly picked the gate’s lock—for the gap was so narrow those wearing almost any kind of armour to squeeze through. Thangrimm had taken his armour off to get through the gate, but taking it off and putting it back on again was laborious process and if the party was fleeing from something in the tunnels beyond such an act would likely be a death sentence.

Moving on, the heroes cautiously explored what seemed to be a crypt of sorts. The stubs of many melted candles filled small niches in the walls, To the right, a ramp sloped down into a large hexagonal chamber; burial niches pierced the walls and a great mass of bones and rotting remains covered the floor. Two horribly withered bodies—one a human and one a dwarf—lay atop the pile.

For now, ignoring the room the party pushed on into another room; here, a low wall of cyclopean stone surrounded a deep shaft plunging an unknown distance into the rock below the manor. Orm guessed this was the well of which the faded manuscript they had found earlier that day had spoken.

Keen not to descend yet further for now, the part returned to the hexagonal burial chamber. They quickly discovered the chamber was haunted by two ghosts. One—an old translucent man that resembled the man in one of the portraits hurled himself at the party intent on slaying them while the other—seemingly a small boy—tried to intervene. As they party fled, they heard the small ghost scream in terror and pain before falling silent.

Back in the chapel, the stalwart heroes discussed their next move, for it seemed the dangers of the crypts were too great for them.

Eventually, they decided to explore the other parts of the cellars and descended the servants’ stone staircase into the cellar. They discovered a number of storage chambers and a large kitchen but all had been comprehensively looted. In another room, they discovered many full sacks covered with black dust. Standing at bay in the room were four hideously ugly humans clad in dirty, sweaty leather armour. Clearly, these were the foul folk lurking in the manor. The party—led by Orm—leapt into action. Unfortunately, for the impetuous barbarian the ugly men were skilled warriors. Within seconds, the brawny warrior was down, slashed by four expertly wielded handaxes, in a rapidly spreading pool of his own blood. Veronwe’s magic saved the warrior from death, and a savage battle ensues. The party’s numbers and might, and the aid of Ilmari, proved too great for their enemies. Shouting in a harsh, guttural language which none of the PCs could speak, the enemy were forced back. Two were slain and the final pair of warriors fled down a narrow passageway that looked like it would link up with the chamber containing the ancient, cyclopean wall and the seemingly infinitely deep shaft it protected.

With victory apparently at hand, the heroes prepared to give chase…