It’s game night — snacks are laid out, drinks are in the fridge, the minis are selected, the dungeon map is ready and you’re rearing to go.  There’s just one problem — life happens and only one player shows up. 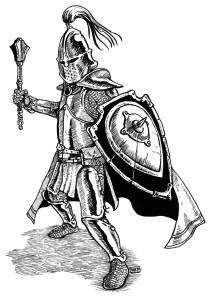 A moment of awkward silence occurs as you mentally flip through your collection of movies while the player tries to figure out how to extricate himself from the situation. However, not all is lost; you could run a solo adventure!

I’ve had some of the most fun in RPGs running solo adventures.  One-on-one with a player allows you both to dig deep into the character and the story elements that you sometimes miss with a normal sized party.  When running a solo adventure, you need to talk with the player and set clear expectations of what he wants to accomplish with the adventure.  This allows you to do a great many, fun things:

Solo quests can be dangerous, particularly if they feature lots of combat, so it’s important to anticipate problems:

Solo adventures don’t have to end in player death. Instead, embrace them as a chance to let the player shine and engage in activities he couldn’t do in the larger group.

6 thoughts on “GM Advice: How to Design Solo Adventures”