In early 579, a neophyte party of adventurers gathered on Ratik’s southern border in the town of Piren’s Bluff to explore Valentin’s Folly, a ruined castle otherwise known as the Shadowed Keep on the Borderland. The crumbling ruin had once been home to Valentin Ironwolf – a famed adventurer of old who had died at his enemies’ hands 40 years ago.

The party found themselves on the overgrown track leading to the Shadowed Keep. While they travelled to the site, Fang related how his father was thought to have died in the keep and that he hoped to recover his remains. 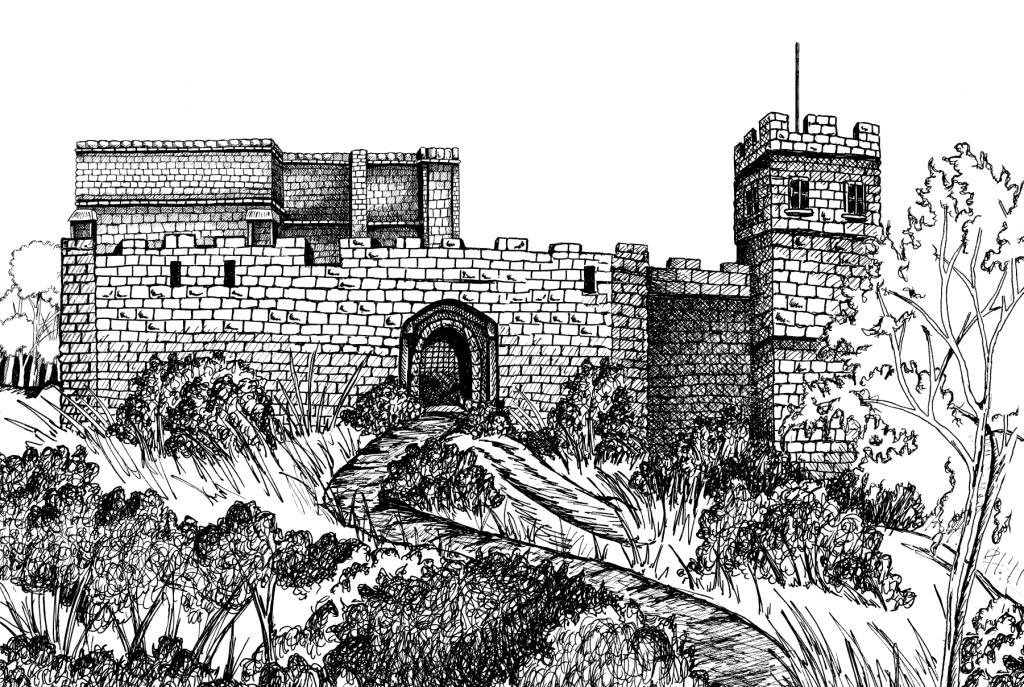 The keep stood on a rocky bluff overlooking a wooded valley and at first glance appeared abandoned. However, the party were not deceived and instead of simply wandering into the courtyard, Kyras crept forward to investigate. Climbing up the curtain wall, he looked into the courtyard. The keep’s main donjon seemed somewhat abandoned – its front doors had long since collapsed, but its watchtower seemed stoutly fortified.

After a brief discussion, the party decided to investigate the ruined donjon first. Creeping inside they discovered broken furniture, wind-blown leaves and the general leavings of civilisation. The structure was not entirely unoccupied, however. In one chamber they discovered (and slew) a pair of lairing snakes while in another they fought three giant rats. During the course of these explorations, the party discovered Urbren was scared of snakes! Most of the rest of the chambers on the ground floor were abandoned, but the party did recover some small treasures missed by previous explorers and found a set of stairs leading down to the keep’s cellars.

The donjon’s great hall, however, was to present their greatest challenge. Within laired two gigantic spiders which were alerted to the party when they unwrapped the chains securing the chamber’s double doors. Lurking amid the shadows clustering about the chamber’s high ceiling, the spiders pounced, but were slain by Kyras and Fang. With their foes slain, the heroes recovered more treasures – some from the bodies of previous explorers cocooned in the spiders’ webs – and discovered a winding stairway up to the first floor…

1 Comment Share Tweet Print Email
Categories: Borderland of Adventure, The Next Generation
Disclosure of Material Connection: Some of the links in the post above are “affiliate links.” This means if you click on the link and purchase the item, I will receive an affiliate commission. Regardless, I only recommend products or services I use personally and believe will add value to my readers. I am disclosing this in accordance with the Federal Trade Commission’s 16 CFR, Part 255: “Guides Concerning the Use of Endorsements and Testimonials in Advertising.”

One thought on “The Next Generation #1: The Adventure Begins”