I rushed out of class, Amorphis’ Tales from a Thousand Lakes blasting on my headphones. My schoolbag, covered in a menagerie of metal band patches, dragged low to the ground. I didn’t recall much from last hour’s math teachings, as my mind was on a totally different plane, thinking about how my players had just unlocked the clue to enter the next dungeon. 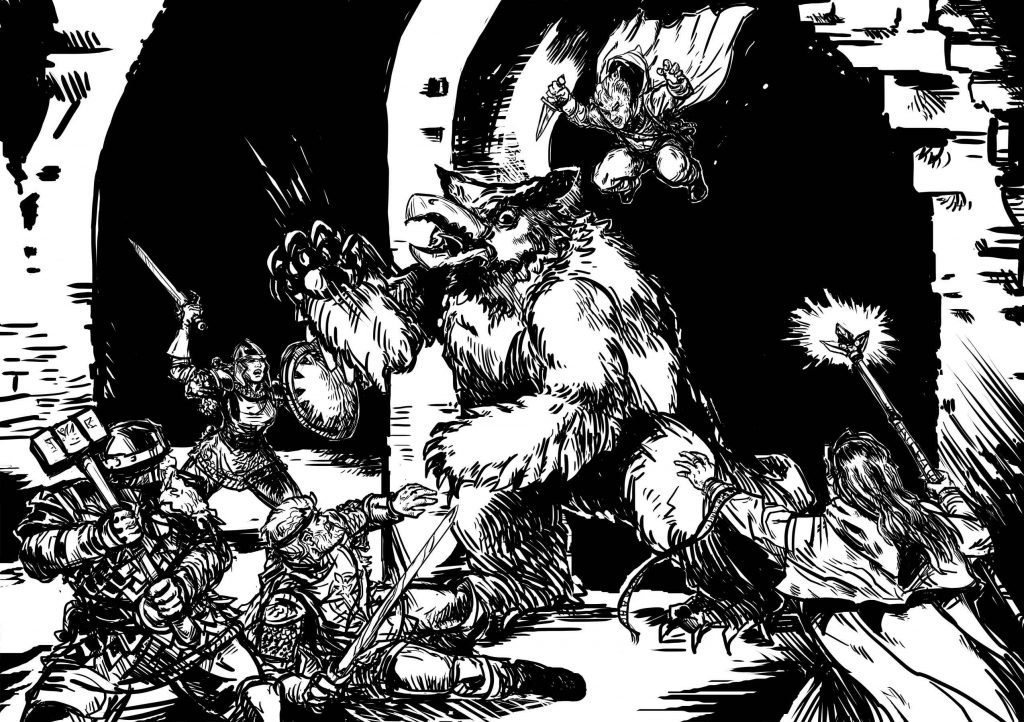 “What was gonna happen next? It had to be epic, surely, it had to surprise them. And what if they…”. I reached the school gate and stopped. Flanking the exit, the school bullies awaited me. With their sneering faces and clean-shaven heads, it was clear they weren’t just going to let me pass. I never quite understood their Australian sports clothing. And they clearly didn’t share my exalted taste in music. Or D&D for that matter…

When I came home later that day with painful ribs (again) and shaken confidence, it struck me how much preparing for a D&D session was like those bullies at school. You set out with a million ideas and energy to singlehandedly take down a mountain giant, but somehow always come out bruised and beaten.

Just when you think you’re ready to pack up and go home, those bullies are waiting by the gate to punch you in the face. Prepping D&D game sessions is hard work, maybe even somewhat intimidating.

There must be a way to avoid the bullies, right? But somehow, it seems almost impossible to get through it without bruised ribs, and you wonder if it ever gets easier. Even when you promise yourself “this time I’m gonna take it easy and not get sidetracked by a million little details…”, four hours later you find yourself surrounded by frenzied notes, and stacks of books. You have to admit you’re lost and nowhere near feeling properly prepared for next game session.

So how do we stand up to the bullies? How do we say “enough is enough”? How do we tell them their techno sucks and their bald heads make them look like a Right Said Fred music video? Over the years, I’ve learned the first step is to accept that you’re never going get it perfect. D&D is a very open ended game (otherwise it wouldn’t be fun at all) and your players LOVE taking a left turn when you planned for a right. Instead of trying to prepare for every possible situation, I started to focus on being good at “winging it”.

One thing I found extremely insightful was an article by Dan Goldstein about improvisation for actors. Or you could use player aides like random encounter cards, NPC cards or online random generators such as Donjon. At the end of the day it came down to letting go of the safety net of excessive prep, and trust that I could do a great session with just my GM skills and a few aides. After a few sessions, I started to really own it and it totally refreshed my enjoyment of the game.

The better I became at improvising, the more I trusted to let go of the pre-written path. My players also enjoyed it, because it reinforced the feeling that anything was possible. It kept them on their toes, guessing what was around the next corner. Ultimately it brought us closer to what (in my opinion) a roleplaying game like D&D needed to be. Over time, my confidence grew, and I realized I finally had the courage to stand up to the bullies. They had nothing on me and quickly learned to fear the strike of my Masterwork Metalband Patch Adorneth Schoolbag ‘o Doom…

What is your experience prepping D&D games? How did you overcome your bullies? Or, perhaps you can still do with some tips? Shout out in the comments below! Share this blog post and tag a GM that will love this read!

Chris can der Linden is the supremo at LoreSmyth, a small (but epic) indie publisher. They are the creators of the best selling adventure The Claws of Madness, (for Pathfinder and 5e) the highly anticipated Remarkable Inns guide and HD quality modular dungeon tile sets.

Thank you, Chris, for contributing this article. Improvision is something I particularly struggle with and so I much appreciate your contribution.