Named for the adventurer credited with discovering this gigantic sinkhole cutting through the Mottled Spire living rock, Varma’s Pit is nothing more than a huge hole piercing the rock above the Twilight City’s crumbling, shadowed precincts. Hidden among a great stand of stunted, wind-blasted thorn bushes and dwarf trees, it is hard to find. To make matters worse, its walls and ledges are inherently unstable and crumble if unduly disturbed. If that wasn’t enough to deter explorers, centuries of bat guano deposits make climbing here all but suicidal. 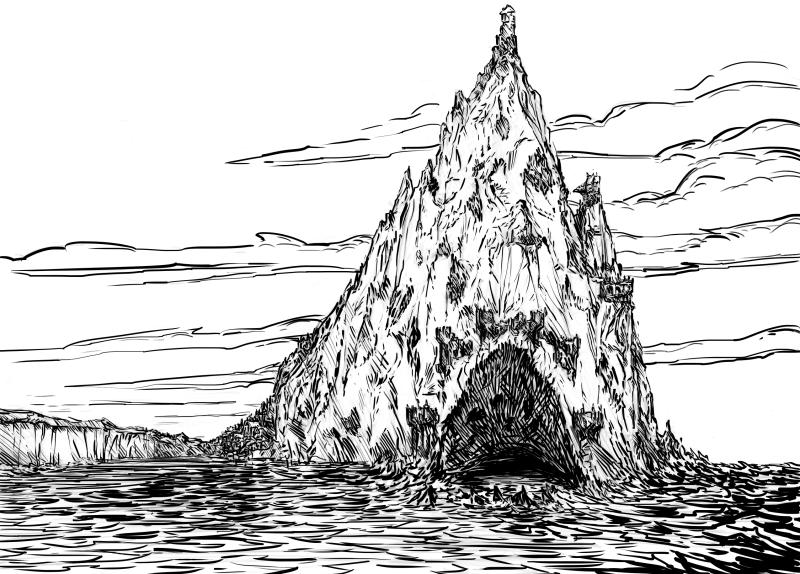 Vast colonies of bats—some monstrously huge and others strangely deformed—nest in the Pit’s walls and emerge at night in a near-constant stream to hunt in the fresh open air. Ever hungry, persistent stories circulating among adventurers bestow these bats with a sinister, preternatural hunger for warm flesh.

Even so, Varma’s Pit holds a special attraction to adventurers. For on the brightest of summer days, when the sun’s golden orb is directly overhead, its rays cuts through the deep gloom below to caress the uppermost portions of the Twilight City’s many ruined ziggurats almost 1,000 ft. below.

The fate of Varma herself remains unknown. After she discovered it was—in theory—possible to reach the Twilight City without having to dare the Murkwater’s treacherous tides, Varma spent months organising a secretive, but well-funded and equipped, expedition to explore the so-called Pit and to find a route down to the city far below. A trickle of survivors—mainly porters and men-at-arms—straggled back into Languard a month after the expedition set out, but all they could report was that Varma and her companions descended into the Pit early one morning and never emerged.

The following night, a vast storm of carnivorous bats burst forth from the darkness and set upon those awaiting their mistress’s return. The survivors fled, and Varma’s fate—and that of her companions—remains a mystery.

Varma’s Pit is also known as the Cave of the Long Drop and Slaughter Fall (both named after Varma’s supposed fate).

Check out the main Gloamhold page, if you are new to this upcoming megadungeon! Dare you explore its gloomy depths?