I’ve previously written loads of articles about good dungeon design. However, I haven’t thus far listed the things you absolutely should not include in your dungeons.

Here—in no particular order—are three things you should avoid in your dungeon design.

There’s nothing wrong with having unavoidable encounters in a dungeon. (Often the “boss” encounters falls into this category). I’m also not particularly fussed about the inclusion of unkillable or virtually unkillable opponents (balance isn’t all its cracked up to be, after all and there is always someone tougher than yourself).

Designing encounters the party cannot win and cannot avoid is a spectacularly bad idea. (Particularly if you are deliberately designing the encounter to kill characters; some GMs do this for “story reasons”—sob).

Such encounters degrade the players’ ability to make meaningful choices and lead to frustration and anger. Normally in such encounters, the party are wiped out or only survive through the GM’s clumsy intervention. (Perhaps the GM has an NPC in the party who saves the day or the monsters inexplicably stop attacking because the GM is merciful).

Players love to win against the odds. Some of my most memorable gaming encounters come from clever tactics or heroic sacrifices. None of my most favourite gaming memories come from the GM saving the day.

Areas that make no logical sense—except in very narrowly defined situations such as in the lair of a mad archmage—are normally a bit pants (that’s a technical phrase meaning bad design).

You should have a rational explanation for notable effects or strange locations in your dungeon. The PCs might not always figure out the details (and that’s fine). But, if the effect doesn’t make sense to you, describing it accurately and engagingly becomes that much harder. The rationale that “it’s caused by magic” can also crush the players’ suspension of disbelief which is—obviously—a bad thing.

Sure—of course—sometimes small sections of a dungeon are linear. Perhaps the dungeon entrance leads to a guardroom or you have to go through the torture chamber to get to the cells. That’s all well and good.

The worst example of this I’ve ever seen is the dungeon map for Barrow of the Forgotten King. Check out this map: 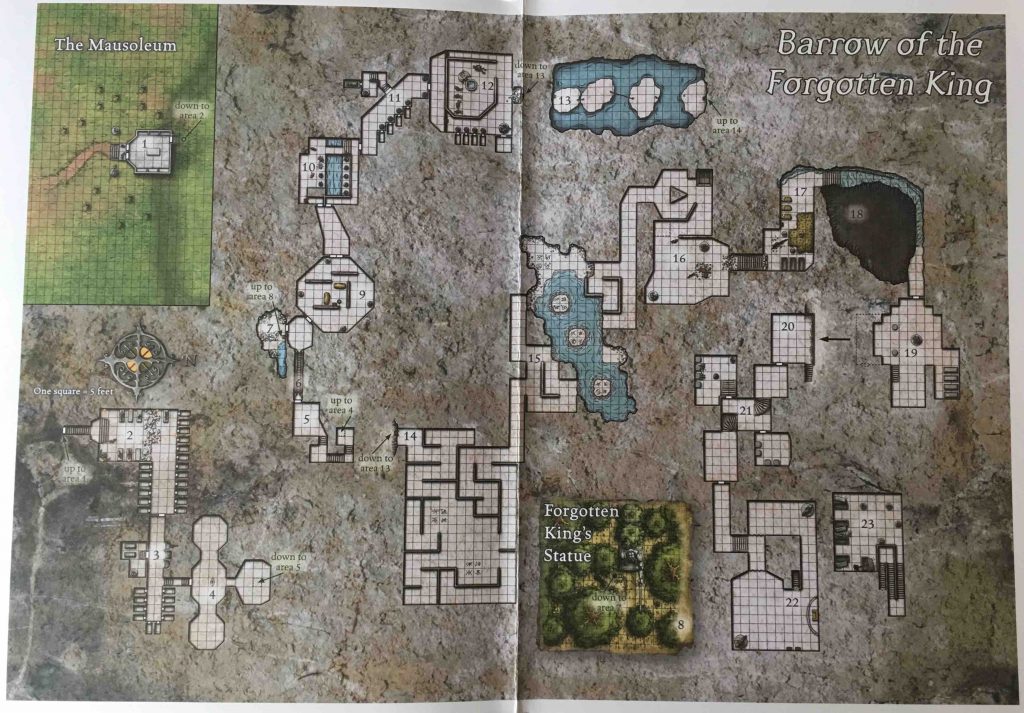 The Worst Dungeon Map Ever?

This is truly the nadir of dungeon design. The players have essentially three choices in any given encounter: go forward, go back or rest. Isn’t that exciting?

So I’ve told you what not to include in the above article. Here are some articles I’ve written about good dungeon design.

Did I miss anything that personifies bad dungeon design? Let me know, in the comments below.

11 Comments Share Tweet Print Email
Categories: Creighton, Gaming Advice, GM Advice
Disclosure of Material Connection: Some of the links in the post above are “affiliate links.” This means if you click on the link and purchase the item, I will receive an affiliate commission. Regardless, I only recommend products or services I use personally and believe will add value to my readers. I am disclosing this in accordance with the Federal Trade Commission’s 16 CFR, Part 255: “Guides Concerning the Use of Endorsements and Testimonials in Advertising.”

11 thoughts on “3 Things to Avoid When Designing a Dungeon”