At the end of last session, we left our heroes striving to slay Ardathanatus and his vrock bodyguards. The fight raged on.

The strange field stopping over half the party from joining the battle was finally identified as a repulsion effect. Sadly, however, Karelia was unable to dispel it and so it persisted (until later events overcame it).

Meanwhile, Ausk succeeded in slipping Hell’s Vengeance into its “lock” on the Doomsday Door. His success was short-lived as moments later a vrock tore the heroic priest to pieces.

The fight stood on a knife’s edge; many of the party were running low on hit points and healing and although the vrocks were eventually killed or forced to flee Ardathanatus stubbornly remained fighting.

The foul cleric dispelled the fly Karelia had cast on Thaladan and Vesleng was forced to cease his attacks on the cleric to save Cortanna from near certain death at a vrock’s claws (and talons and jaw). A conjured air elemental failed to injure or capture Ardathanatus in its whirlwind attack.

However, slowly the tide of battle began to turn. A sleet storm destroyed everyone’s vision which enabled Vesleng to take Heaven’s Fury from Cortanna and insert it into the second lock—sealing the Doomsday Door. Infuriated, Ardathanatus pursued Vesleng, who suddenly transformed into an elephant in midair in an attempt to crush Demogorgon’s follower. However, as he fell, he snagged a tusk on the door and missed Ardathanatus, instead landing on and crushing Ausk’s already mangled body.

When Ardathanatus realised the door had been sealed his wrath was great. With no regard for his own safety, he brought down the ceiling with an earthquake burying himself, Thaladan, Cortana and Vesleng under tons of rock.

As the shaking subsided, the party still trapped outside the room discovered the repulsion effect had ended. They rushed to extricate their friends. A few minutes frantic digging had all the surviving members released. Vesleng—now in earth elemental form—moved through the rubble to find Ardathanatus, but could not locate him. Karelia did hear muffled spellcasting from the beneath the rubble and identified the spell cast as meld into stone. 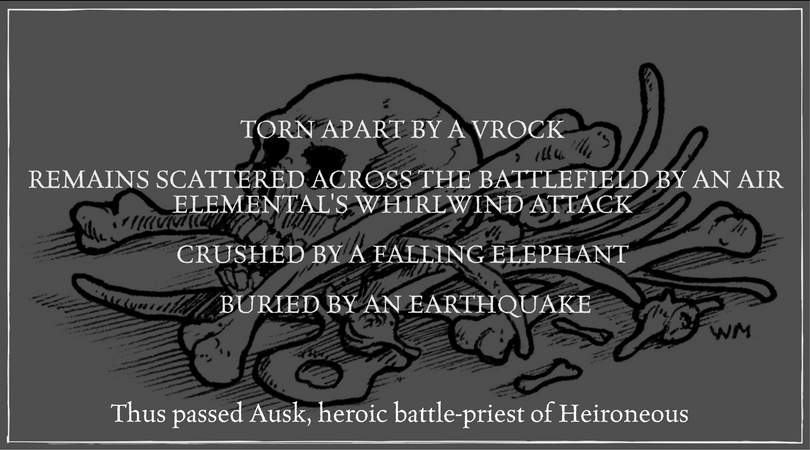 One thought on “Shattered Star #91: The Fight Rages On!”