At the end of last session, we left our heroes battling Ardathanatus and a pair of fearsome vrock guards.

The battle raged on. In the outer room, the vrock fighting Vesleng’s companion was swiftly slain, but the one closest to Ardathanatus proved irritatingly resilient.

Ardathanatus now beset by Thaladan, Cortana and Karellia unleashed powerful magic by uttering words of terrible blasphemy. Such was the evil redolent in his voice that all three of the heroes were weakened and paralysed. Ausk—rushing to their aid—removed the paralysis from two of his companions, but Karelia was around the corner and Ausk was unaware of her fate.

Freed from the paralysation, the paladins fought on, but Ardathanatus frustrated their efforts to kill him by using air walk to climb far overhead. Cortana resisted another attempt to be bull rushed through the blade barrier and discovered he was still unable to move toward Ardathanatus. Meanwhile, Thaladan fighting mightily nearly slew the remaining vrock, forcing it to flee on the wings of a teleport .

The party’s respite was short-lived, Moments later two more vrocks appeared in the chamber. By now, the rest of the party had failed to breach the strange ward protecting Ardathanatus and could do little to help their fellows.

As the fight wore on, the heroes trapped outside the room slew another vrock while Ausk carried Hell’s Vengeance all the way to the Doomsday Door. 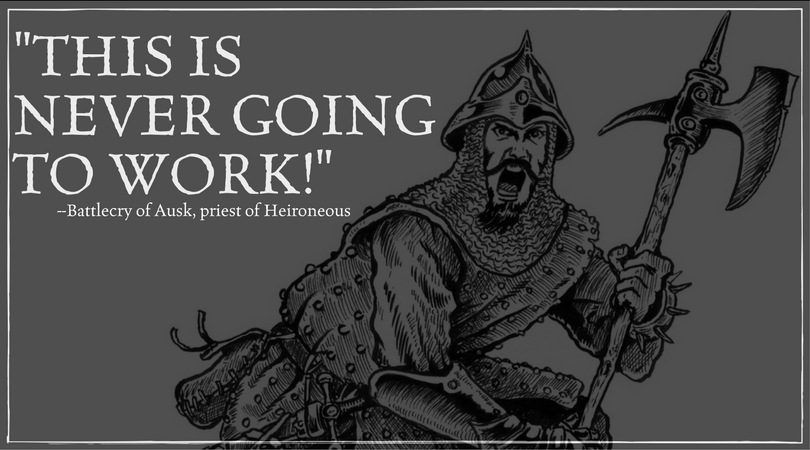 The remaining vrock gave chase as the two paladins, joined by a newly-recovered Karelia (who immediately cast fly on Thaladan) and Vesleng, fought on against the powerful follower of Demogorgon…

One thought on “Shattered Star #90: How Many Vrocks?”