It seems to me that with the advent of 3.0 D&D, magic items became less wondrous and more of a commodity. They went from things to adventure for to things you could pop down the shops to get. That never really worked for me and—luckily for me—Gary Gygax himself agreed with me! 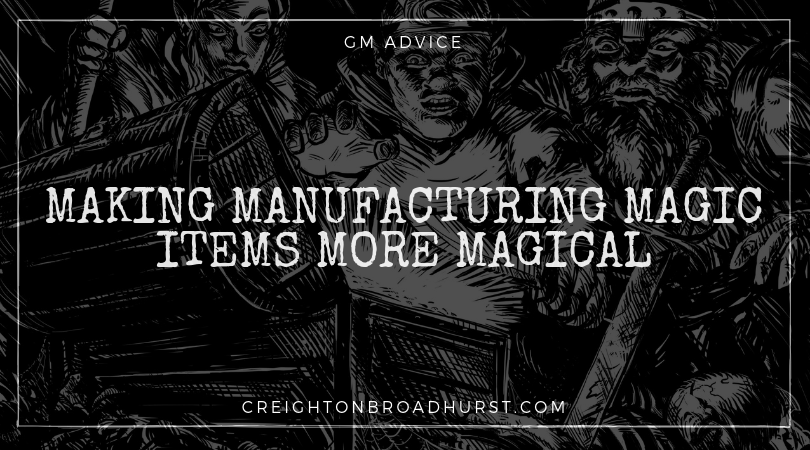 “A properly run campaign will be relatively stringent with respect to the number of available magic items, so your players will sooner or later express a desire to manufacture their own.”

I was recently asked by a reader how to make crafting magic items more wondrous. She was worried that in her campaign the entire process had been reduced to mundane bookkeeping.

Well, I think the answer is pretty simple: make making magic items harder. Here’s a very brief summary of how you make magic items in 3.0/3.5/Pathfinder:

Now, lets look at how you crafted magic items in 1st Edition AD&D.

Clearly in 1st Edition AD&D, the whole process of making magic items was much harder than in 3.0 and later editions. That’s either a good thing or a bad things (depending on your perspective). The salient points seem to be that in 1st edition:

These factors have the knock-on effect of reducing the number of magic items available in the campaign; after all there are fewer higher level spell casters than lower level.

Sadly, to make magic items—particularly potions, scrolls and wands—more wondrous in a Pathfinder game will require some rules tinkering. This is not for the fainthearted, and should only be done after chatting with the rest of the group. While I firmly believe that a GM is in charge of his game and campaign world, such a major change requires discussion with the players. Magic items are, after all, one of the foundational aspects of the game.

The easy way to make this work in a campaign is just to increase the caster level pre-requisites for the various Item Crafting feats. Here’s my suggested list:

Of all the classes, this affects wizards the most as they get Scribe Scroll at 1st-level and get bonus feats at 5th and 10th which can be used to get additional item crafting feats. To offset the loss of the various Item Creation feats, I’d simply add Spell Focus, Greater Spell Focus, Spell Penetration and Greater Spell Penetration to the list of feats a wizard can pick with his bonus feats.

You might also consider changing the time it takes to craft an item.

Do you want to make magic items rarer in your campaign? Alternatively, am I mad–would this destroy the game for you? Let me know, in the comments below.

29 Comments Share Tweet Print Email
Categories: Gaming Advice, GM Advice, Pathfinder Advice
Disclosure of Material Connection: Some of the links in the post above are “affiliate links.” This means if you click on the link and purchase the item, I will receive an affiliate commission. Regardless, I only recommend products or services I use personally and believe will add value to my readers. I am disclosing this in accordance with the Federal Trade Commission’s 16 CFR, Part 255: “Guides Concerning the Use of Endorsements and Testimonials in Advertising.”