At the end of last session, we left our PCs plotting their next move. With the silver pools no longer functioning, the party decided to return to the highest part of the island to investigate the northern beach and the canal that so mysteriously disappeared into a dark cave.

Setting out immediately, the party reached the northern coast without incident and quickly discovered the cove they sought. Looking down from the cliff top gave them a different perspective. From their vantage point, they could see 60 or so villagers slaving away—seemingly engaged in digging out the canal.

Several of the heroes spotted a rough, steep set of steps cut into the cliffs leading down to the beach. After a brief discussion, the party dared the perilous stair. The villagers seemed oblivious to the party’s approach—luckily as the stair would be a terrible place to stand and fight—and they reached the bottom without incident.

Even when they reached the beach and the canal, the villagers still ignored them. It quickly became obvious that the villagers were under some kind of magical domination. Grooble tried to break the effect by casting protection from evil, but this only resulted in the villager going mad! The heroes were forced to beat him into unconsciousness.

The remainder of the villagers still ignored the adventurers and so they decided to explore the cave. However, this triggered a reaction from the villagers; two of them hefted their crude shovels and moved to attack. Using nonlethal force, the party met their attackers but just as they knocked them unconscious another two villagers moved to attack. And another pair. And another pair.

Soon, the party were in a pitch battle with over 20 villagers! Most of the party used nonlethal force, but Sarif—exploring the cave—came upon a dozen or so villagers mining the cave wall. They seemed to have discovered an ancient foundation wall and were trying to break through. Seeing this, Sarif attacked with lethal force to slay the near-helpless and unresisting miners. Spotting the unfolding slaughter, Zainnis started shooting the ones nearest the homicidal dwarf with blunt arrows—knocking them over before Sarif could get to them.

Outside, the battle was going the party’s way. Although their attackers were numerous, they were malnourished and clearly in no state to fight. However, as the party’s prowess began to tell four fishy frogmen emerged from the canal. They commanded the party to leave, but shockingly the heroes ignored the warning.

When the frogmen moved to attack, Karelia finally started to unleash powerful magics. An illusionary fireball followed by a real fireball confused and then killed the frogmen before they could do much damage.

Meanwhile, Cortana had made it through the cave, around the canal and to the other side of the beach. Oblivious to the slaughter in the cave, he watched the action on the beach, but took no part in the violence; indeed the villagers on “his” side of the beach were ignoring the battle and continuing their work.

With the arrival of a second set of frogmen, however, he turned back to aid his fellows. Doing so,  brought him to the scene of Sarif’s slaughter. By now, the dwarf had retreated toward his fellows because he had heard the sound of mining from the other side of the wall and was convinced someone—or something—was trying to break through.

On the south side of the beach, the battle grew more intense, and mistakes were made. Thaladan—trying hard not to actually hurt any of the villagers—accidentally decapitated one unfortunate old man while Narfu broke another’s scrawny neck. As the battle wore on, Zainnis’ leopard companion also began to fight—rendering and tearing at the villagers.

On the way back to his friends, Cortana stopped at the site of Sarif’s battle and examined the scene; he tried to stabilise some of the villagers who yet might live and took note of the many blunt arrows scattered about. 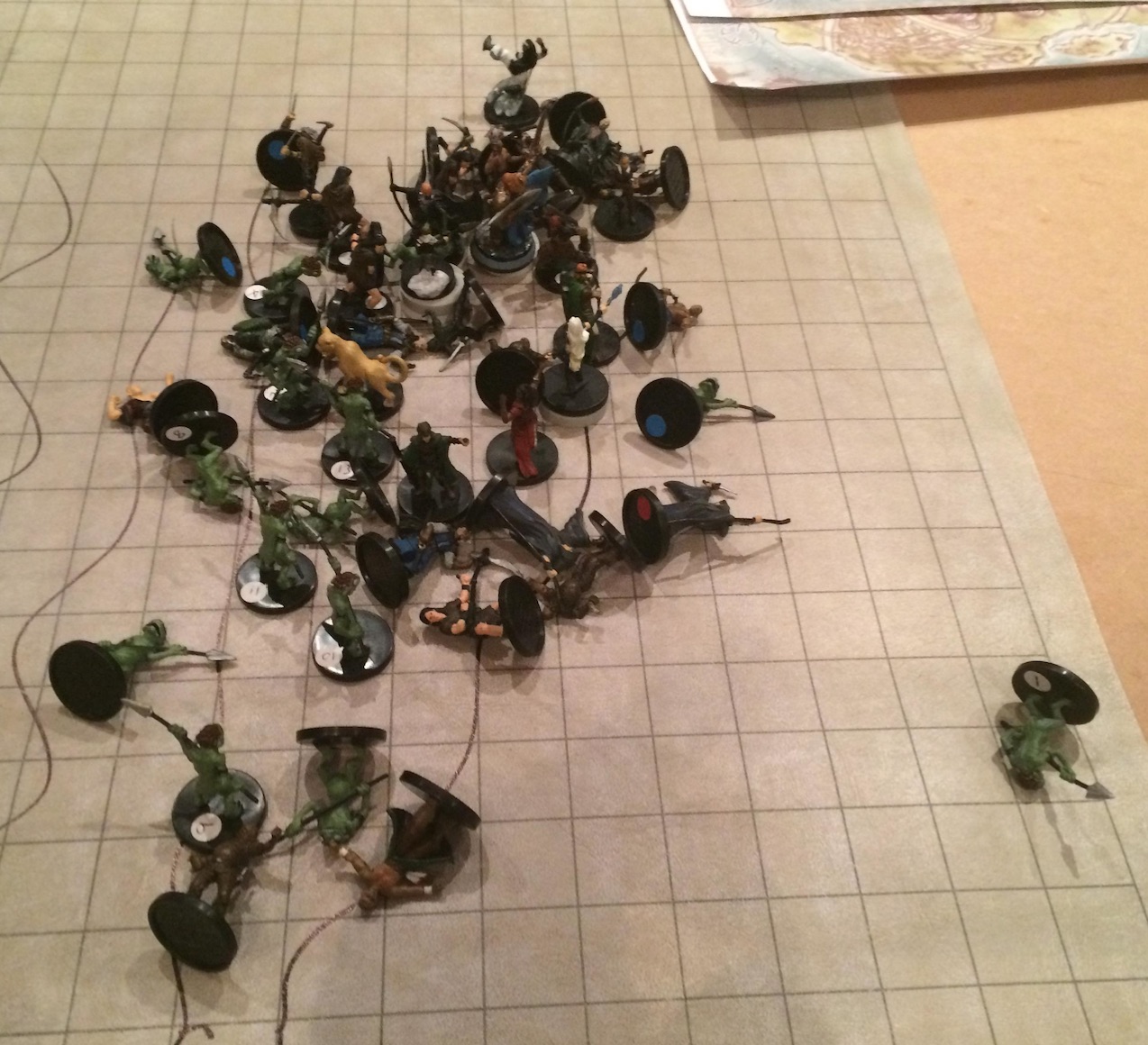 Why Not Play “Spot the Gnome”?

By now, the party had all but won the battle on the southern side of the cove. Most of the villagers had been knocked unconscious and a second set of frogmen (and some unconscious villagers) had been incinerated by another of Karelia’s fireballs.

Finally, with the death of the second set of frogmen, the villagers from the northern side of the canal began to move to their comrades’ aid. Zainnis met them with a hail of arrows and for the moment none could navigate a way through the body-strewn cave to the southern beach. Sadly, though, just as the heroes thought they had the upper hand, another group of five frogmen emerged from the canal, clambered up onto the beach and moved to attack…