As befits a proper megadungeon, Gloamhold is huge. It has many different levels and sub levels for brave adventurers to explore.

A few weeks ago, I was asked to post a basic map showing how Gloamhold’s various levels connect together. Here is the result: 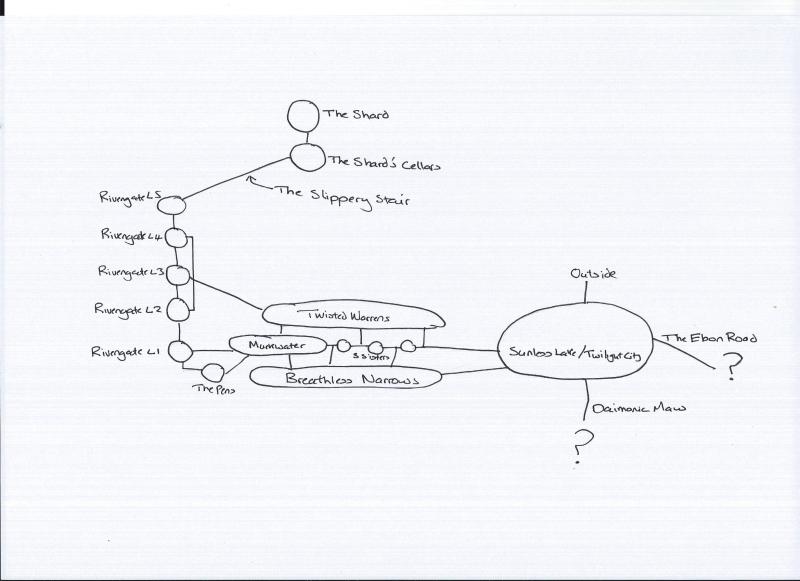 Remember, when looking at this map that:

I found drawing this map tremendously useful. It really helped me visualise the possible flow of any exploration. It shows three main ways into Gloamhold: either through Rivengate, via the Shard and its cellars or through the holes in the cavern roof high above the Twilight City. It also highlighted to me just how much lies between Rivengate and the Sunless Lake. I also like mystery–I’m a fan in not detailing everything from the start–so at this point I’m not yet ready to reveal what lies at the bottom of the Daemonic Maw or at the end of the Ebon Road.

So, what do you think of the map? Are there enough inter-connections? If not, what should I add? For example, the Twisted Warrens could conceivably link to the Sunless Lake; a lost or torturous connection could also exist with the Shard’s cellars and so on. Let me know in the comments below, and help me build a better Gloamhold!

6 Comments Share Tweet Print Email
Categories: Gloamhold, Pathfinder, Raging Swan Press
Disclosure of Material Connection: Some of the links in the post above are “affiliate links.” This means if you click on the link and purchase the item, I will receive an affiliate commission. Regardless, I only recommend products or services I use personally and believe will add value to my readers. I am disclosing this in accordance with the Federal Trade Commission’s 16 CFR, Part 255: “Guides Concerning the Use of Endorsements and Testimonials in Advertising.”

6 thoughts on “Gloamhold: The First Map”