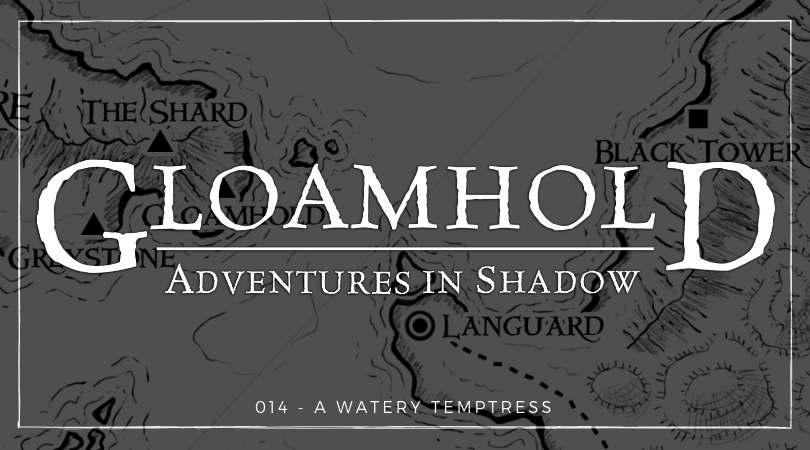 Following, a rambling circuitous route, they followed a passageway slowly rising upwards. Eventually, the party’s scouts spied faint daylight from ahead and the heroes cautious advanced into a large cavern. Guano covered the floor—Jeremiah noticed the guano was not like that they had encountered in the Alanen’s forsaken manor. Some of the lumps here were the size of a horse’s manure, suggesting a bat of truly monstrous proportions. Sure enough, in a side cave the party discovered two huge bats. The bats attacked the intruders, but were quickly slain. Minor treasures—including a magic scroll—were recovered from the piles of guano—and the party plotted their next move.

After emerging from the caves and exploring the remains of a ruined tower squatting on the ledge above the bat cave’s entrance the party judged they had about an hour before the tide would be fully out and they could explore the sunken tunnel below the Storm Mistress’s Hall. With that in mind, they turned back into the caves and explored another set of seemingly abandoned passageways leading roughly northwards.

Here, the cavern split in twain—both passageways leading downwards. The first passageway ended in a rockfall—which the party judged was likely the result of a deliberate collapse at some point in the past. The other passageway led further downwards, but as they descended the natural stair, Thangrimm triggered a cunningly-hidden trap. From an alcove in the ceiling a rusty battle-axe swung down at the party; Thangrimm, twisting aside, was only slightly injured, but Jeremiah was less luckily being badly injured by the axe as it lodged itself in his shoulder.

Veronwe’s magical healing restored the two to health, but this new development gave the party pause. No doubt, more traps lurked beyond in the twisted dark, and the party were conscious of the tide’s remorseless retreat. With this mind, they retraced their steps and made their way to the Storm Mistress’s Hall.

Resting and recuperating after their ordeal in the dark below Greystone, they laid their plans. Shortly, thereafter the party entered the hall and let Thangrimm down on ropes into the ceremonial pool. He quickly cleared away some of the fecund seaweed to reveal a water-filled passageway leading away roughly to the north. It seemed the passageway had at one point been bricked up, but much of the rudely-crafted wall had since collapsed. Beyond the collapse, the waterway widened out and the plucky dwarf advanced—only to discover the water was almost deep enough to drown him—being almost four-foot deep! Veronwe followed on behind the dwarf and had considerably less trouble advancing. The rest of the party followed.

After about 60 feet or so, the passageway split into two. Three seaweed-mounded ledges pierced the walls, and among the faintly glowing seaweed, the party spied the jagged shards of cyclopean walls. Forcing his way to the nearest ledge, Thangrimm began to clear a path through the tangled mass. Moments later, a soft lilting female voice speaking in Elven came from the largest ledge to the north. Amid the seaweed something was happening. Some of the weeds began to gently undulate and a form seemed to flow outwards from the fronds. In moments a beautiful elfin woman—naked as babe—stood before the party. Again she spoke, suggesting that Thangrimm should stop what he was doing. The beautiful woman introduced herself as Luestiss. Many of the party did not trust her, but Johann and Veronwe quickly came to the conclusion she was a rare form of dryad—a sea dryad who dwelled under the roiling ocean waves. In transpired, she had been trapped here for many years by the thing in the harbour—and was very lonely.

Chivalrously, the party offered to help her they and escape, but their plans—involving a barrel of seawater—did not meet with her approval. She was a creature of the sea and to be separated from the life-giving vitality of her native environment would dangerously sicken her. She has once had a home far to the south, but this cavern was now her home. Again, she explained how lonely she was and how one or more of the party would be welcome to stay with her. Veronwe seemed the particular object of her affections and he warned his friends that sorcery lurked within her words. Still, he sensed no malice in her.

Talk turned to why the party should not investigate the eastern ledge. Luestiss explained a creature of the weeds dwelled therein. Hearing this, the party leapt into action to slay the foul beast—perhaps in a bid to impress Luestiss. Thangrimm and Orm—redoubtable warriors—led the way. As the heroes gained the ledge and pushed passed a couple of low, ruined walls Thangrimm spotted an undulating mound of seaweed. As he readied himself for battle, and shouted a warning to his friends, the weeds all about the party begin to writhe and undulate—grasping at their legs and practically holding many of the heroes immobile. As Thagrimm and Orm struggled through the morass to close with their enemy, a thick wedge of weed fronds shot out and wrapped itself around Orm’s neck. Quickly, the thing began to throttle the young barbarian. Tolirayth leapt atop a wall and hurled magic force bolts at the beast while Thangrimm hewed mightily at the beast. Seeing Orm going purple, Veronwe filled the area with healing magic keeping the warrior from death. Desperately, Thangrimm continued hewing at the beast and eventually he struck a vital spot, slicing the great frond in twain. At that, the mound released Orm and begun convulsing in agony. In moments, it lay dead at the party’s feet.

3 Comments Share Tweet Print Email
Categories: Adventures in Shadow, Creighton, Gloamhold, Pathfinder
Disclosure of Material Connection: Some of the links in the post above are “affiliate links.” This means if you click on the link and purchase the item, I will receive an affiliate commission. Regardless, I only recommend products or services I use personally and believe will add value to my readers. I am disclosing this in accordance with the Federal Trade Commission’s 16 CFR, Part 255: “Guides Concerning the Use of Endorsements and Testimonials in Advertising.”

3 thoughts on “Adventures in Shadow #014: A Watery Temptress”