Urban adventures are an essential part of many campaigns. However, more than once in my campaigns I’ve had adventurers—or indeed entire parties—insist they are clanking around town with all their equipment, weapons and armour (just in case). Variously this can include full plate armour, lances (strapped to your back naturally) and more. 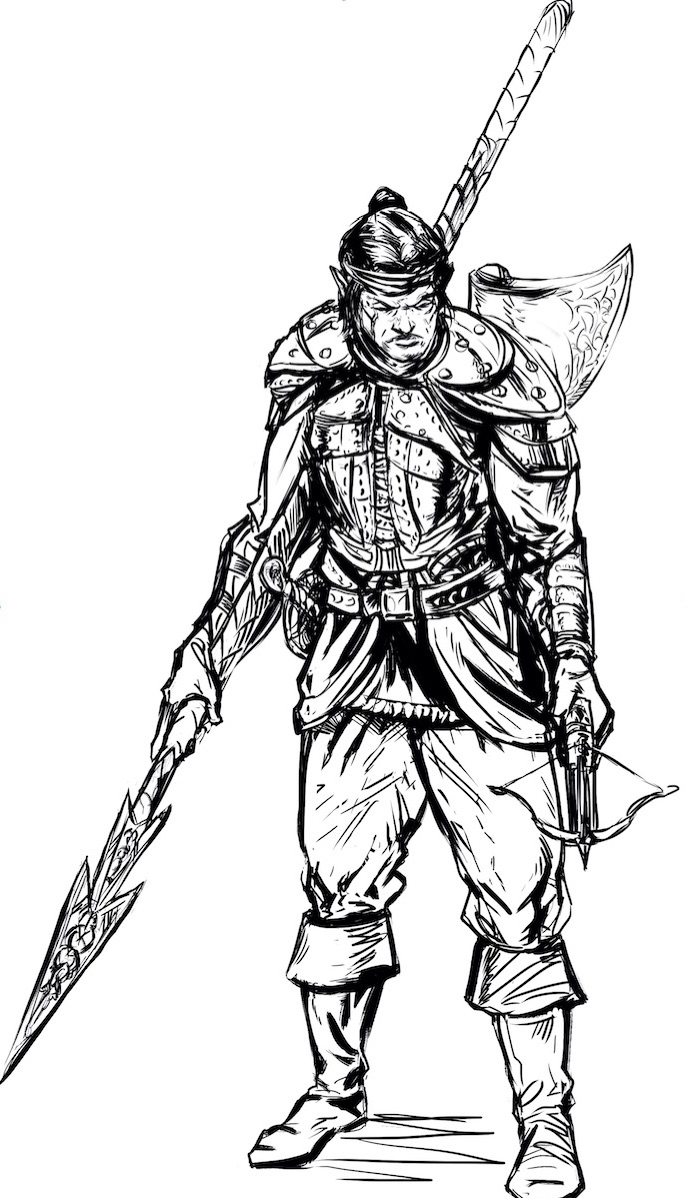 This is somewhat an unrealistic situation. I mean how often do you go into town to do some shopping wearing a 50 lbs. backpack and carrying a rifle? (And anyway, behold, the Fallacy of the Adventurer’s Backpack!)

Adventurers are—for example—often heavily armed, heavily armoured and heavily equipped. That’s fine while they are on an adventure or exploring the wilderness, but do they *really* drag everything around town or down to the local pub for a drink? (And even if they want to, do the local laws allow them to do so?)

What’s needed is an adventurer’s EDC.

What’s an EDC, I hear you ask? Simply put, EDC stands for Every Day Carry—the things you carry on your body every day that make your life easier or safer.

An adventurer’s EDC is going to be spectacularly different to your personal real world EDC, but I thought it was a fun concept to explore. What would an adventurer carry about town? As the characters in my Shattered Star adventure are likely to be spending some time in a large urban area in the near future, this is a subject close to my heart.

The wise and prepared player prepares ahead of time a list of the stuff his character wears or carries around in his down-time. (Anything that speeds up game play and reduces potential arguments is—in my book—worth doing!)

Obviously, all these items won’t be applicable to every character; a fighter is unlikely to need a spell component pouch and a wizard is very unlikely to wear armour but I think you get the drift.

If you enforce this kind of verisimilitude in your games (in that the PCs are not fully equipped in urban areas and suchlike) you need to keep this in mind when designing combat encounters. Many PCs when under-equipped are considerably less capable than normal. Thus, it would be “unfair” to throw normal encounters at them; I’m not saying don’t do it—the campaign situation or setup might call for it—but I am suggesting you think carefully about such encounters first.

What do you think? Do you bother to track this kind of stuff or do you assume the party are clanking about town fully armed and equipped at all times?

Better yet, did I miss something? Should I add something to the above lists?

Let me know in the comments below.

19 Comments Share Tweet Print Email
Categories: Creighton, Gaming Advice, Player Advice
Disclosure of Material Connection: Some of the links in the post above are “affiliate links.” This means if you click on the link and purchase the item, I will receive an affiliate commission. Regardless, I only recommend products or services I use personally and believe will add value to my readers. I am disclosing this in accordance with the Federal Trade Commission’s 16 CFR, Part 255: “Guides Concerning the Use of Endorsements and Testimonials in Advertising.”

19 thoughts on “What’s in an Adventurer’s EDC?”