As well as knowing the rules, you’ve got to work together as a team to achieve a set goal. Sometimes, you end up playing with people you barely know so you don’t know how they’ll react in any given situation. Other times, you play with friends you know very well so you can predict how they’ll act. For example, if one of my friends is playing the cleric I know that unless it is suicide he’ll go to a fallen comrade’s aid. Another of my friends playing a cleric in the same situation probably wouldn’t.

I’ve also been thinking recently about how and why dungeon expeditions can go horribly wrong. It seems to me that when communication breaks down or when players don’t really have a clear vision of what they are trying to achieve things can go spectacularly and impressively wrong. (Or even worse, they plan and prepare for one objective and then wander off in search of another!) Of course, sometimes luck is just not on you side but other times adventuring parties seemingly do their very best to self-destruct!

“Skilled players always make a point of knowing what they are doing, i.e. they have an objective. They co-operate – particularly at lower-levels or at higher ones when they must face some particularly stiff challenge – in order to gain their ends. Superior players will not fight everything they meet, for they realise that wit is as good a weapon as the sword or the spell. When weakened by wounds, or nearly out of spells and vital equipment, a clever party will seek to leave the dungeons in order to rearm themselves. (He who runs away lives to fight another day.) When faced with a difficult situation, skilled players will not attempt endless variations on the same theme; when they find the method of problem solving fails to work, they begin to devise other solutions. Finally, good players will refrain from pointless arguments and needless harassment of the Dungeon Master when such bog the play of the game down into useless talking. Mistakes are possible, but they are better righted through reason and logic, usually at the finish of play for the day.”

Gary hits upon several of my gaming touchstones in this quote—organisation, cooperation and communication. He also, interestingly, breaks down skilled play into two distant sections:

I’ve thought for a long time players need to cooperate to win and that blindly hitting everything isn’t normally the best way forward. I hadn’t, however, factored the players’ actual behaviour into the mix. I’ll be looking more closely at my and my friends’ gaming styles in the near future—I wonder how many of us are truly skilled players?

Are you a skilled player? Do you disagree with Gary? Let me know, in the comments below. 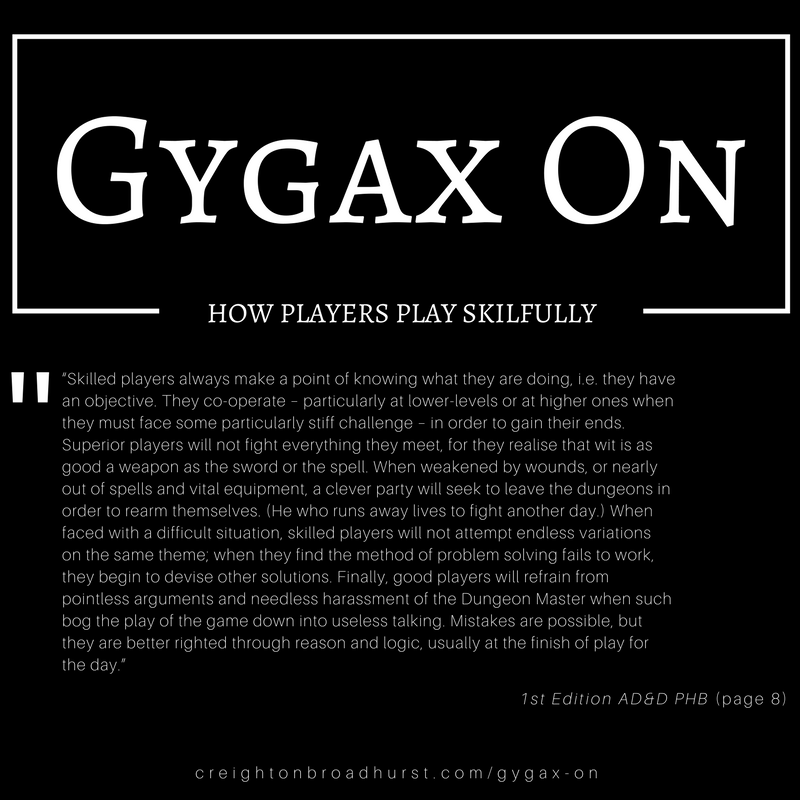 1 Comment Share Tweet Print Email
Categories: Gaming Advice, Gygax On..., Player Advice
Disclosure of Material Connection: Some of the links in the post above are “affiliate links.” This means if you click on the link and purchase the item, I will receive an affiliate commission. Regardless, I only recommend products or services I use personally and believe will add value to my readers. I am disclosing this in accordance with the Federal Trade Commission’s 16 CFR, Part 255: “Guides Concerning the Use of Endorsements and Testimonials in Advertising.”