At the end of last session, we left our heroes discussing their next course of action. The conversation went on long into the night. Many of the party favoured bribing Vesciwyr with the Grail of Ashenyar to learn for whom the dragon worked. Gorinar flatly refused to accept this course of action, and Krorz was very keen to kill the dragon so her loot could fall into the survivors’ hands.

Eventually, the party compromised on performing a thorough scout of the mesa the next day and the balance of their night passed uneventfully. The next day, they search the surrounding area comprehensively and found little of interest beyond a set of double wooden doors piercing the mesa at ground level on its western side. That night, Tzaran flew over the area in owl form and discovered a gigantic sinkhole atop the mesa. Easily 300 ft. across, it was so deep he could not make out its bottom. (Although, faint splashes suggested it was at least partially flooded.)

The next night, the party approached the double doors. Gorinar summoned a small earth elemental and sent it through the door to determine what lay beyond. It returned to report a passageway led away from the door. Two guards lingered in the passageway. Tzaran then used his magic to make a small hole in the door and Skink slipped inside to do a proper scout. He discovered a passageway leading deeper into the mesa guarded by two kobolds. Slipping passed them, he continued to a 10 ft. wide chasm splitting the passage. Planks of wood crossed the gap and so be snuck on into a huge chamber that obviously served as a common room for the kobold tribe. He counted at least 50 kobolds–including women and children–in the chamber.

Two passageways led away from the chamber. The first led to the guarded quarters of the tribe’s chief while the other led to a huge lake filling the sinkhole. Skink couldn’t make out the far side of the lake so vast was the lake and there was no sign of a dragon lair. However, a small raft was tied up on the lake’s shore and the party later theorised the kobolds used the raft to reach Vesicwyr’s lair. (They also later theorised that attacking the dragon that way would be suicide).

Undeterred by these challenges, the party attacked under cover of darkness. Skink and Ulmo snuck through the hole Tzaran had created in the door–the unobservant kobolds had not yet noticed it. Again, they snuck through unnoticed and Skink moved down the corridor to remove the planks from the chasm. He then attacked, but missed the kobold! As the rest of the party waited outside for the door to open, Skink and Ulmo fought the sentries. Sadly, although Ulmo killed one with magic missiles, they failed to kill the other one who promptly raised the alarm. Once Ulmo got the doors open, the rest of the party moved inside. By then, Skink had reached the chasm and the surviving kobold had leapt across it to join his fellows who were hastily erecting a barricade. 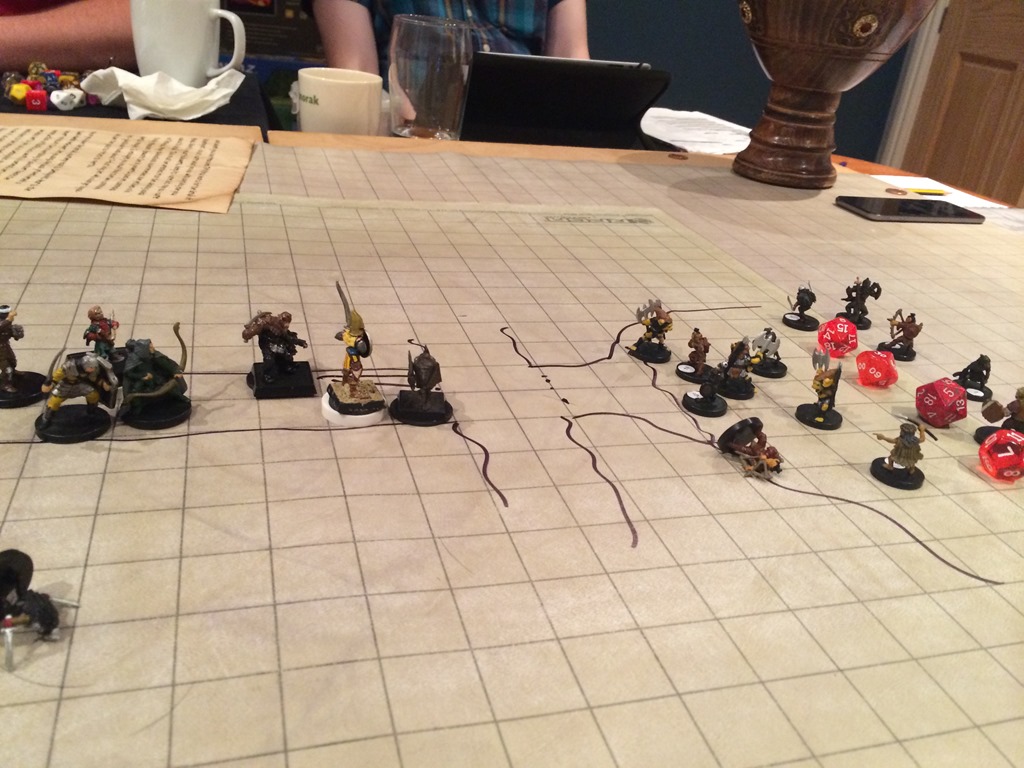 Krorz rushed forward and Ulmo unleashed several fireballs that slew over a score of the defenders. With their barricade destroyed and the party surging over the chasm using a stone ramp formed by Gorinar’s spells the surviving kobolds fell back.