In the cold, wan light of the pre-dawn a group of adventurers gathered on the docks. Well armed and equipped the group had hired a local sailor—Taneli Leino—to sail them across the bay and—crucially—await their return. 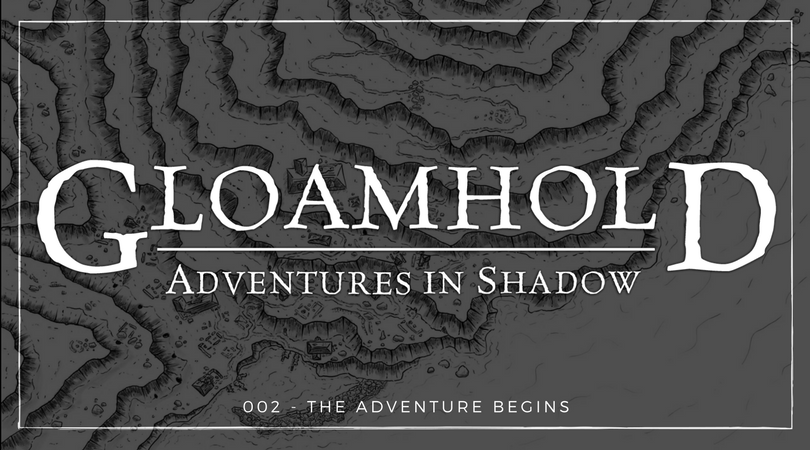 With the party was a man-at-arms, hired to keep Taneli safe, for he feared Greystone’s ruins. The place had a fell reputation of madness and slaughter and more than one fishing boat had disappeared behind its tumbled, slick-stoned breakwater never to return.

Rumours of something terrible living in the accursed waters beyond Greystone’s breakwater meant Taneli would not even enter the harbour briefly. Instead, he got as close to the breakwater as possible and the party had to scramble up its slick, seaweed-wreathed stones. Goldogrim was the first up the tumbled stones, picking a way through the rubble and slime for his less dextrous companions. As he climbed, Thangrim—a keen cook—prised off one of the large barnacles festooning the rocks with an eye to perhaps supplementing the party’s rations. However, the barnacle emitted a strange smell—as if it was already mouldering—and the dwarf cast it away; it was clearly not fit to eat.

Beyond the harbour lay Greystone’s tumbled ruins. In the Mottled Spire’s shadow, it was a chill, dismal place. Looking down at the harbour, Goldogrin noticed the splintered remains of a fishing boat were yet moored to one crumbled dock. It seemed in surprisingly good condition, except for the fact it was half sunk—perhaps something large (and hungry) did indeed lurk in the harbour’s black, uninviting waters.

As the party took in the scene, they noted several buildings yet stood among the rubble and ruin. Several clustered near the harbour while another—the grandest, a ruined manor—stood in stark glory upon a seemingly inaccessible ledge high above the village proper. Several cave mouths were visible in the cliffs and Tolirayth remarked that he recalled the villagers had used the caves as homes, working and linking them together so they may move about safely even in the depths of the most savage winter storm.

Moving cautiously along the breakwater, the adventurers quickly came to the first building. Only its walls yet stood proud, but carvings above what remained of the main entrance indicated this was probably once a church of Conn (LN god of community, family and rulership).

A sickly bush grew in the entrance, but the party pushed by it and entered the ruin. Within, all was rubble and decay. Nothing seemed immediately interesting, but the party spent the best part of half an hour poking about the ruin. Glourn discovered the wrappers of several iron rations caught on a rock in one corner—suggesting that someone had been here relatively recently—while Thangrim and Auric discovered what looked like the top of an archway “hidden” behind a high pile of rubble, Intrigued, the party spent more time clearing away some of the stones so they could see what lay beyond.

Crawling forward over the now lower rubble pile, Goldgrin confirmed a tunnel sloped downwards beyond the rubble. After a short discussion, the heroes decided to investigate the rest of the above ground ruins before descending to explore the tunnel. In case anything should seek to escape from the passage, they carefully piled up some stones so that anything breaking out would make considerable noise.

Before pushing on to the next ruin, Thangrim scattered some rations on the ground outside the temple. Attracted by the food, several large gulls of evil aspect swooped down to feast and the party killed a half-dozen or so before the rest took wing. Cunningly, Thangrim then tied the dead birds together with a length of creeper and hurled the bloody corpses into the harbour—in an attempt to see what might lurk in its watery depths. After a few moments, the blood in the water had the desired effect: something large moved beneath the water, but sadly the party did not catch of a glimpse of it as the bloody bundle of corpses sunk from view.

Undettered, the adventurers pushed on toward the next ruin, that stood perilously close to the harbour. Bravely, Goldogrin crept forward to discover this was another temple—this time dedicated to Serat, Mistress of Storms (CN goddess of the sea, storms and voyages). Although, the temple was similarly ruined, it was in better condition than Conn’s hall.

A ceremonial pool had been cut in the rock on the side of the temple closest to the sea. The tang of salt and smell of the sea was powerful within and Goldogrin discovered a set of steps festooned with sickly yellow and green hued seaweed and slime leading down into the water. A passage, cut into one of the pool’s walls, clearly led to the sea. As he pondered the pool, Thangrim followed the scout into the shrine and asked loudly what he had found. As Goldogrin turned to answer he caught a glimpse of the seaweed festooning the steps starting to move and twitch. Several long, slender fronds began to quest up the steps toward him. It was lucky he had seen the fronds begin to move as he was able to dash back out of the way before the fronds reached him. Both adventurers retreated from the shrine to tell their fellows what they had discovered.

After a brief discussion, the party decided to leave the shrine for the moment. No-one seemed to know what the living seaweed might be and none seemed too keen to tangle with it.

But one large, relatively intact building remained in the immediate vicinity and it was to this the party advanced. It transpired, the building was little more than an elaborate facade for a cave, which sloped steeply downwards before levelling off into a large area. Strangely, soot caked the ceiling. Cautious investigations revealed the cave beyond to be a forge and living quarters. The whole area had been comprehensively looted, but several skeletons—all bearing the marks of violent death—lay scattered about. Behind the forge, a stout oak and iron banded door yet remained intact…and shut.

While most of the party searched the area, Veronwë and Tolirayth kept an eye on the village ruins. Several times, Tolirayth caught glimpses of light reflecting off metal—as if from spear points or armour—from high up on one ledge. It seemed the party’s arrival had not gone unnoticed.

Finding nothing else of value or interest, the party decided to investigate the door but it was firmly shut. Not locked, it had nevertheless swollen to fill its stone frame. Several of the heroes tried to open it, but it was only when Thangrim help Auric that the door was forced open.

The party were in for a shock. As they pulled the door open, foul air redolent with the stench of decay and filth bellowed forth. A short corridor lay beyond and as Auric shouted a warning three emaciated, pale skinned humanoid with long claw-like nails and a look of implacable hunger rushed toward the adventurers—no doubt alerted by their repeated efforts to open the door. As Dulannis and Auric moved to block the creatures’ path, Glourn hurled his weight against the door slamming it shut, trapping the creatures—ghouls the adventurers supposed—on the other side…

6 Comments Share Tweet Print Email
Categories: Adventures in Shadow, Gloamhold
Disclosure of Material Connection: Some of the links in the post above are “affiliate links.” This means if you click on the link and purchase the item, I will receive an affiliate commission. Regardless, I only recommend products or services I use personally and believe will add value to my readers. I am disclosing this in accordance with the Federal Trade Commission’s 16 CFR, Part 255: “Guides Concerning the Use of Endorsements and Testimonials in Advertising.”

6 thoughts on “Adventures in Shadow #002: The Adventure Begins”