At the end of last session, we left our heroes investigating a partially sunken chamber. Unfortunately, Narfu had just knocked a bucket of dead bats into the water.

After a few moments, three huge spiders burst forth from the water, in search of fresh food. Narfu, trapped on the slippery ledge away from his friends had a few terrifying moments as two of the spiders went for him repeatedly. 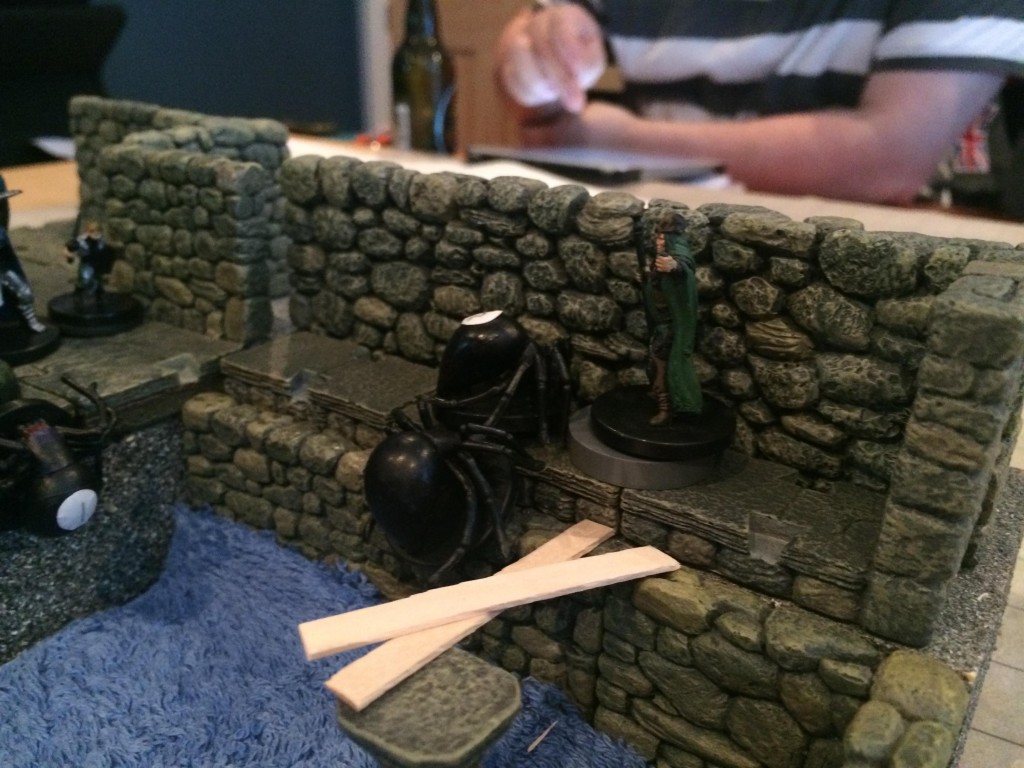 However, the dextrous monk made good his escape by sliding under one spider and leaping passed another on the way back to his friends. With the group reunited, the spiders were quickly despatched without serious injury to the adventurers. 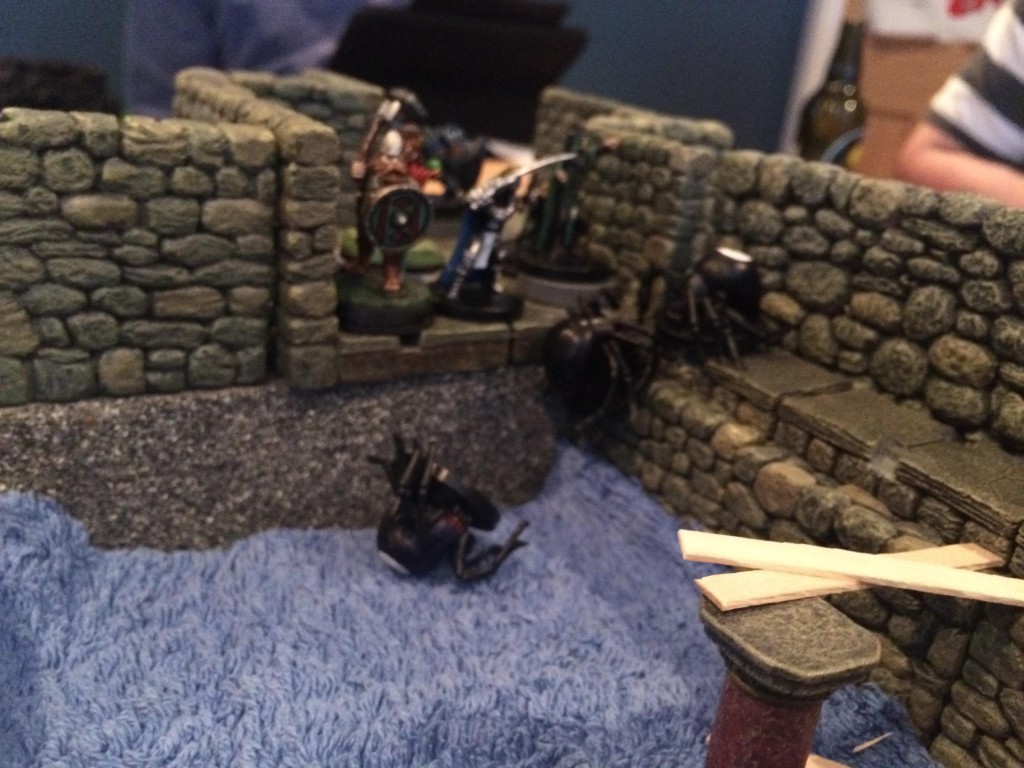 Investigating the water with several lengths of twine and a heavy stone, the party discovered the water in the chamber was approximately 50 ft. deep, and therefore decided to return the way they came.

Returning to the chamber in which they fought the ooze, they continued down the only unexplored passageway and discovered a chamber filled with guano…and bats. The party’s lights disturbed the bats, which promptly attacked. Things looked grim for a while until Nylond destroyed the swarm with a scroll of sound burst.

The chamber held little of interest. At this point any sane group of adventurers—low on healing, spells and consumables—would have rested or retreated, but the party—certain their goal lay closely—pushed on.

Heading down the stairs to the room holding the huge solider ants, they readied for battle. First Grooble tried his innate ability to speak with animals, but it seemingly had no affect on the ant. Predictably, combat ensured, and although the party was victorious, their resources shrank yet further.

Still, undeterred, they pushed on, exploring the only proper-sized corridor leading away from the chamber. Around a corner, they discovered a small chamber and stairs leading down again. The small chamber also held a terribly-made secret door. Inexplicably, Nylond started to bash it down with his morningstar, seemingly not caring for the consequences of alerting every creature in the dungeon to the party’s presence.

Shockingly, the sound this made alerted everything in the nearby chambers to the party’s presence and battle was joined! Nylond destroyed the door to reveal a narrow corridor leading into a chamber, which housed the biggest spider the party had ever seen. In moments, it was on the party and pushed Nylond back into the chamber. 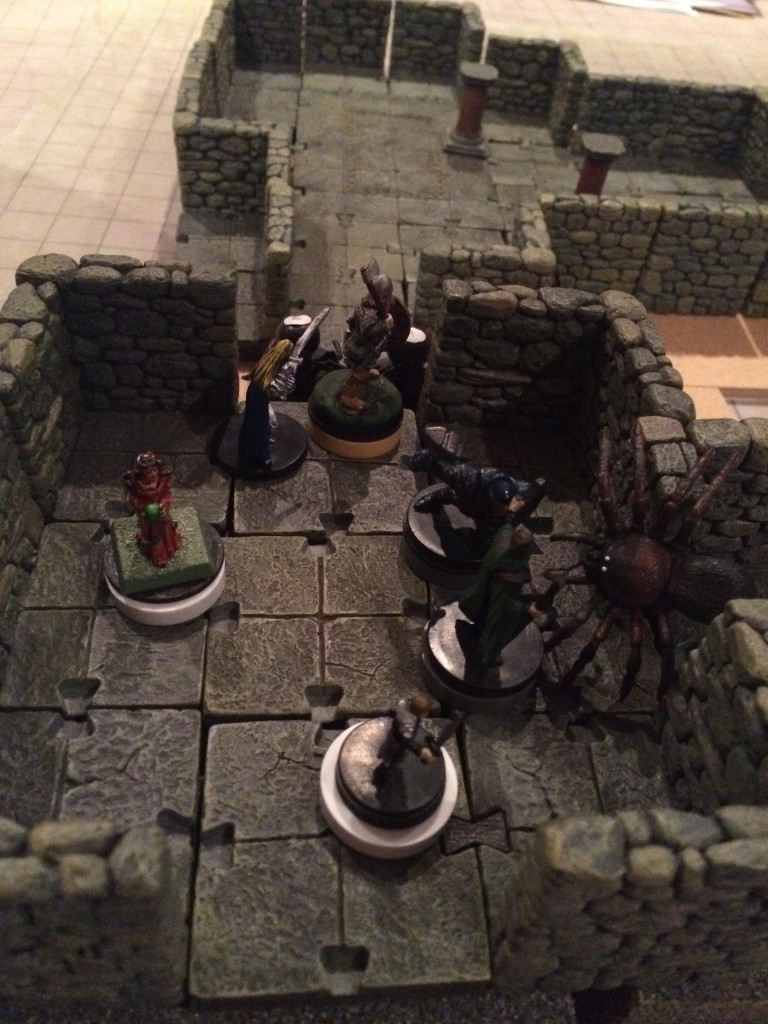 Worse yet, two more spiders—not as big as the first, but still the size of ponies—scuttled up the stairs and the party was suddenly fighting on two fronts. Behind the spiders came a veritable tidal wave of small, blue dwarves.

The small dwarves hurled volleys of darts at the party while the spiders attacked the two paladins who bravely stood to the front. Shortly, though, matters grew grim. Both paladins were down in their own blood, struck down by the gigantic spider. With the rest of the party pushed back, the paladins looked doomed. While their wounds were stabilised, the party could do nothing to stop the dwarves slowly dragging away their comrades to some unspeakable, unnamable fate.

As things seemed at their worst, things got worse. more dwarves came round behind the party and hurled volleys of darts at Grooble and Kara, who had thus far remained relatively safe. Kara was slightly injured, but her magical protections deflected most of the attacks. 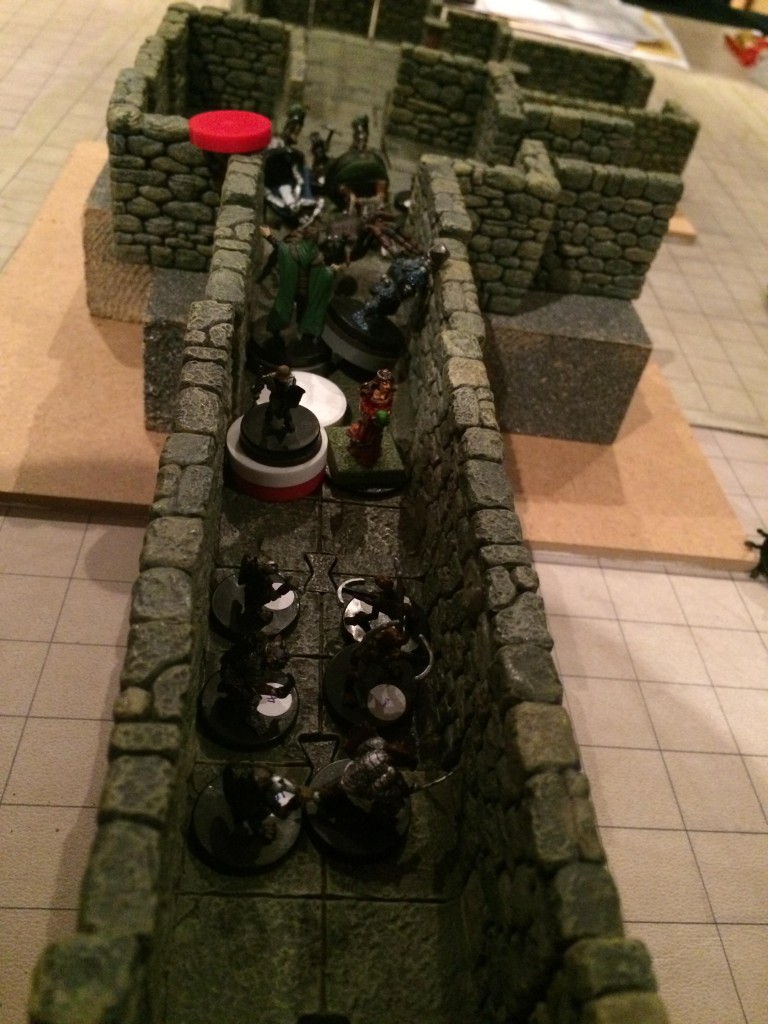 Now, the party was surrounded in the corridor with no wary out. As the battle raged on, finally Narfu landed a solid punch on the gigantic spider and slew the beast. With its lesser brethren already dead, the party now only had to contend with a dozen or more dwarves. Nylon used his last scroll of sound burst to stun many of the dwarves behind the party, but as the fight dragged on the party’s fate stood on a knife’s edge…