At the end of last session, we left our heroes standing over the bloodied, broken bodies of their enemies. However, our heroes were now grievously low on resources.

After looting the fallen, the party decided to retreat to rest and recuperate before continuing their explorations. Instead of returning to Marner, they elected to rest in the lowest level of the tower. Before doing so, they dismantled the wooden bridge they crafted to reach the platform leading to the crypts and stacked the wood nearby at the head of the stairs.

Much of the night passed uneventfully, until Narfu’s watch. The preternaturally aware monk heard squeezing on a nearby staircase and crept forward to investigate. When he reached the staircase, he spotted a large rat scurrying back up the stairs and gave chase. The rat led him further up into the tower, and away from his companions. Eventually, he caught up with the rat in one of the upper chambers full of pillars. Before his horrified eyes it transported into a rat/human hybrid and shot at him with a crossbow. Luckily, the shot missed and Narfu dodged back the way he came—keen to not tangle with the creature on his own!

Narfu briefed his comrades on what had occurred, but the rest of the night was uneventful.

The next morning, after making their preparations the party again climbed the stairs to the upper level. Reaching the top of the stairs, they discovered all their wood had been stolen! Rushing to the shaft room they discovered it had all been stacked neatly on the wooden platform. At this development, the party was less than thrilled. Narfu—the best climber in the group—was the least thrilled as he knew he’d be the one climbing over to the platform to retrieve it, and the trapdoor above the platform was open.

Approaching cautiously, though, Narfu spotted something moving in the shadows beyond the trapdoor. With little option, the party called out to whatever lurked above. It transpired, the Tower Girl’s leader—Ayala Javeski—was responsible for the stolen wood. She wanted to leave the tower, but demanded guarantees from the adventurers they would not hurt her. In particularly, she demanded the paladins swear by their divine patron they would let her go. With little choice, and the greater good of recovering the shard no doubt on their minds, the party agreed. Shortly thereafter Ayala emerged—laden down with treasure—and accompanied by a small horde of rats. She passed from the chamber and shortly thereafter was seen rowing away from the Crow in one of the rowboats moored below.

With this last barrier removed, the party rebuilt the wooden bridge and explored previously unexplored areas of the tower. They discovered signs of habitation, but little of interest in the upper level until they found stairs going down. These they followed, and discovered a chamber dominated by a huge set of doors clad in a silvery metal. The doors were hot and had Ancient Flan runes carved into them: one set spelled out “Listen” while the other said “The Eyes.” This development stymied the party for some time. Instead electing to search the other chambers nearby before dealing with the doors they discovered Ayala’s bed chamber, some treasure she’d left behind and a secret door in which lay a skeleton clad in a fine chain shirt and carrying some other treasures! With these chambers searched the party returned to the doors.

After a while, Aq theorised the runes had to be reorganised—like the box in Hiedmarch Manor—and so the party started testing various combinations. Unfortunately, the doors were so hot that moving the runes around caused damage to the person doing so but after only a few attempts, Aq hit on the correct changes—“Silent” and “The Eyes”—and the doors opened. Beyond lay a cobweb-choked passageways that led to more stairs going down.

Following these stairs took the party into a chamber with a pool full of foul water. Grooble decided to see how deep the water was, but in doing so he disturbed what lurked within! Two strange blob-like oozes emerged from the scum-covered water and attacked. One grabbed the unfortunate gnome, injuring him somewhat, but his friends quickly rushed to his aid and the creatures were swiftly defeated. 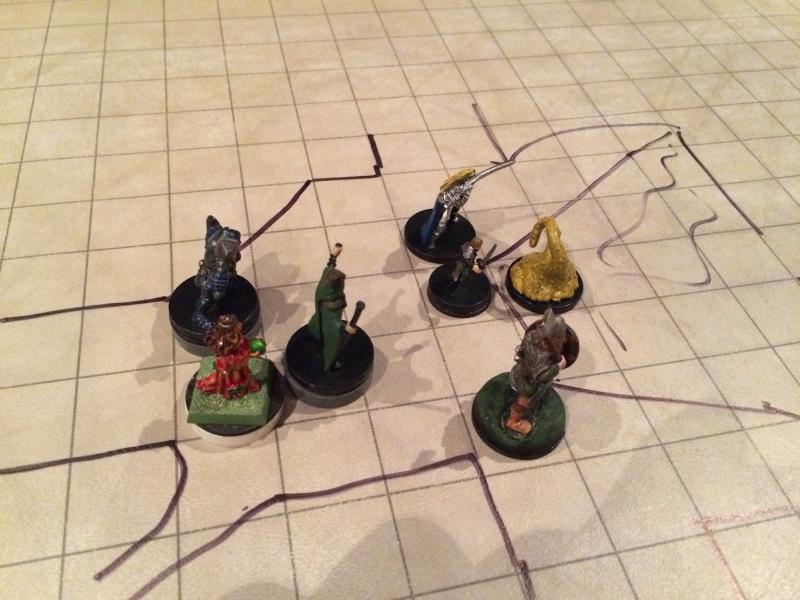 Rapid footsteps from a corridor to the right caused the party to immediately rush in that direction. Narfu and Nylond spotted a secret door roughly opposite a staircase down which the footsteps descended. Giving chase, they plunged downwards—now, undoubtably, they were under the tower itself! They came into a huge room filled with large piles of earth. A huge ant wandered the chamber, and quickly became aware of their presence. As they watched another ant appeared, and the party decided that perhaps it was best to check the secret door above before battling the ants!

Opening the door, the discovered a long chamber that ended in a ledge overlooking a saltwater pool. A narrow ledge ran along one wall and ended in a plank that itself led to a pillar jutting out of the water upon which rested a bucket. Narfu—inexplicably fascinated by the bucket—decided to investigate and carefully crossed the ledge. Reaching the end of the plank he noticed it was very sodden and instead of trusting his weight to it used it to knock the bucket over, which dumped some dead bats into the water…

2 thoughts on “Shattered Star #8: Passing Beyond the Doors”