At the end of last session, we left our heroes in dire straits…

As the battle raged on, the small blue dwarves grew more desperate to slay their foes. Three intercepted Narfu in the chamber, while the others surged passed him and into the corridor. One—perhaps slightly more intelligent (or vindictive) than its fellows—picked up Aq’s fallen axe and advanced on Nylond. 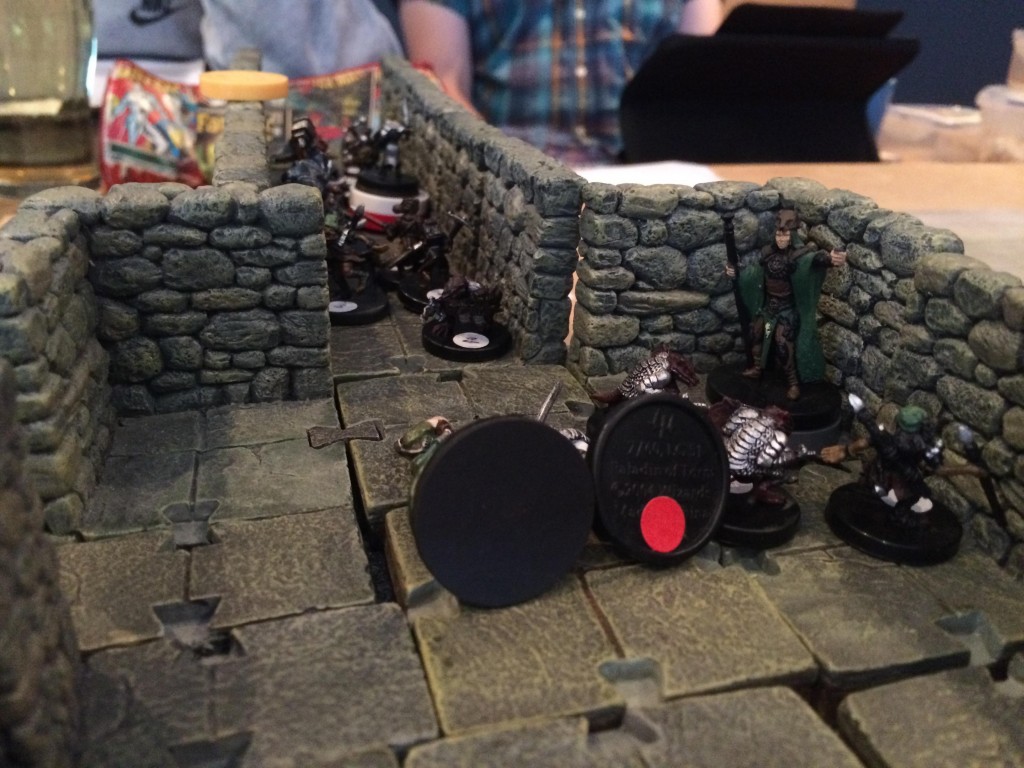 Fighting in the chamber, Narfu landed several solid hits on his enemies, but none did any damage—it seemed the creatures were resistant to normal attacks. At the other end of the chamber, Kara and Grooble were also in trouble. Although their foes were momentarily stunned by Nylond’s sound burst, the dwarves quickly returned to the fight.

Kara, using the power of the shard she carried, hurled an illusionary fireball into her enemies’ midst. Several fell—tricked into believing they were dead—but the others fought on and injured the plucky sorceress. 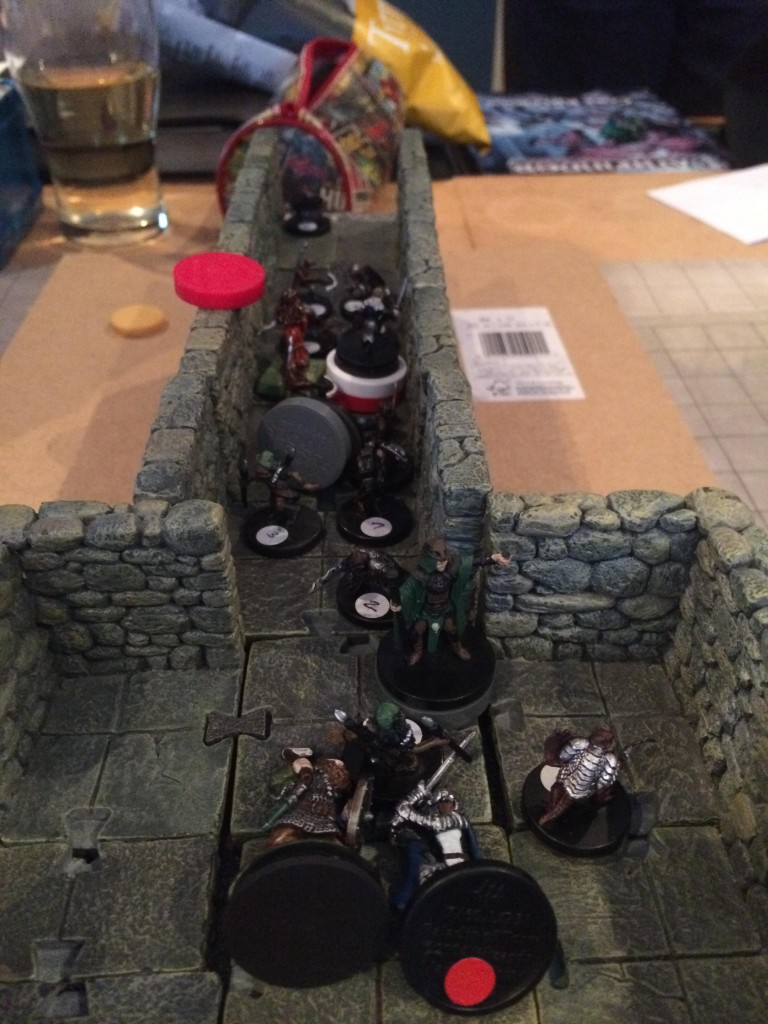 The party were swarmed. In short order, Kara fell leaving Grooble on his own to defend the rear. With no option now, the gnome dropped his tower shield, drew his heavy shield and laid about him with a morningstar. At the other end of the corridor, although Narfu had managed to escape his ring of attackers, he had failed to actually kill any of them. As he almost reached Nylond, the brave dwarf fell—Aq’s battle-axe (wielded by a very lucky attacker) buried in his skull. It was a mortal wound, but in the chaos of battle the surviving adventurers did not notice his death. By now several of the party’s foe were down, but the odds were still not stacked in the PCs’ favour.

Mere moments later, Grooble also fell leaving only Narfu still resisting the attackers. In desperation, he challenged his foe’s chief to single combat and, to his surprise, the chief agreed. The other attackers fell back, and the two met in the corridor. 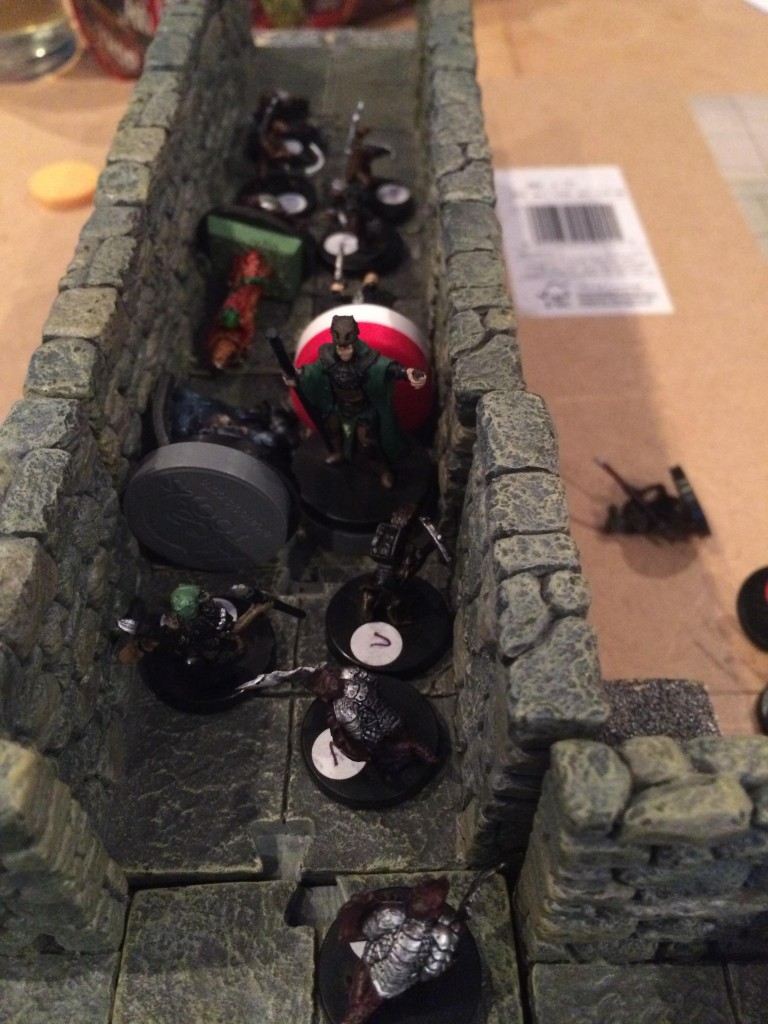 The two fought breast to breast in the corpse-strewn corridor. Narfu landed several strikes, but the chief had the same resistance to damage his companion possessed. Although Narfu was now slightly injured—and exhausted—eventually the monk triumphed over his opponent.

Seeing this, the bulk of the remaining blue dwarves wavered, now hesitant to continue the fight. One—the creature that had slain Nylond with Aq’s battle-axe—remained undaunted and the exhausted monk was once again forced into single combat. Even exhausted, though, Narfu’s skills saw him through and he quickly slew his attacker. Seeing this, the remaining dwarves fled and in a few moments Narfu stood alone among the slashed, battered and hacked bodies.

Acting swiftly, Narfu ripped a potion of healing from Tristham’s pack and fed it to Grooble. The magic within was sufficient to review the gnome who immediately used another potion on Nylond. However, the potion was ineffective and the heroes now discovered their companion was slain. Now, the party’s healing magic was completely exhausted. Yet deep in the dungeon, they had few options. Ever so slowly, the two conscious heroes dragged their injured companions toward the safety.

Hours later, the two exhausted heroes barricaded themselves (and their injured companions) into a secret room near the unopenable doors and rested. For two days they rested before feeling well enough to return to Marner and Hiedmarch Manor. This they did without further trouble, although they did discover their rowboat had mysteriously sprung a leak and were forced to bail vigorously!

Reaching shore, and with heavy hearts, the party returned the body of their fallen companion to the nearby dwarves temple, and then  rested for a week or so to both recover from their travails and to reflect on their experiences…

2 Comments Share Tweet Print Email
Category: Gaming Advice
Disclosure of Material Connection: Some of the links in the post above are “affiliate links.” This means if you click on the link and purchase the item, I will receive an affiliate commission. Regardless, I only recommend products or services I use personally and believe will add value to my readers. I am disclosing this in accordance with the Federal Trade Commission’s 16 CFR, Part 255: “Guides Concerning the Use of Endorsements and Testimonials in Advertising.”