At the end of last session, we left our heroes plotting their next move. They had returned Zainnis to life and now needed to get back to Ratik to continue their quest.

Thus, they took their leave of the librarians and returned to the dingy tavern they had first stayed in. In the ill-lit common room they searched for their guide, Gav, but he was nowhere to be seen. Instead, several of the party got talking to one of the famed troll augurs, Vargun. He was sitting alone at one of the tavern tables farthest from the fire.

From him, they learned the troll Augurs were on strike because Berkanin Ardoc family had kidnapped one of the trolls. Several of the party—Karelia, Thaladan, Narfu and Grooble—felt compelled to help. However, Cortana wanted nothing to do with the trolls while Zainnis—newly returned to life—seemed suddenly obsessed with buying a dinosaur.

Thus, the party briefly split up. Zainnis spent several hours searching for the city for a dinosaur for sale, but sadly failed to buy the object of his desires. He did, however, almost buy a small lizard and a “magic growing potion” from a street vendor who swore the lizard was a baby dinosaur. Unconvinced, though, the ranger finally decided against the purchase.

Meanwhile, the bulk of the party made their way through Dis and located Berkanin’s mansion, in which Augustille was being held. The mansion jutted out of Kaer Maga’s outer wall, and reaching it proved no more difficult than climbing a winding set of stairs. However, the occupants of the mansion seemed very unfriendly. Although battle did not break out, Berkanin’s harpy servitor did threaten the party. As she was an archer and Ziannis was absent, the party retreated to speak with other members of the Ardoc family in an attempt to free Augustille.

The Ardocs are famous and powerful golem crafters, and the party got nowhere with convincing them Berkanin should release Augustille, even though they made extensive protestations to other members of the family. Thus defeated, they returned to the inn to rest before leaving the city.

There they gave Vargun the bad news, which depressed the troll. He started drinking heavily, but after half an hour or so, he suffered a fit. His eyes rolled back into his head and he ripped his own intestines out of his body! In a strange voice he intoned the following cryptic prophecy: 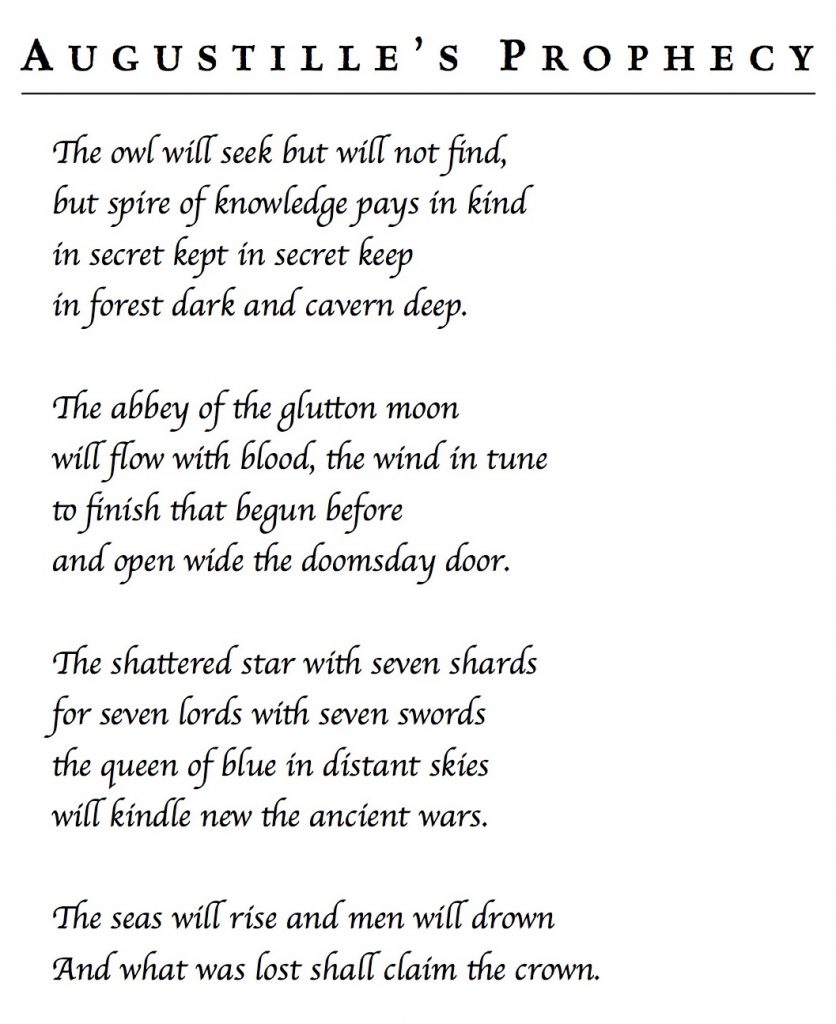 This greatly excited the party and they discussed its import. Its contents spurred Cortana to remember that just south of Windsong Abbey lay the town of Perin’s Bluff. The borderland town was reputed to have a very old shrine dedicated to Heironeous. Cortana wondered if here they might find more references to the Doomsday Door and why the faiths of Heironeous and Hextor watched over Windsong Abbey.

In the morning, the party set off for the Halflight Path and quickly secured the necessary tokens to traverse its length. Here they bumped into Abra Lopati and he offered to guide them down the path.

For several hours the party descended the path, until they rounded a corner to find a human child standing motionless in the middle of the passageway. Cortana—leading—recognised him as Gav, but something seemed wrong. As Cortana dismounted from his horse to speak with Gav, the boy staggered forward with a strange look on this face.

As he neared the party, he ripped a globe from a necklace around his neck and hurled it to the ground. There was a huge explosion, which was followed by several others as the necklace—clearly a necklace of fireballs—detonated spectacularly. Gav was slain, as was Cortana’s horse, and several of the party were badly burnt.

As the smoke cleared, the party moved forward. Karellia cast daylight to better see what was going on. Moments later, a creature of black shadow—a shadow demon—appeared in the corridor, but it immediately recoiled from the powerful light. It was joined by two other demons armed with longspears, and the fight was on!

The party swung into action. Thaladan engaged one of the creatures while Zainnis slew another. All was going well, until a huge vulture-like creature—a vrock—appeared amidst the party. It spoke words of lilting beauty that seemed blasphemous when uttered from its repulsive lips. Only Karelia could understand its speech: it had come for Grooble…

One thought on “Shattered Star #78: To the Halflight Path”