I’ve always been entranced by megadungeons. I remember pouring over Undermountain’s huge maps included in that first epic boxed set and longing to explore them. Castle Greyhawk—of course—held a fascination for me. It would have been so cool to play in Gary’s dungeon.

It should come as no surprise to you, then, I’ve always hankered after designing my own megadungeon. I think megadungeons are one of the hobby’s foundational cornerstones I dearly want to run a multi-year campaign in a megadungeon. (Hopefully, I’ll do just that after my Shattered Star campaign ends).

Almost 20 years ago, I took a stab at creating my first megadungeon when a local gaming shop approached me about running a living-style campaign in-store. Thus was born Deep Delve. At its height we had three GMs and almost forty players exploring the dungeon’s depths. Sadly, much of the dungeon is now lost to history but I did recently find some of the maps and managed to photograph them before they fell apart!

Then a decade or so ago I got to do some work on Castle Greyhawk itself for the Living Greyhawk campaign! Talk about epic! But still, it wasn’t really my megadungeon. After Living Greyhawk, of course, I launched Raging Swan Press and that ate up a lot of my time.

Eventually, though, I hit on a scheme. I would design a megadungeon “live” on my blog in bite-sized chunks. (Check out this page for first drafts of much of the Campaign Guide’s content). This way, I could build it piece by piece, indulge myself and I wouldn’t have the pressure of a defined deadline. I mean, how do you ever finish designing a megadungeon? (You don’t).

I’d also be designing my next campaign! It was a win, win, win! 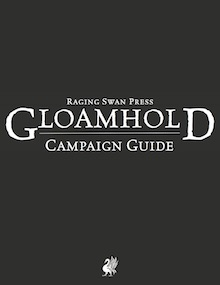 0 Comments Share Tweet Print Email
Category: Gloamhold
Disclosure of Material Connection: Some of the links in the post above are “affiliate links.” This means if you click on the link and purchase the item, I will receive an affiliate commission. Regardless, I only recommend products or services I use personally and believe will add value to my readers. I am disclosing this in accordance with the Federal Trade Commission’s 16 CFR, Part 255: “Guides Concerning the Use of Endorsements and Testimonials in Advertising.”