At the end of last session, we left our heroes deep below Carrion Hill. They had opened a barricaded door and been suddenly shrouded in magic darkness…

Three small humanoids—clutching daggers and with murder in their hearts—crept through the darkness. Most of the party could not see them, but Narfu (who was near the front and who had darkvision) called out a warning and battle was joined. Tristham and Aq were somewhat stymied by the magical darkness and the creatures swarmed about them stabbing and cutting. Narfu interposed himself between them, but was swiftly injured by one of the creature’s poisoned blade. As his strength deserted him, he was forced to retreat to seek magical healing from Grooble. 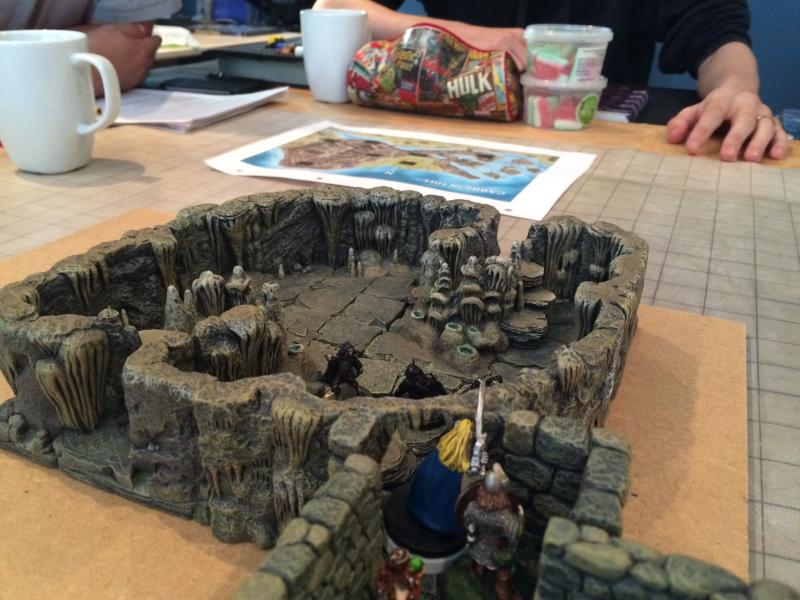 However, although the darkness hid the creatures they were no real match for the party and after a few minutes they were all slain.

After searching the room, the party continued onwards. The only way forward seemed to be down the other staircase leading out of the crypt. This the party took—Narfu cautiously in the lead. Progress was slow as Nok insisted on cleaning off the black slime from each step (in case they had to flee). After 20 minutes, the party had descended almost 400 feet down the stairs. Here the air grew steadily cooler and the brick and arched architecture gave way to worked natural stone.

At this development, progress halted as the party held a hurried conclave upon the lightless stair. Several party members were concerned the stairs would take them straight into the Underdark and that although they were coated in the black slime seemingly excreted by the mysterious creature there was nothing to gain by continuing downwards.

Thus it was decided they would return to the rain-lashed streets above to try and learn more about the creature’s intent.

Almost immediately drenched by the hard, incessant rain the party set about exploring the attack sites, but learnt little of value for there seemed nothing to connect the various sites. However, Grooble wondered if the local industry of middenstone could have any connection with the attacks and so the party headed off to the largest producer of middenstone—Rupman’s Vats—to test the theory.

Once they’d tramped though the empty, almost abandoned, streets, they discovered the building’s doors securely locked. However, smoke still belched from the building’s chimneys—clearly someone was inside. Undeterred, Narfu picked the front door’s lock (eventually) and the party snuck inside.

Fumes from the various vats hung thickly in the air, but at the other end of the building several men worked seemingly undeterred by the noxious fumes. Several of the party immediately suspected something was up and Narfu, Tristram, Aq and Zainnis crept forward. Aq detected evil and discovered the men were indeed evil! With no more justification needed they attacked!

Grooble used his divine power to ascertain the men were hurt by positive energy and although they seemed like normal humans everyone assumed they were undead. The battle was going rather well for the party until a hooded man stuck his head through a curtain at the other end of the room.

Seeing intruders, he screamed for them to get out and then attacked—bringing powerful magic to play against them. A sizzling black bolt of energy—an enervation spell—almost killed Aq outright and as the heroic paladin advanced undeterred a field of black tentacles suddenly surrounded him (and Tristham who had rushed to his friend’s aid). Now both were trapped and things seemed grim. As the rest of the party battled to win passed the spellcaster’s guards it seemed quite possible the paladins would soon meet their doom… 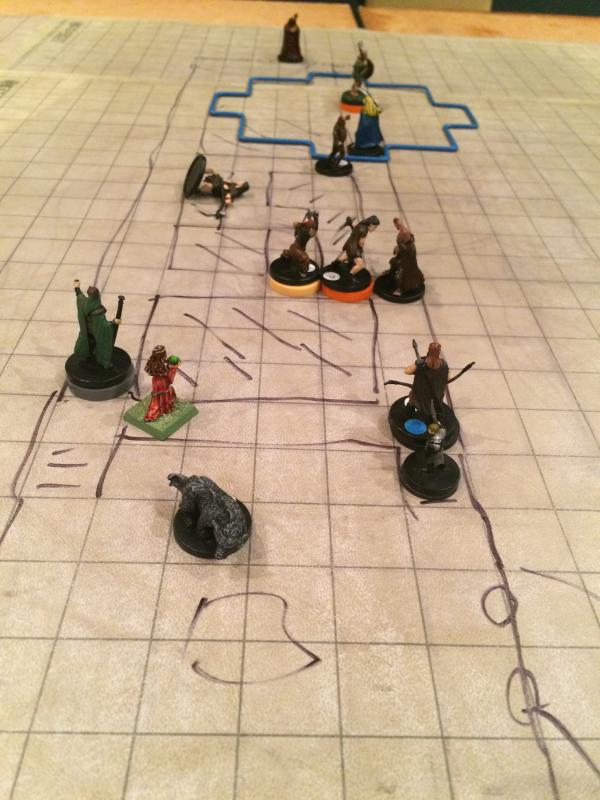