At the end of last session, we left our heroes about to burst through a door, behind which they’d heard the furtive movement of dungeon denizens.

This they did, Narfu heaving open the door. Beyond lay a long, thin room. Along the walls stood many cages. Most held nothing but bones, but a few had obviously been forced open from the inside— and their occupants yet lurked in the room. Foul aberrations seemingly the results of strange, aberrant experiments the creatures’ bodies comprised pieces of many other creatures. 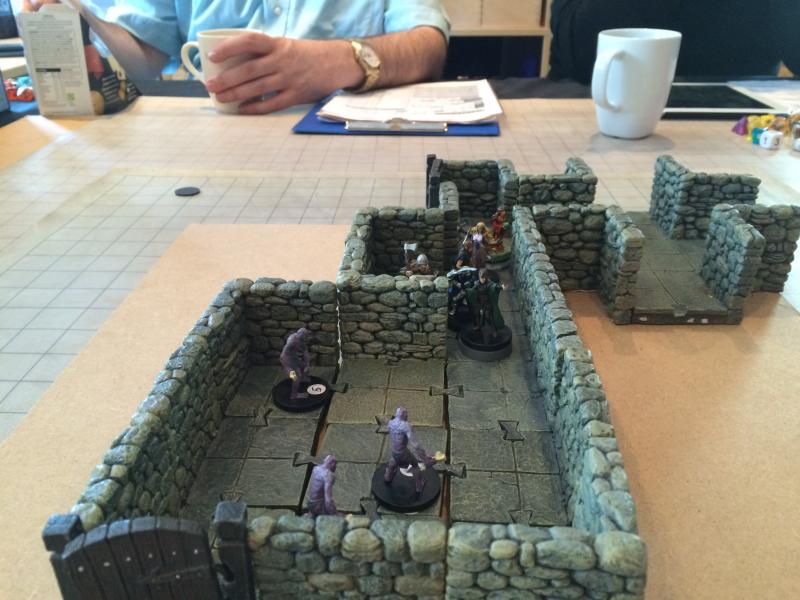 Clearly, these foul blasphemies had to be destroyed and the group—lead by a wave of vengeful paladins—burst into the room. Although loathsome to look upon, and obviously steeped in evil, the creatures were no match for the party and were quickly cut down.

One other door lead away from the room and this opened into a small chamber. The chamber was empty except for a scorched and blackened figure clad in rusty half-plate slumped over the windlass for a portcullis. The portcullis blocked another passageway leading away. A cautious search of the room revealed no traps but Narfu discovered the iron portcullis was also scorched and burnt. Beyond, the sound of growing and howling—akin to that heard earlier in the Rift Syphon—deterred the party from further progress in that direction.

Instead, they backtracked and exploring some previously unexplored passages and eventually discovered a sunken chamber. A wide, slippery stair led down into the water filling much of the room and an identical set of stairs rose out of the water at the other end. On either side, thick pillars decorated with carvings of writhing tentacles emerged from the water. 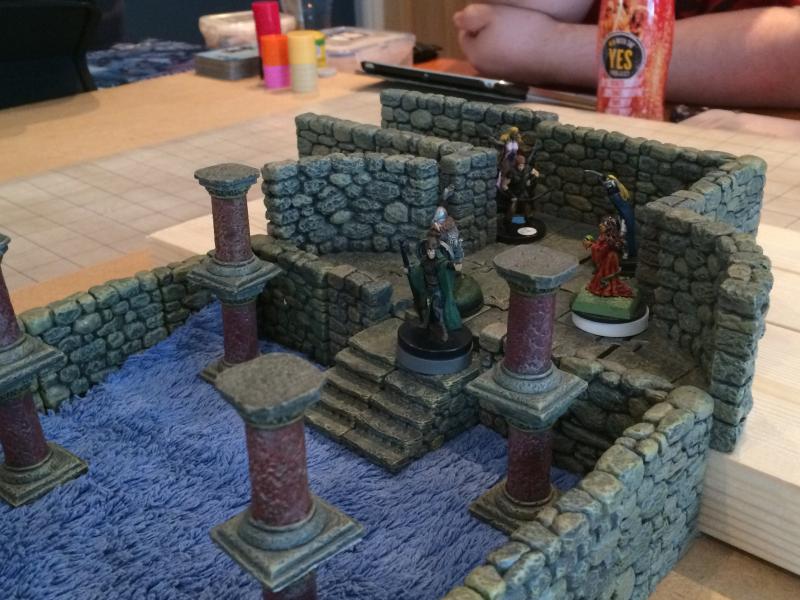 This discovery dismayed the party—particularly when Kara ascertained through communing with the shard she carried that the object of their quest likely lay beyond the water. Many of the group favoured turning back and trying to find a way around this room as they did not like the look of the fetid, murky water. However, in the midst of discussions, Quenelle declared that, “It’s only water—it’s not going to kill you” and jumped into the water!

As the party looked on, she started swimming to the other set of stairs. Disaster struck when she got halfway across. Suddenly, the water around her turned red with blood as unseen aquatic creatures bit and tore at her legs. 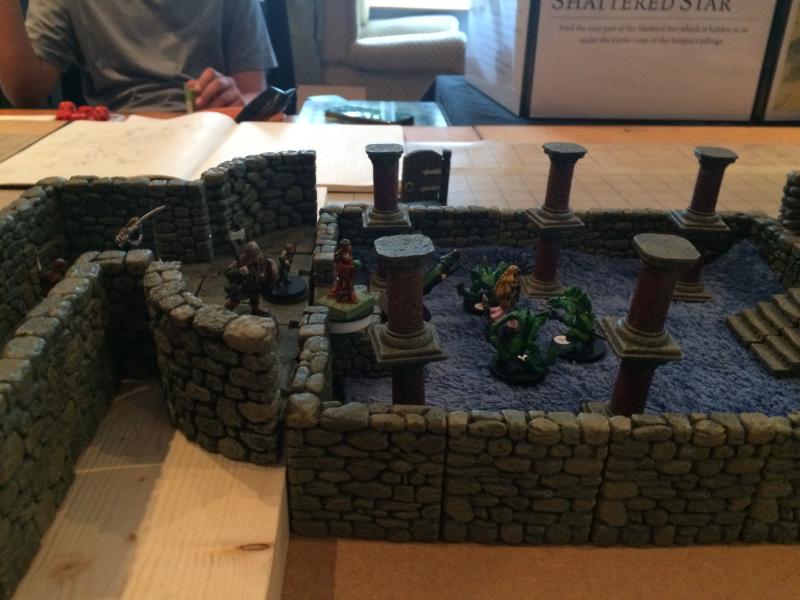 Quenell screamed and tried to turn back, but the creatures were clearly well suited for fighting in the water. Miraculously, she reached the steps but as she was on the very verge of escape, one of the creatures grabbed her and pulled her back into the water. Meanwhile, Aq and Grooble descended the stairs to aid their beleaugered comrade. While doing so, Aq was slightly injured and Grooble used much of his healing magic before scampering back up the stairs. Then brave Narfu struck! The monk hurled himself into the water in a brave attempt to divert attention from his bardic companion.

By now, Quenell had been rendered unconscious, but luckily her heavy pack twisted her around so her mouth was out of the water. Nevertheless while some of the creatures fought Narfu and Aq another attacker slowly dragged the bard further away from her companions.

Now, Grooble had expended all his healing magic and only Narfu remained in the pool—the rest of the adventurers unable to render much aid (if any) because the creatures stayed underwater. Eventually, Quennell’s body was dragged into a shadow-fileld far corner of the room and pulled underwater. Seeing this, Narfu—now injured—scrambled up the nearest steps, but this left the heroic monk cut off from his companions at the other end of the room. Luckily, none of the creatures followed the monk up the steps, but nevertheless the party now had a problem. 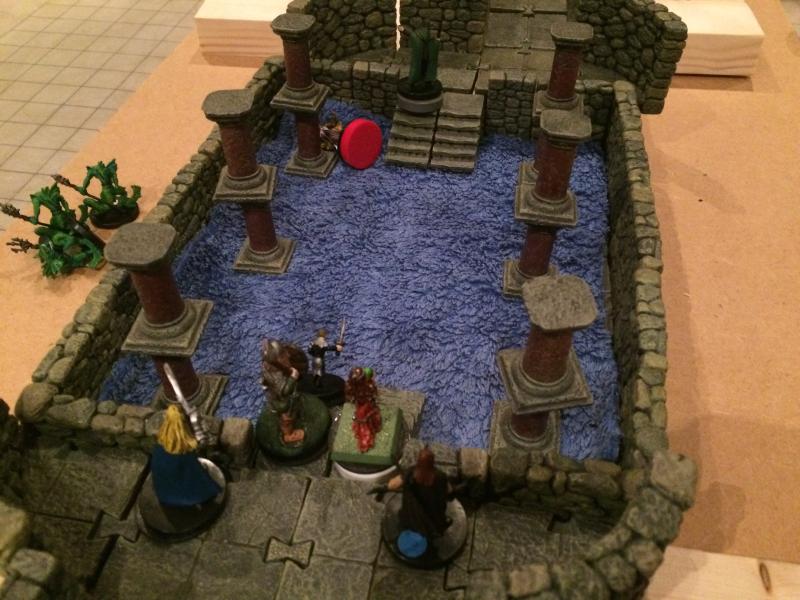 Several plans were considered. First it was thought Narfu could attempt to find his own way out down the only other passageway leading out of the room, but this plan immediately failed when it was discovered the passageway sloped downwards as far as the monk’s darkvision would reveal. The party considered backtracking and trying to find a way around to reach the monk, but this also seemed doomed to failure.

Eventually, Narfu decided to jump as far across the pool as possible and then swim as fast as he could back to his companions. Before he did so, his companions threw him a rope which he tied around himself. With all preparations made, he leapt into pool—getting about halfway across. As he struck the water and started swimming as fast as he could, the water at the rear of the pool became disturbed as the lurking creatures again moved to attack. With a mighty heave both Aq and Tristram tugged on the rope and pulled their companion to bottom of the steps. As the creatures bit and tore at the monk he staggered from the water knocking both Kara and Aq over.

Although they were now safe—the creatures seemed reluctant to leave the pool—now the party had a problem. Although one of them was presumably dead, they still needed to cross the sunken room—something that none of them particularly relished trying…

3 Comments Share Tweet Print Email
Categories: Borderland of Adventure, Pathfinder, Shattered Star
Disclosure of Material Connection: Some of the links in the post above are “affiliate links.” This means if you click on the link and purchase the item, I will receive an affiliate commission. Regardless, I only recommend products or services I use personally and believe will add value to my readers. I am disclosing this in accordance with the Federal Trade Commission’s 16 CFR, Part 255: “Guides Concerning the Use of Endorsements and Testimonials in Advertising.”