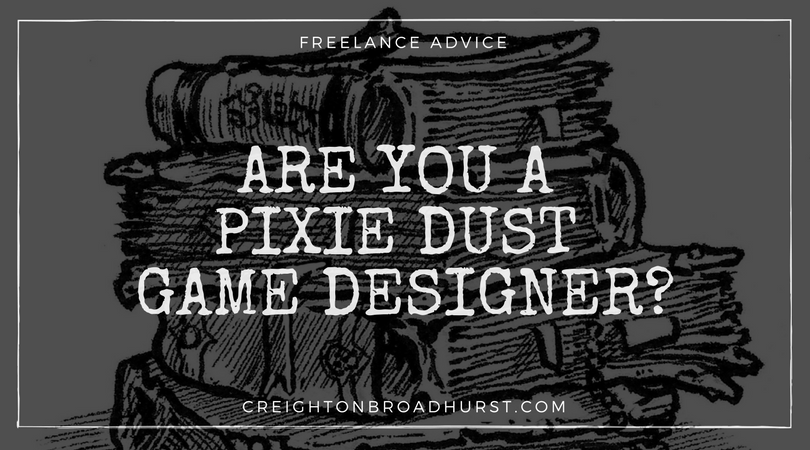 Pixie dust designers don’t need the Golden Rules of Freelance Game Design or the Golden Rules of Project Management. In fact, they are so amazing and talented it is impossible for them to kill their career. The only problem is that pixie dust designers are somewhat of a rarity. In fact, I’d go so far as to say they don’t really exist. It’s easy to look at a designer’s body of work and only see the result. It’s much harder to look at their material and see all the hard work and effort that goes into its creation.

Successful designers realise the importance of getting it right the first time. They live by the mantra, “If it’s worth doing, it’s worth doing properly.” They take the time to get it right. They treat their freelance works as a proper job, and not a hobby.

In short, a successful game designer does not rely on pixie dust.

Do you have any more suggestions to help fellow freelancers succeed? Why not share them in the comments below and help fellow designers do a better job today!

0 Comments Share Tweet Print Email
Categories: Freelance Advice, Gaming Advice
Disclosure of Material Connection: Some of the links in the post above are “affiliate links.” This means if you click on the link and purchase the item, I will receive an affiliate commission. Regardless, I only recommend products or services I use personally and believe will add value to my readers. I am disclosing this in accordance with the Federal Trade Commission’s 16 CFR, Part 255: “Guides Concerning the Use of Endorsements and Testimonials in Advertising.”