At the end of last session, we left the party discussing what to do next. Some wanted to rescue the prisoners held in the leader’s prison while others wanted to track down the dragon Vesicwyr in her lair and slay her. Eventually, the party decided to slay the dragon priest Sost. Before that, however, they decided to visit Janal and find out why Sost wanted her dead.

Returning to her shop the next morning, the party discovered it abandoned. Breaking in (subtly) they searched the place and found no signs of violence, but did recover a scroll left on the shop counter. Addressed to Tzaran, it said: 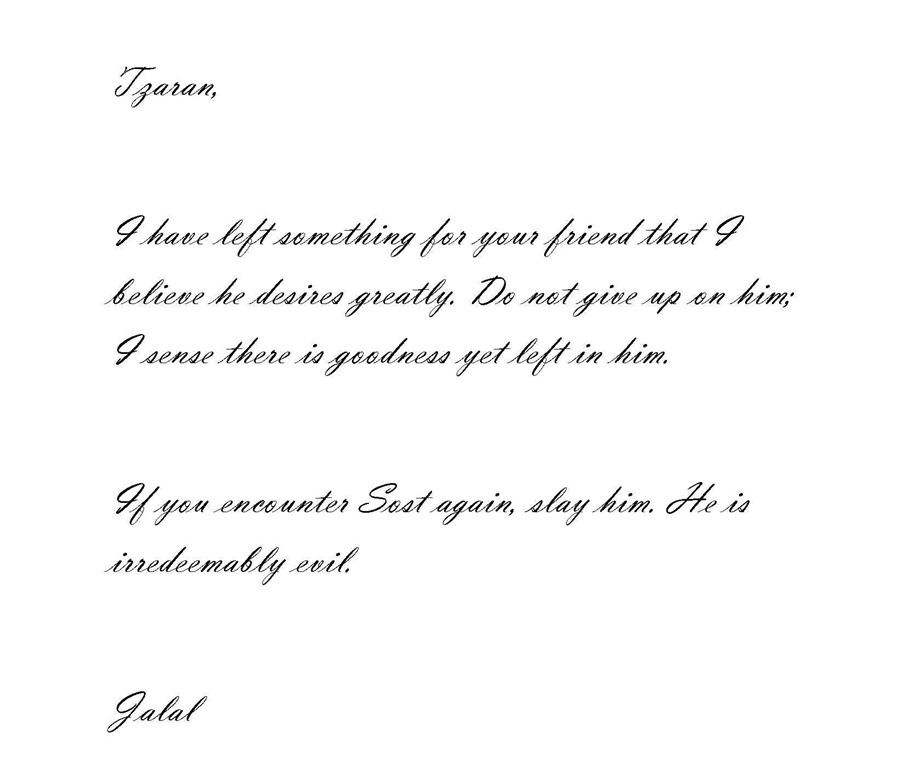 Along with the message was a scroll of restoration, which Gorinar immediately used to return Krorz to peak fighting fitness. Thus bolstered, the party decided to assault the temple of the dragon. However, the temple was located in the leader’s quarter which was off-limits to the majority of the populace. Thus, they hatched a cunning plan!

Using a bridge that crossing the river dividing the leader’s quarter from the rest of the town, they tried to bluff their way past the ogre guards watching the bridge. While the ogres seemed happy to let Krorz passed–Sost had apparently commanded he should be allowed admittance–the ogres would not let his companions enter. Just as things seemed at an impasse Ulmo, the redoubtable halfling sorcerer, stepped forward, and threatened the ogres with a series of terrible dooms if they did not stand aide. Cowed by the halfling’s obvious awesome power, the ogre agreed to let them all enter if it escorted them to the temple.

The party agreed and so they reached with temple without further incidences. They gained admittance to the temple and awaited Sost in the main chamber. When he arrived, summoned by one of his guards, the party pounced. Initially, they caught the priest by surprise but he quickly recovered. As his guards moved to defend him he stepped back onto a raised dais and commanded a huge dragon statue to slay the intruders. Moments later, as the statue lumbered forward, magical flames surrounded the dais providing Sost with a modicum of safety.

In the temple proper, the battle raged. The dragon statue remorselessly moved toward the party repeatedly trampling several of them underfoot. While Krorz battled a guard, the other fought with Klar. As the fighting continued, Skink snuck closer to the wall of fire and leaped through! Badly burnt, he nevertheless survived and managed to gravely wound the already injured Sost.

In the main chamber, things were not going as well. Klar was down, trampled by the dragon statue and several other members of the party were badly injured. Gorinar and Tzaran took advantage of the dragon statue’s distraction as it tried to find and crush the elusive Ulmo who made good use of the church’s wooden pews and invisibility to avoid its attacks. Sadly as the party regrouped, one of the temple guards–temporarily free of distractions–slew Klar as he lay undefended on the ground. Shortly thereafter, however, Gerard destroyed the statue with two well-placed adamantine arrows.

At that moment Sost and his surviving guard retreated to the upper level of the temple. Sensing victory, but low on powerful healing, the party followed. The guard was quickly despatched and although Sost managed to knock unconscious Ulmo, Krorz and Skink with his necrotic energies he was eventually slain by magic missiles hurled by the newly healed Ulmo. With their enemy dead, the party took a moment to gather themselves and plan their next move…