Most adventurers are young striplings, fresh out of adolescence. Hell, depending on your game system or edition, half-orcs can take up an adventurer’s life at the tender age of fifteen! 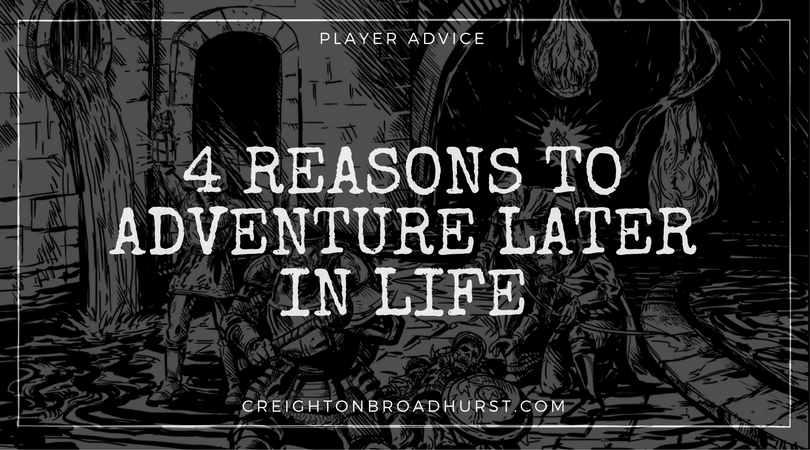 While many adventurers are no doubt young (and annoyingly healthy), there is a place in many parties for older adventurers. I don’t mean by this, an elf or a dwarf. While they have lived decades or perhaps even centuries, they are still young.

Rather, sometimes a player might get a hankering to play an older character–a grizzled man-at-arms or aged wizard, for example. While such a character could have any of the typical reasons for adventuring he or she might have other reasons for taking up an adventurer’s mantle later in life.

Here is a selection of such reasons. This by no means a comprehensive list; feel free to post your additions in the comments below.

I’m Fighting For My Family

The character’s family is in terrible danger. This danger could come from rampaging orcs, a sinister local lord hellbent on persecuting them or some other source. Alternatively, the family could be destitute for some reasons (perhaps the sinister local lord has raised taxes to intolerable levels or the local economy has collapsed) and adventuring is the best way the character has of providing for them.

Sometimes a young adventurer embraces the adventuring lifestyle because the seeks revenge against the person who slew his mother or father. An older character could also out for revenge after his family has been ripped apart, but in this instance it might be a wife, husband or child that has been slain.

Alternatively, the character’s relative(s) could still be alive, but have been taken by slavers, imprisoned by a local lord as hostages and so on and the character works to free them.

My Wife/Husband/Child is a Hostage

In this scenario, someone has imprisoned one or more of the character’s family and is using them to force the character to complete some task. The character—left with no real choice—adventures to complete the task or perhaps to gain the means to rescue his family.

I’m Having a Mid-Life Crisis

Having reached middle-age, the character has realised he is bored of his safe, “normal” life and craves a life of adventure, daring and glory. The character has left his family—perhaps with their blessing or perhaps without their blessing—and sets out into the world to experience all it has to offer. Such characters are perhaps even more carefree and hedonistic than normal adventurers.

Got Any Other Reasons?

So that’s four reasons why a character could take up an adventurer’s mantle late in life. Did I miss any? Let me know, in the comments below.

11 Comments Share Tweet Print Email
Categories: Gaming Advice, Player Advice
Disclosure of Material Connection: Some of the links in the post above are “affiliate links.” This means if you click on the link and purchase the item, I will receive an affiliate commission. Regardless, I only recommend products or services I use personally and believe will add value to my readers. I am disclosing this in accordance with the Federal Trade Commission’s 16 CFR, Part 255: “Guides Concerning the Use of Endorsements and Testimonials in Advertising.”

11 thoughts on “4 Reasons to Adventure Later in Life”