At the end of last session, we left our heroes at the moment of their triumph—they had forced a winged demon to flee their wrath on the wings of a teleport spell.

Quickly, they searched the chamber but finding nothing of particular interest they pushed on through the only door they had not yet explored. Beyond they found a many levelled room of white marble. In the centre of the room at its highest point, a fire pit pierced the floor; grey flames filled the pit, which piqued the party’s curiosity particularly when they noticed one section of wall was of smooth, grey stone. A single torch sconce with a torch within was affixed to the grey section of wall.

The party moved cautiously into the room to search. Aq investigated the flame pit and was immediately attacked by four flying demonic heads seemingly comprising nothing but a tooth-filled maw! However, although the creatures’ appearance was sudden and fearsome they were no match for the party and were quickly slain. 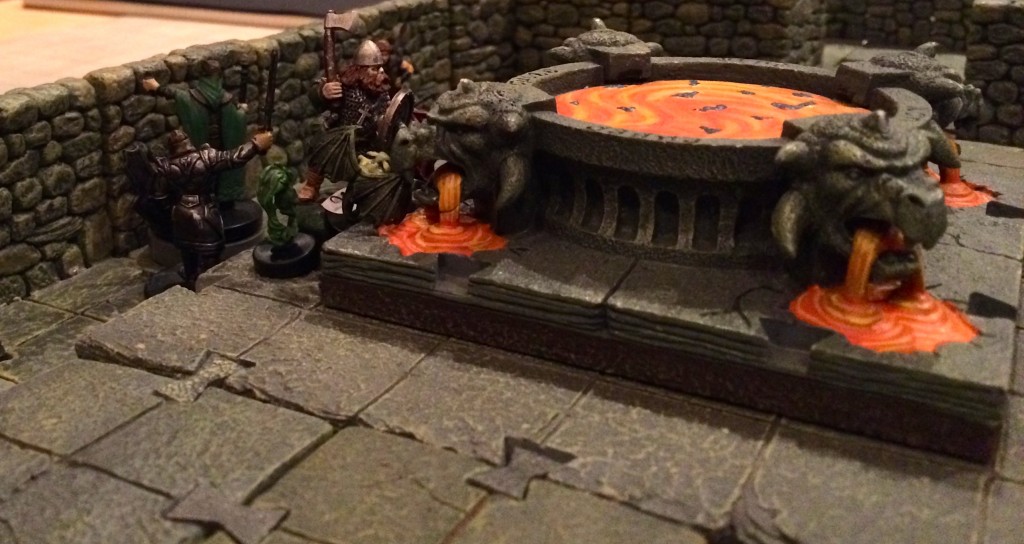 The group then discovered that lighting the torch with the grey flame and placing it back in the sconce caused the grey section of wall to slide aside. Beyond lay a long staircase plunging down deeper under the Lady’s Light.

Narfu was volunteered to investigate the staircase and moving cautiously he reached the bottom without incident. At the bottom, a painting of a beautiful woman—the Runelord Sorshen—decorated the wall. An inscription on the wall hinted that to proceed elsewhere the painting’s feet must be kissed. This Kara and Zainnis did, and suddenly they found themselves elsewhere—on a small stone platform jutting out into a gloomy lake lit by a faint phosphorescent light. Nearby a waterfall tumbled over a cliff into the lake and the two brave adventurers realised they must be at the bottom of the waterfall they had discovered two days ago.

With this discovery the two brave adventurers decided to return to their companions. This they did by grasping the outstretched hand of a demon carving. They were lucky—this did indeed return them to their companions— and the returned just in time to interrupt an argument about the paladin kissing the feet—seemingly in veneration—of an obviously evil woman.

A brief discussion ensued about the best course of action, but one door yet remained unexplored in the level above and so the party retraced their steps. Beyond this door they found a long hallway pierced with many doors; one was encrusted with frost. Ignoring this door—which they later discovered to be trapped—and all of the others—which eventually they discovered to be nothing more than bedchambers—they went all the way to the end of the corridor and opened the final door. An opulent bedchamber lay beyond. Several of the party were particularly excited by the mother of pearl detailing on the ceiling and this was when madness—or at least confusion mixed with avarice—first descended over the group.

After about 20 minutes, the party had managed to steal the room’s bed sheets and recover two pieces of mother of pearl from the ceiling. Although not satisfied—and clearly desirous of more looting—the “heroes” eventually decided to push on as another door beckoned them ever deeper into the complex. Through this door lay a small chamber with three other doors piercing its walls. A brass grill in the floor warded a small pool, which Kara eventually discovered to contain powerful dispelling enchantments. Lascivious paintings on the walls provided some light relief and gave hints as to what might lie through the other doors.

Sure enough, one door opened into an alchemist’s laboratory. Several of the jars therein radiated magic. In his excitement to retrieve the jars, Narfu made a fatal mistake—and one exploded! This set of a chain reaction of alchemical reactions that badly injured several of the group. The party’s run of bad luck didn’t stop there. They next decided to investigate a large corroded urn, which turned out to contain two grey oozes! These creatures were slain relatively easily, but after this latest setback, the party decided to try another chamber.

The next chamber yielded nothing but an interesting book and some strange contraptions of unknowable purpose. However, the final chamber proved somewhat more dangerous. A strange symbol was daubed on the floor and beyond it—against the far wall—lay a book. Kara determined the book radiated overwhelming magic and this got several of the group very excited—what powers could lurk within its covers? With this in mind, the party—of course—sent in Narfu to investigate. However, as he got near the strange pattern on the floor a terrible wormlike creature with tentacles appeared! It moved quickly and cast a terrible miasma over the party causing widespread confusion among their ranks.

As the battle began proper, several of the party—confused—attacked each other or babbled insanely. Nok, hurled fire at the beast—which slightly injured it—while Grooble conjured a weapon comprising pure force to damage it. Meanwhile, Kara stabbed herself in the face and Morden attacked Narfu! Zainnis also stabbed himself with an arrow, but moments later—in a few seconds of precious lucidity—he dipped his foot into the magic pool possessing dispelling powers! This dispelled the confusion magic cloaking the young ranger and allowed him to act normally…