At the end of last session, we left the party’s scouts floating out onto the choppy waters of a subterranean lake.

As Narfu tried to guide the boat around to a small beach, the strong current caught the boat and dragged it around the island. Despite his best efforts, the boat drew rapidly closer to the waterfall at the other end of the lake. Desperate to avoid going over, Narfu tried to—and succeeded—sticking the boat to the cavern wall with a tanglefoot bag! The manoeuvre worked—temporarily—and the scouts gained a brief respite.

However, it wasn’t long before the water again caught the boat and began to drag it ever closer to the waterfall. With no other option, Grooble threw a feather token into the water and created a huge boat for the scouts to scramble onto. As the other boat plunged over the waterfall, the party scrambled onto the magically created vessel.

However, unfortunately, the boat hit the island in the middle of the lake. This animated the giant glass statue on the island and battle was joined. Zainnis shot it repeatedly, but the thing’s hide was preternaturally tough. It seriously wounded the young ranger, in return. Seeing this Narfu leapt onto the island ro distracted it and the thing attacked him—wounding him severely. Grooble—after discovering the statue could somehow reflect magic back at its source—began to expend his healing energy at a prodigious rate to keep the monk alive.

Luckily, the sounds of combat reached the rest of the party and they jumped into the other boat to come and help. Nok enlarged himself and began to pull the other boat toward the island. By now, Narfu was in serious trouble and had to use a divine gift the Shalm himself had gifted him to keep himself alive. Zainnis rushed to his aid, attempting to divert the thing from attacking his friend. He succeeded, but was grievously injured in return.

By now, the guardian was badly wounded and the arrival of the rest of the party sealed its doom; a tremendous strike from Aq finished it off.

With the battle over, the party’s thoughts turned to rest. They decided the door overlooking the beach could ward a good place to do so and so they quickly healed what wounds they could and continued onwards.

The room beyond was empty save for many lewd and lascivious paintings on the walls. After examining them, Kara insisted on checking out the only corridor leaving out of the room; she was worried about what could lie beyond.

Investigating, she discovered an iron portcullis-like gate across the hallway beyond, guarded by a single pale-skinned, dark-haired warrior. He asked her for the password, and not knowing it the sorcerer withdrew.

Back in the room, the party discussed their next move. Rest was required, and rest was had! The next morning, the party again discussed their plan. They decided to speak with the man guarding the gate and try to guess the password (or to weedle it out of him).

However, sadly, this plan lasted but seconds. When they approached the man, he asked them if they knew the password. Without thinking, Nok said, “No.” and so the man withdrew into cover to defend himself. Before he could do so, though, Kara tried to learn the password by casting suggestion on the man, but he resisted the spell.

Seeing this Narfu created cover with an obscuring mist and the warrior retaliated with defensively spellcasting of his own. When Narfu tried to pick the lock of the portcullis, his lock pick broke and at that moment the man darted forward to unleash a burst of flames into the corridor. Most of the party were too far away to be injured, and afterwards Grooble darted forward and cast mending on Narfu’s lock pick. The monk tried again to breach the lock; sadly, this time Narfu badly bent the lock pick and jammed the lock! 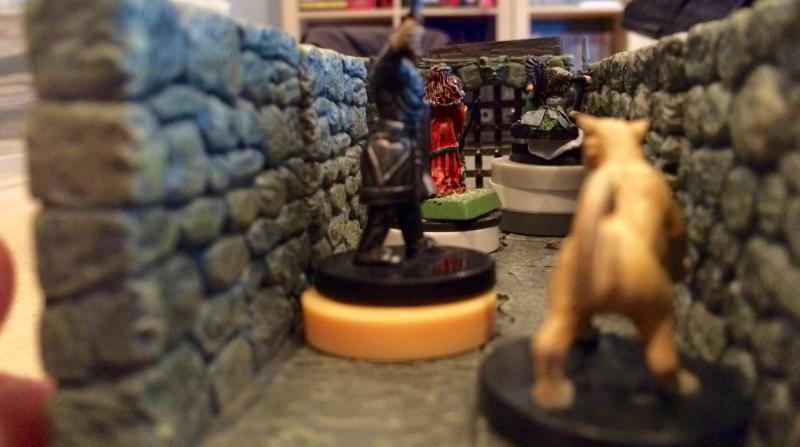 At this development, the party began to wonder how they would ever get through the stout iron gate…