At the end of last session, we lift our heroes battling against a horrific spawn of the darkest, most depraved nightmare the world could conjurer forth.

The heroes fought on. The spawn was already injured and as the battle continued, it backed off slightly. Aq and Tristham called upon their divine powers to smite the horrible beast and Narfu used his steel-trap-like reflexes to dodge the thing’s tentacles. Although Aq and Tristham were both repeatedly wounded, Grooble’s dwindling supply of healing magic proved sufficient to keep both paladins on their feet and in the battle. 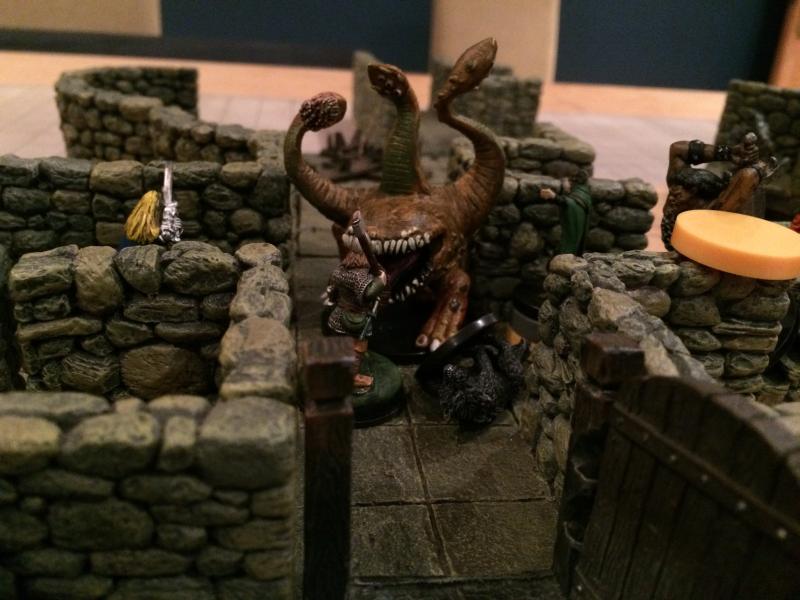 Over the next minute or so the party’s attacks began to tell, and the creature failed to land any particularly devastating blows. Eventually, Aq struck the final blow and the thing collapsed, whereupon it began to dissolve and bubble until nothing but a white powder was left. With victory finally achieved, the party relaxed—slightly—and healed what wounds they could.

They looted Crove’s quarters, explored some more of the cellar and then left. Reaching the surface, they discovered the rain had stopped falling and that the dark clouds that had so beset the town over the last few days had begun to clear.

Returning to the town’s mayor, the party reported their success. The mayor waxed lyrical about their heroics and how happy he was that they had triumphed. Nok growing tired of the mayor’s overly flowery speech threatened the happy man with great violence if he did not pay them. This the mayor promptly did, but shocked by the wizard’s rude, unbecoming conduct did not double his reward as he had initially planned to do. Thus, they left the manor house both richer and poorer!

With their business concluded, the party retreated to the Mermaid’s Mistress to rest, heal and sort through the loot they had recovered. Thus, they rested aboard ship for two weeks. Several of the heroes engaged skilled craftsmen in town to enchant various items while others wished to reflect on their experiences.

After a two-week rest, they were ready to continue their adventure; 1,000 miles to the south lay the object of their quest: the Lady’s Light and the shard of the shattered star hidden somewhere nearby…