At the end of last session, we left our heroes pondering their next move. They had crushed the derro and their carrion golem servant and now stood before an ancient secret door, apparently unopened for ages.

However, the party’s resources were running low; in particular Grooble had run out of healing magic after the desperate battle against the derro. Thus, they decided to retreat and rest. This they did, retreating up several levels to the dilapidated storeroom that had so often hosted their overnight rests. Again, they were undisturbed and so the next day, they returned to the derros’ lair. Of course, (predictably) a minor argument arose. Some of the party wanted to investigate the secret door immediately while others want to check out what lay behind some of the other doors.

Cautiously investigating, Narfu discovered that silence reigned behind most of the doors, except for one from which he heard a low sobbing. Predictably, the party—led by the heroic paladins—investigated and found a torture room of sorts. Tied to the table—and in a terrible state—was their old “friend” Fenster the Blight! Badly injured and still suffering the affects of several diseases he was in no state to accompany the party, but after some healing he professed himself able to barricade himself into the room until the party’s return.

Now, the party’s attention turned to the secret door. Narfu confirmed it hadn’t been opened for ages and that it wasn’t trapped. After some final preparations, the door was opened and the party advanced. Beyond, they discovered a small room shrouded in cobwebs and dust. In one corner lay the dessicated remains of a spider-like monstrosity of hideous proportions and visage. Kara identified this as a shriezyx and took the time to remind everyone of what she knew about the creatures.

The room’s only other feature of note was a spiral staircase descending yet again into darkness. With no other option, the party began the descent. The staircase circled deeply down into the earth—perhaps over 200 ft. Eventually, the party emerged into a short hallway leading to a brightly painted room. At the far end—atop a high dais—lay the object of their quest: here lay the second shard!

Before they could claim it, however, they had to defeat its final guardians—two more very much alive shriezyx. Battle was joined!

As the party surged into the room, the shriezyx struck by hurling webs at Zainniss. The webs entangled him, but also slowed him considerably making it hard for the ranger—who sent much of the fight furiously hopping away from his foes—to help his friends. No matter, Narfu, Tristham and Aq charged into the room and began hacking at their foes. Narfu—remembering Kara’s words—hurled alchemist’s fire at the beasts and although this injured and scared the beasts it merely served to make him their number one target. Nok similarly tried fire magic and although he missed his target one of the creatures hurled itself at him. 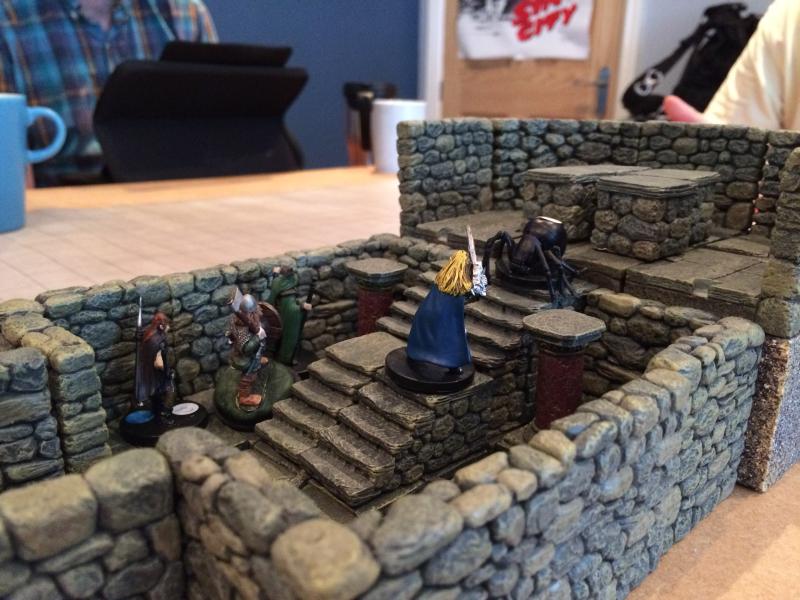 Sadly, Kara stood in the way of its assault and the brave sorceress was cut down as one of the beasts made its way down the corridor to the wizard. By this point, Narfu was badly injured and Grooble was constantly using his healing magic to keep his friends alive. As the paladins hacked at their enemies so their enemies bit, slashed and tore into the party. In short order both Nok—who recently enlarged himself—and Grooble fell before their furious assault. However, by this time both shriezyx were badly injured. Within moments of one another both were dealt wounds that should have been mortal, but both continued fighting—somehow kept alive (perhaps by their implacable fury toward the PCs). 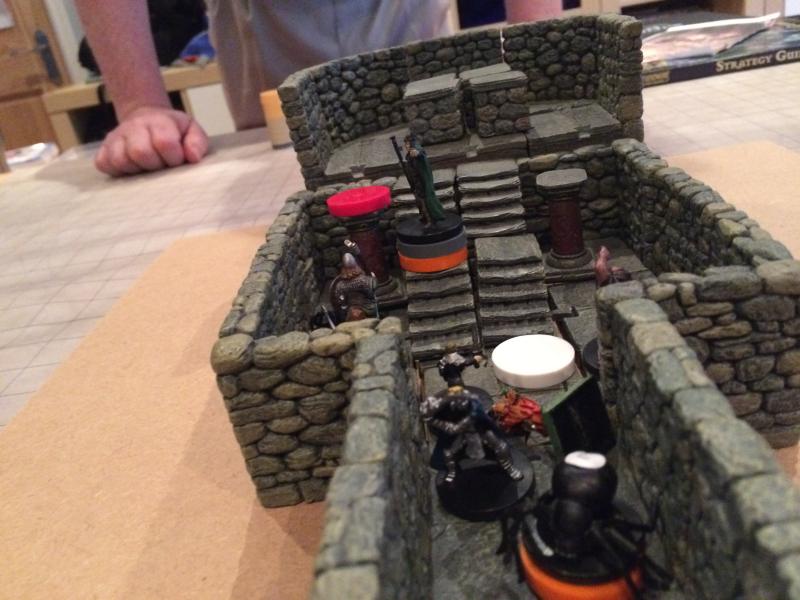 At this very moment, Zainnis finally extracted himself from the webs that had bound him for so long and threw off their magical slow effect. Now able to act freely, he swiftly shot both beasts dead.

Silence descended on the party. A tremendously amount of healing ensued and eventually the party were ready to claim their prize. First up the stairs was Kara who grabbed the shard and then immediately dropped it. Next was Zainniss who also dropped it after he felt suddenly ill. Eventually, Grooble picked it up and stuffed it in his pack.

With their quest at an end, the party retreated to Marner (picking up a very grateful Fenster on the way) and apprised Shel Heidmarch of their success.