At the end of last session, we left our heroes resting after their harrowing battle against three aquatic sinspawn. The party was victorious and had finally made it across the flooded chamber which had until now barred their further exploration of the dungeon.

Beyond the chamber, a sloping corridor stretched downwards into darkness. With no other way to go, the party formed up and moved off. At the bottom of the passageway, the party discovered a chamber clearly once part of a sewer system. A cistern of murky water dominated the chamber and three passageways lead away in various directions. One was completely flooded, but the others had narrow walkways that yet remained above the water. From one corridor came the sound of low, guttural singing.

Kara’s spider climb spell was still running and so she volunteered to investigate the source of the singing. However, being human she could not see and so cast light upon herself which destroyed any chance she had of surprising the singer. Nevertheless, she discovered a room almost completely flooded. A bridge rose out of the water and linked up to a set of stairs leading away to the south. Under the bridge floated an undead monstrosity—a lacedon! At sight of Kara, the creature swam further under the bridge and at sight of the undead Kara retreated back to her friends. The party decided proceeding in that direction would be foolish and so Kara continued her scouting. To the south, a large flooded chamber featuring rotting planks seemed to contain foul air which caused Kara to cough and splutter as she returned to her companions.

The final passageway linked up with a natural cavern that seemed the most promising way forward. Nok produced a ladder from his rather handy haversack and the party used it to cross the water channel running down the corridor.

The passageway led to a small natural cavern containing a small pool. As the party move passed, a huge lump of green slime concealed among the fungi and mushrooms festooning the place fell from the ceiling and narrowly missed Narfu. While the monk was unhurt the slime blocked the passageway and the party’s progress was temporarily stymied. Luckily, Nok has a spade with him, though, and the party used that to cover the slime in earth and stone. This clever stratagem enabled them to continue without backtracking and they continued onwards.

More passageways lay beyond and in short order, the party discovered a large chamber in which three strange blue dwarves talked. Seeking a way to out flank the dwarves the party followed another passageway that led to a cistern crossed by four bridges. Crossing the bridged proved perilous as snake-like creatures laired in pipes hanging over the cistern. However, despite their sudden appearance, the party slew the beasts relatively easily and continued onwards.

Beyond they discovered another way to come at the dwarves and so hatched a clever plan. Zainiss and Nok would remain here—the corridor ended in a balcony overlooking the dwarves—while the rest of the party attacked from the other direction. 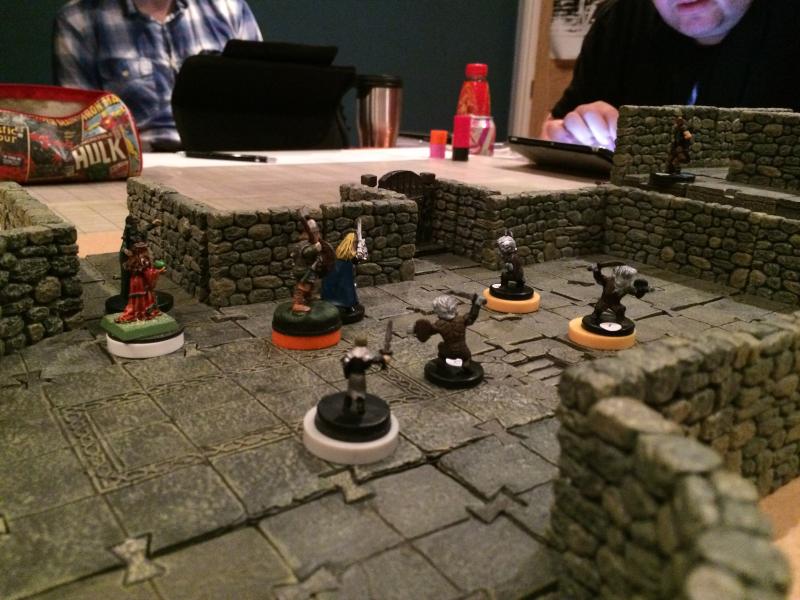 And so the trap was sprung. The party surged into the room and attacked. Initially taken by surprise the dwarves fought back. Grooble discovered the creatures were magic resistant when two of them resisted his sound burst and moments later half the party was stunned as the dwarves—now identified as derro—hurled their own sound bursts at the party. Kara tried to use an illusionary fireball to confound the creatures, but again their innate magic resistance protected two of them. The third fell for the trick and staggered about, thinking he was badly burnt. 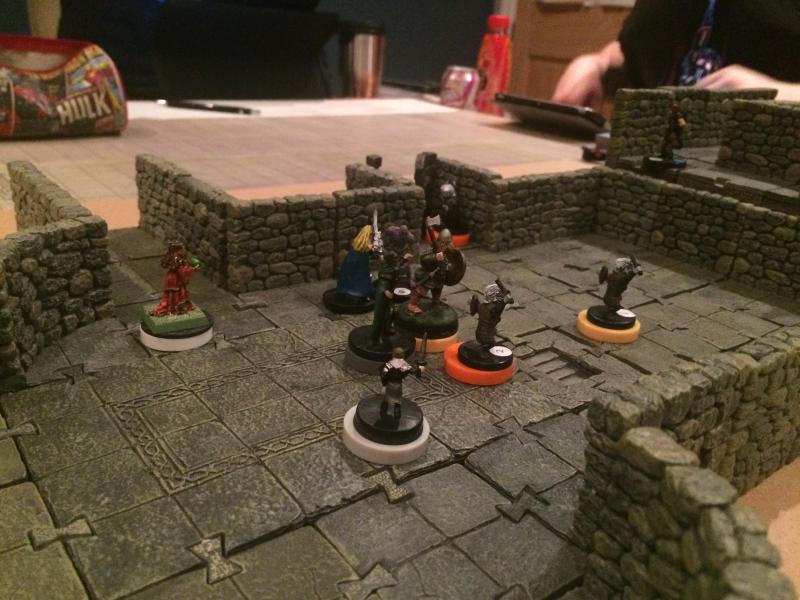 By now the party’s attacked had began to tell on the derro. With Zainnis’ and Nok’s accurate missile fire from the balcony the derro looked doomed. Seeing how things stood, one rushed to a nearby door, hurled it open and summoned its pet to aid them. A strange humanoid—seemingly crafted from the bodies of several other creatures shuffle forth and attacked. Immensely strong, the creature—later identified as a carrion golem—repeatedly punched Tristham. However, the paladin’s innate resistance to disease protected him from the full effects of the creature’s attack. 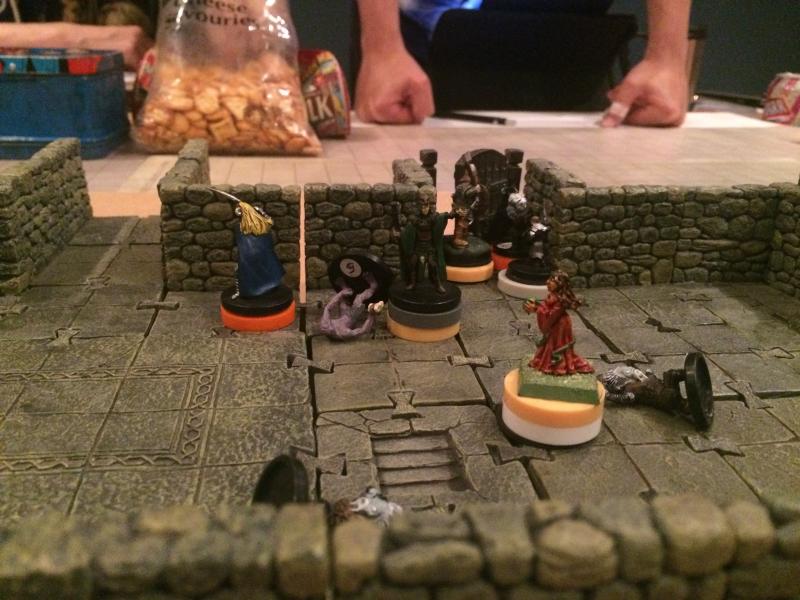 By now, two of the three derro had fallen and when the carrion golem was destroyed the fate of the party’s final enemy was sealed. Within moments, it also lay dead at their feet. Before the party could properly rest, however, Kara immediately went to one of the chamber’s walls and declared the shard they had hunted for so long lay just beyond. In short order, Narfu found an incredibly well hidden, ancient secret door that—he suspected—had not been opened for hundreds of years. Excited by this discovery, the party plotted their next move…

One thought on “Shattered Star #18: The Blue Dwarves”