Most adventurers are stalwart defenders of justice and the common folk. A few, though, have darker hearts and motivations. Luckily, done right, there is room for both types in the typical adventuring party. 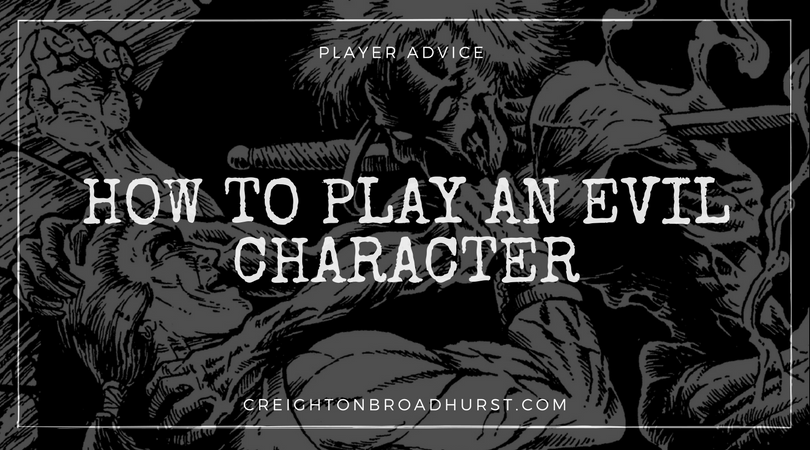 Almost every gamer I’ve met over the last 30 years has played an evil character at some point. Sometimes whole campaigns are based around the concept of an evil party. Normally, however, the party is predominantly good and only one or two of its members are evil. This can create challenging, but immensely rewarding roleplaying experience for all involved. (In my own Borderland of Adventure campaign, for example, one of the most enduring characters has “questionable morals”).

For my money, the best example of an evil character in a good group comes from Dragonlance. While Raistlin didn’t start off as evil, as the campaign developed his dark nature slowly asserted itself until he finally fell into darkness. Even then, though, his companions didn’t turn on, and kill, him.

If you want to play an evil character in a predominantly good-aligned group, remember the following:

Have you played an evil character in a predominantly good adventuring party? Got any tips? If you do, leave them in the comments below and help your fellow players play their evil characters better!

48 Comments Share Tweet Print Email
Categories: Gaming Advice, Player Advice
Disclosure of Material Connection: Some of the links in the post above are “affiliate links.” This means if you click on the link and purchase the item, I will receive an affiliate commission. Regardless, I only recommend products or services I use personally and believe will add value to my readers. I am disclosing this in accordance with the Federal Trade Commission’s 16 CFR, Part 255: “Guides Concerning the Use of Endorsements and Testimonials in Advertising.”

48 thoughts on “Player Advice: How to Play An Evil Character in a Good Group”