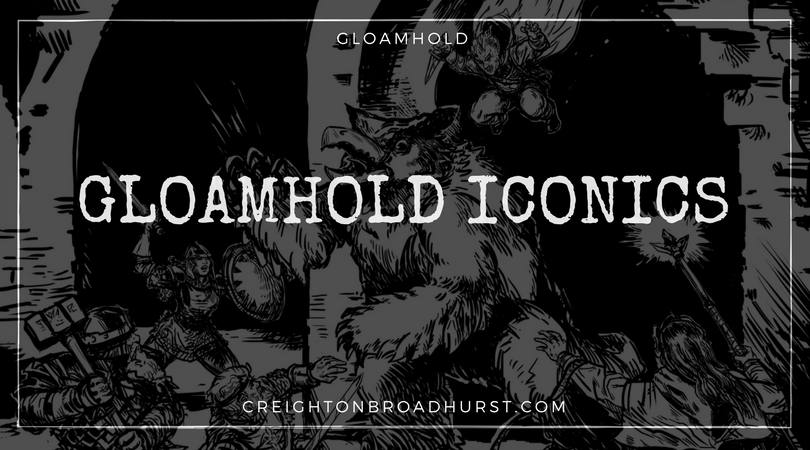 So, why did I bother designing iconics?

The iconics are important because they depict typical adventurers for the Gloamhold campaign. In effect, they set the scene and—to a certain extent—they peg the players’ expectations for the setting. For example, a campaign featuring a drow and a half-dragon among their

The iconics are important because they depict typical adventurers for the Gloamhold campaign. In effect, they set the scene and—to a certain extent—they peg the players’ expectations for the setting. For example, a campaign featuring a drow and a half-dragon among their iconics would feel markedly different to a campaign featuring more traditional choices.

Designing iconics for Gloamhold has an additional challenge. When I began Gloamhold’s design process, I assumed I’d be writing the dungeon using the Pathfinder rules set. However, it turned out many of my blog’s readers had different ideas. It transpired they used a wide variety of rule systems, including Pathfinder, 1st Edition AD&D and 5e.

After a long discussion and some thought, I decided it was best to write Gloamhold to be as systemless as possible. This makes designing the iconics somewhat tricky. Of course, it is impossible to write a completely systemless sourcebook, but luckily some rules terms are pretty generic—dwarf, elf, fighter, cleric and so on. (And if I foolishly write “rogue” instead of “thief” of vice versa most GMs should be able to struggle through the conversion).

In any event, I’ve settled on this character mix, which covers all the bases in terms of game play. As you can see, it’s a traditional mix—and that’s intentional as a lot of the race/class combinations have their roots in “classic fantasy”, which is my preferred variety.

I grew up with old-school (1st Edition era) roleplaying and that’s a huge part of the feel I want to capture for Gloamhold. Dwarf fighters, halfling thieves and elven wizards are as iconic as you can get, in my opinion. (Of course, one person’s iconic is another person’s cliche, but you can’t please everyone!)

Tall and brawny, Aune has short dirty blond hair and grey eyes. She wears battered scale mail and her scarred hand is never far from her longsword’s pommel

Strong, brash and brave Aune is—perhaps—the quintessential warrior. Once a carpenter’s apprentice, she tired of her boring, mundane life and instead trained to be a warrior. Several years spent guarding merchants travelling between Ashlar’s towns and villages hardened her to life on the road, but didn’t provide the excitement she so craved.

Elmeri keeps his dark brown hair cropped short and his armour and gear in excellent condition. Clad in the white and gold raiments of his god, he cuts a splendid figure and is—if truth he told—a bit too proud of his appearance.

A Languardian from birth, Elmeri has always been fascinated by Gloamhold’s grim, doom-shrouded halls. From an early age, he haunted inns and taverns known to be favoured by adventurers returning from quests “across the bay” and became obsessed with one day venturing there himself. A devout follower of Darlen, he has trained and prayed ceaselessly for the day he can fight the ancient evils lurking in Gloamhold’s endless caverns.

Short and slender, Miro wears mottled grey and black leather armour and carries no less than four daggers on his belt. His long wavy hair is light brown in hue and his pale green eyes sparkle with amusement.

Hailing from Underdell, Ashlar’s largest halfling community, Miro grew up surrounded by petty thieves and brigands. Their petty larceny—stealing from travellers and picking the pockets of those visiting Underdell—were not for him. Daring and adventurous, Miro dreams of a larger score—one that will enable him to retire in splendour. With his race’s natural propensity for stealth and silence, Miro is the perfect scout for groups exploring Gloamhold.

Tall for an elf, and almost impossibly thin, Tahlys moves with quiet grace. Her purple eyes dart about missing little and her fingers are often busy playing with various charms hanging from a slender silver necklace. She wears sensible clothes of grey and brown.

Tahlys is not a native Ashlarian; drawn to Languard by persistent rumours of ancient magics and lost secrets hidden in Gloamhold’s dust-shrouded halls she greatly desires to explore its forbidden depths. A student of all forms of magic, she does not enjoy living within Languard’s grim, foreboding walls. However, she will sacrifice much to discover more of the ancient magics hinted at in some of the elves’ oldest stories and thus endures life among the short-lived humans.

Almost as tall as he is broad, Valrim is a stout, well-muscled fellow. His eyes are as black as flint and his hair is carefully pulled into a ponytail. His beard is elaborately plaited. He wears well-tended scale armour and carries a warhammer over one shoulder.

Scion of clan Nurthen , Valrim dreams of finding a new home for his now scattered fellows after they were forced from their mountainous hold by rampaging dragons. Living among humans in the sunlit upper world is not for them and so he searches for somewhere else his fellows can call home.

The ancient ruins said to lie within Gloamhold’s deepest reaches fascinate Valrim and he greatly desires to gaze upon the shadowed precincts of the Twilight City. Perhaps there he can find a refuge for his folk.

Valrim is a skilled miner as well as a doughty warrior.

Is this a good mix of iconics? Did I miss something? Let me know, in the comments below

8 Comments Share Tweet Print Email
Categories: Gloamhold, Raging Swan Press
Disclosure of Material Connection: Some of the links in the post above are “affiliate links.” This means if you click on the link and purchase the item, I will receive an affiliate commission. Regardless, I only recommend products or services I use personally and believe will add value to my readers. I am disclosing this in accordance with the Federal Trade Commission’s 16 CFR, Part 255: “Guides Concerning the Use of Endorsements and Testimonials in Advertising.”