At the end of last session, we left our heroes in the beleaguered town of Piren’s Bluff as an undead horde shambled toward them.

While her comrades dealt with a small band of undead who reached the town quicker than their fellows, Karelia explored Vendikon Keep. After she has explored the ground floor, she resorted to magic to explore the more heavily guarded upper levels. The second floor seems to comprise guardrooms and the baron’s personal chambers.

However, the tower was much more interesting to the plucky wizard. Using magic to transform into an air elemental she flew up to the upper level and peered through the windows. Within, she spied the baron himself working upon some blasphemous monstrosity—presumably a flesh golem. Even more alarmingly, a quasit was assisting him.

Armed with this information, she returned to her follows who had congregated at the First Light (which had become the party’s unofficial headquarters). It now seems clear to the party the baron was up to no good. It also seemed the townsfolk were doomed unless the party did something.

Eventually, they decided to contact the so-called resistance and see what could be done to get the townsfolk into the keep once the undead horde attacked. Through a circuitous route, they finally managed to speak to the blacksmith, Smaar Junderfut, who promised he would marshal as many of the peasants as possible when the time was right.

Satisfied they had done all they could, the party retired for the night. It had been a long day. Their rest was not destined to be peaceful, however. Just after midnight, the party were woken by hammering on the shrine door, and cries of, “Fire.”

Rushing to the stockade, they could see no sign of fire until they looked far to the north. There—against the horizon—a huge blaze lit up the night sky. They wondered what could burning, until one of the locals said he reckoned it was Windsong Abbey.

Thaladan confirmed this news by clutching the shard he wore and concentrating. In his mind’s eye he could see the abbey as if from far above. Fighting surged throughout the complex and much of the surrounding village was on fire. As he watched, a huge gout of flame blasting down from the sky melting part of the gatehouse. At this, his vision faded and relayed the grim news to his comrades.

This sudden development caused consternation among the party. But there was nothing to be immediately done and so the party retreated to the shrine to rest.

The next morning, they awoke and prepared for what would no doubt be a grim day. As they did so, a breathless Grey Maiden rushed to the shrine. Something terrible had landed outside the main gate!

The party rushed to the gate. There about 200 feet away crouched a huge skeletal dragon. As they watched, it launched a huge gout of fire into the air. Standing next to the creature was another skeletal figure. Karelia quickly identified the creature as a lich. As she did so it strode forward stopping—seemingly unknowingly—practically on top of one of the buried urns filled with greek fire.

The creature called out to the town. It professed to not care about those huddled inside the flimsy wooden stockade. All it wanted was the town. Everyone inside was free to leave. If they did so by dusk, they would not be harmed. By now, the party were pretty sure something was going on.

Cortana and Thaladan rushed back to the Pact Hall and spoke to Shiyara the priest. Cortana had received a vision from Heironeous during the night directing him to “Seek what he would not normally seek” and the clever paladin realised this must mean Hell’s Vengeance—the brother weapon of the axe he now carried.

Quickly they spoke with Shiyara and she confirmed much of what they suspected. Surprisingly cooperative for a follower of Hextor she explained much of what they had guessed. It seemed that below Windsong Abbey in a deep cave there lay the Doomsday Door, through which in ages past a great horde of undead had burst. The faiths of Hextor and Heironeous had destroyed the horde and shut the door, using a “shard of ancient power” to seal it shut. As a backup, the two faiths had forged two weapons: Hell’s Vengeance and Heaven’s Fury to act as further keys in case the first key should fail. Ancient texts in the shrine spoke of a lengthy ritual—perhaps taking an entire week—which would unseal the door. Such an act must not come to pass and so Shiyara volunteered to join the party.

Thus bolstered with this news, the party hastily reconvened to discuss what to do next. Quickly a consensus was reached. The party would help as many of the townsfolk as possible into the keep. Then they would have to abandoned Piren’s Bluff and push north to assault Windsong Abbey which was now surely in the clutches of the undead. Such was the greater good… 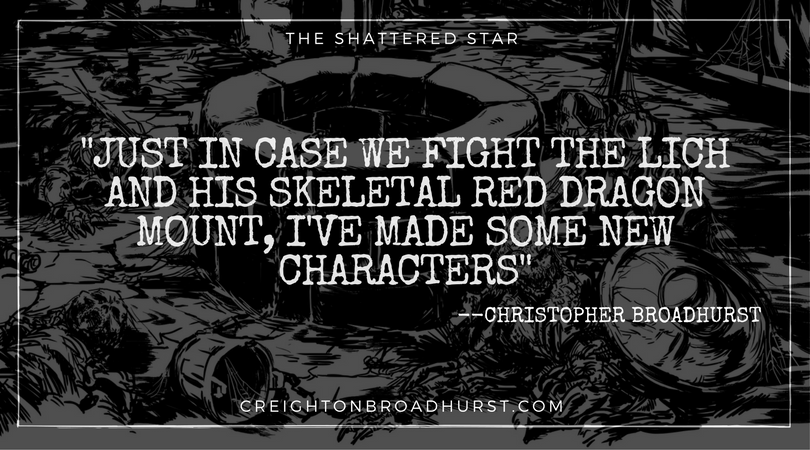 One thought on “Shattered Star #83: Fire in the Night”