At the end of last session, we left our heroes experimenting with a statue-triggered teleportation system.Their experiments bore fruit; but sadly, it was poisoned fruit…

As the thunderous cacophony of sound faded something horrifying appeared in the unoccupied alcove—a huge, vulture like demon of fell aspect. Later identified as a vrock, the creature tore into the party. Thaladan called on his patron to aid in the fight, but the creature proved fast and deadly.

In short order, the paladin was knocked down; only Grooble’s healing magic kept him from death. In the meantime, the rest of the party sprang into action. Karelia used a slow spell to prevent the creature from using all its attacks and Narfu kept it pinned in place with a tanglefoot bag.

Although the creature cloaked itself in an illusion of many images, and covered the party in strange spores that began to burrow into their skin in its slowed state it proved no match for the party and was eventually slain. 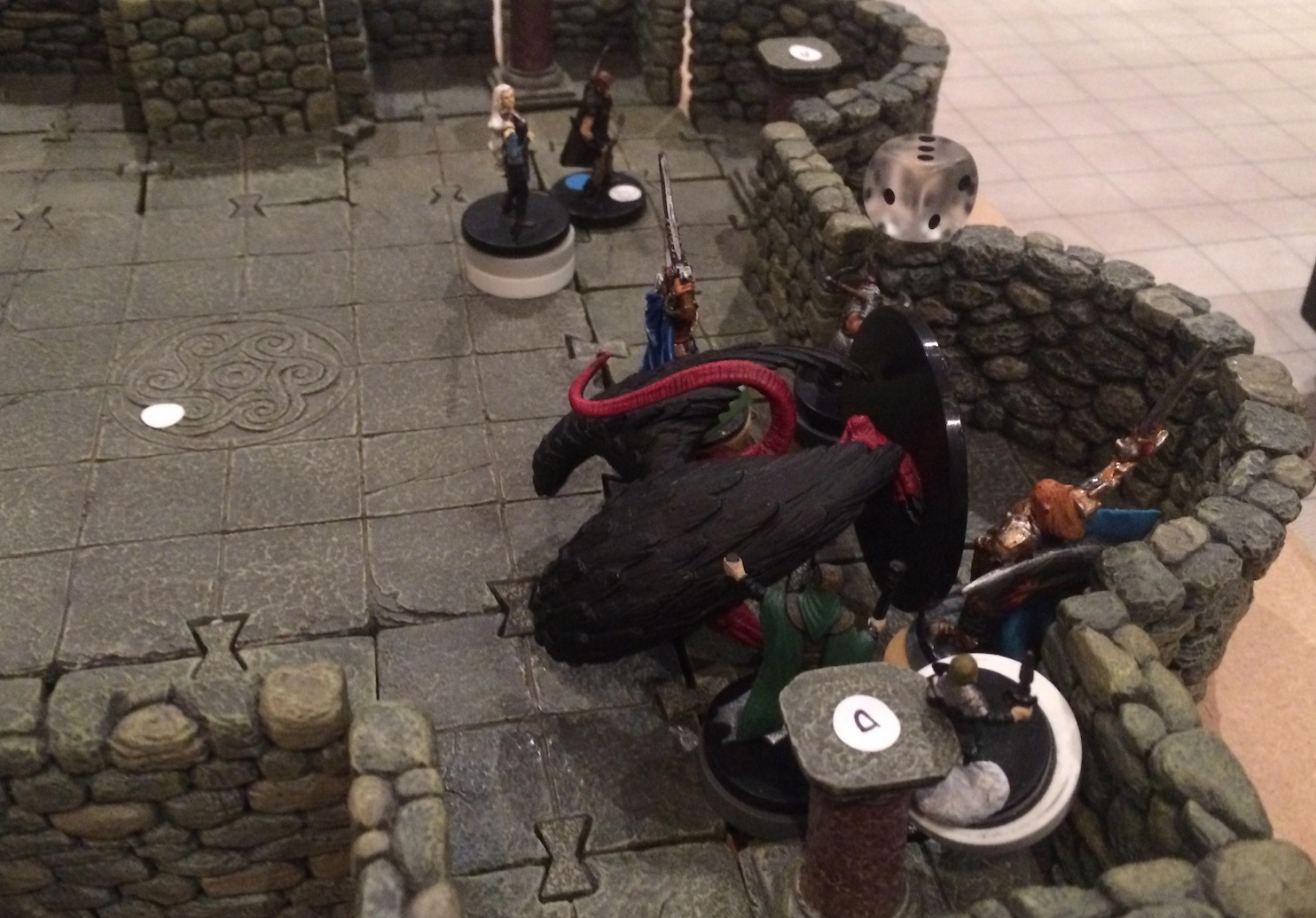 However, the spores growing over some of the party did not die off immediately with the vrock. They continued to bury into Grooble, Sarif and Narfu’s skin. A brief panic ensued, but eventually the spores died and were scrapped off.

At this point, the party wisely decided to retreat. As they did so, Sarif spotted a hitherto unknown secret door near the base of the spiral staircase leading up to the statue room in which they fought the vrock. No matter, the party decided to investigate this after a good night’s rest.

Returning to the Grey Maiden’s old lair they rested, but their rest was not undisturbed! During the last watch, the guards heard a the sound of metal on stone. Quickly realising that someone was trying to smash the teleportation statues—which would deny them further access to the Lady’s Light—the party sprung into action.

Rushing into the chamber, they discovered the inncubus that had caused them so much trouble before trying to destroy a statue. As the creature’s assault continued Zainnis—desperate to slay the creature after Karelia had struck it with a fireball—unleashed a mighty shot which hit the creature in the forehead killing it instantly. There was much rejoicing.

The rest of the night passed without incident and now well rested, the party decided to continue their exploration. Passing through the secret door discovered yesterday they discovered a chamber decorated with murals oozing blood!

The party’s investigation were interrupted by a half-dozen blood mist creatures oozing from the walls. The creatures suckled on the party’s blood and things seemed grim. As they drunk deeply of the PCs’ vitality, the horrible creatures seemed to grow in strength. 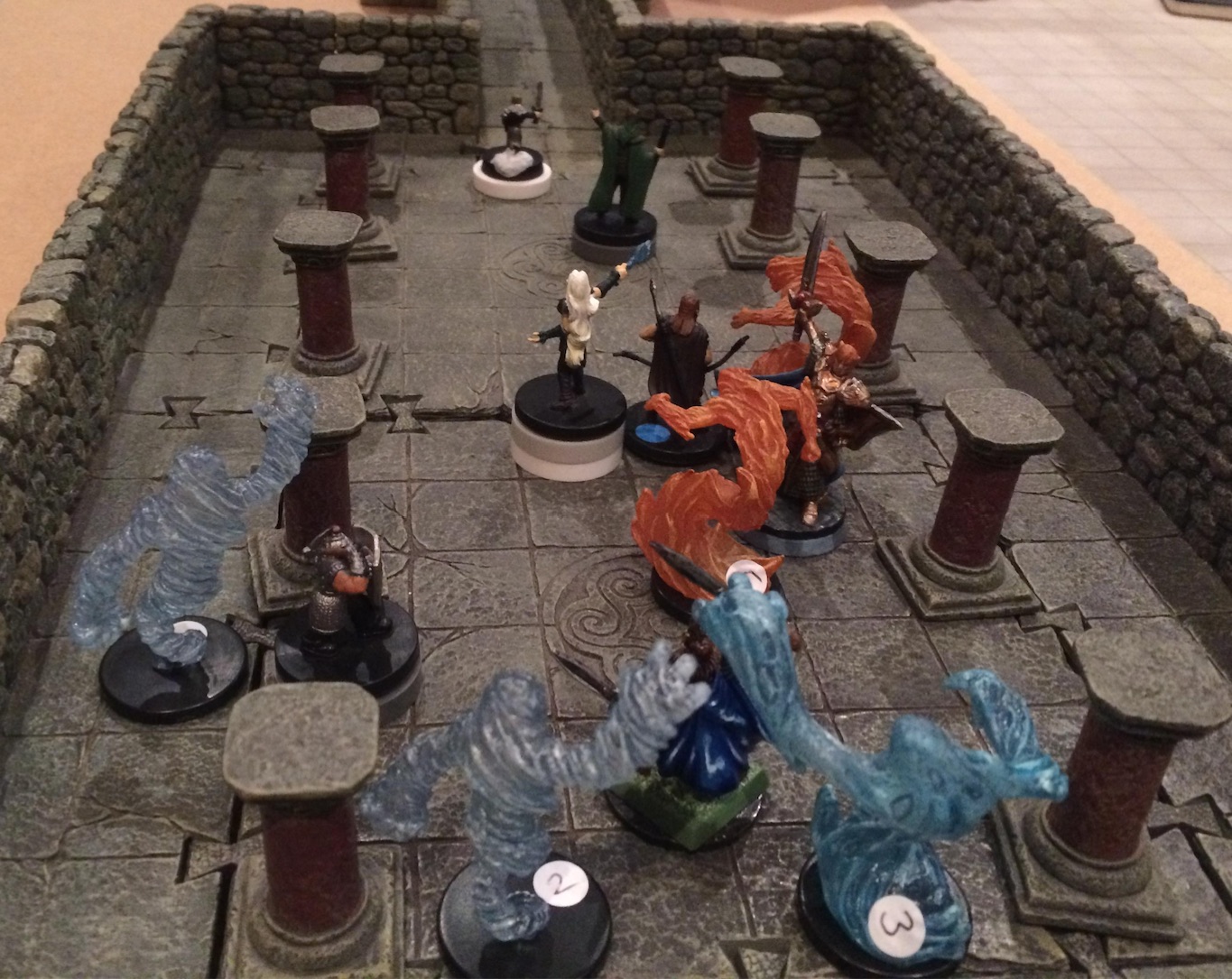 It was then Zainnis unleashed a devastating barrage of shots. Hasted by Narfu his powerful shots flew true and he devastated the attackers killing three of them in seconds (GM’s note: he had four attacks in the round and three were confirmed criticals with a longbow!) The battle ended shortly thereafter.

Exploring further, the party discovered another chamber this time with a single pillar seemingly to ooze blood from its flanks. Wisely, the party decided to turn back and instead focus on the statue room high above them at the top of the spiral stair.

Return to the chamber, they began a more careful exploration of the statues—the heroes seemingly keen not to summon another vrock (or something worse). After much conversation, the party hugged the statue of Sorshen and the statue of Karzoug. When Sorshen was hugged, the floor in the unoccupied alcove began to give off a golden glow. When they hugged Karzoug’s statue, the golden light began to flicker as if were aflame…