At the end of last session, we left our heroes resting aboard ship at Kaport Bay. They had saved the city from a terrible beast summoned forth from the Dark Tapestry and their efforts had enervated them.

After a few weeks, they were ready to resume their journey. Thus, the Mermaid’s Mistress resumed its voyage as winter storms hovered on the horizon. Thirty miles away was the town of Low Scarport, which they passed without incident. However, further along the coast lurked their greatest challenge yet—the Isle of Lost Souls and the Causeway of Fiends.

The crew were already nervous of approaching these foul, benighted places and their fears were further compounded by an unfortunate bad omen. A day after the ship had passed Low Scarport, a huge bird—an albatross—soared passed the ship. A sudden gust of wind blew the bird into the ship’s mast wherein it got tangled before plummeting to the deck. It survived the fall, but broke a wing. As it struggled to its feet Narfu and Zainnis approached the bird—attempting at first to calm it so they could heal the injury. However, the bird was frightened and hurt and backed away from the well-meaning adventurers. It would only let Aq—wreathed in the power of goodness—approach. Finally, managing to reach the bird, he used his divine powers to heal it.

Although the bird was now healed, the crew were still nervous. To ally their fears, Markessa announced she would sail far out to sea to avoid the isle and the causeway. However, her plan backfired somewhat two days later when it was discovered all the ship’s fresh water supplies had somehow become fouled. The nervous crew refused to accept magically created water summoned forth so close to the isle and so Markessa came up with a new plan.

A day’s sail to the north lay a remote island—Warvil’s Folly—named for a sea captain marooned on the island for several years a century ago. Once rescued, he built a church to Osprem (god of the sea) on the island in thanks. The church prospered for decades until pirates sacked it and the island was now uninhabited. It was here, Markessa proposed to replenish the ship’s water supplies.

The island appeared on the horizon the next day. Edged with steep cliffs and covered in thick forest, the place seemed uninhabited. A narrow sea channel led into the middle of the island to a lagoon, but first the ship had to thread its way passed several rocky islets and shoals. This Markessa managed—slowly—but close to the island itself the sailors in the rowboat scouting ahead came back shouting and gesticulating wildly. It transpired they had seen a huge turtle on one of the sandy islets. Panic almost gripped the crew. Could this be a dragon turtle? Were they doomed?

To determine the truth of the situation, some of the party took to the ship’s boat to investigate. Luckily, it turned out the creature was not indeed a dragon turtle—although it was easily 12 ft. long—and instead was “just” a huge example of a mundane turtle. The party decided to leave well alone and the ship passed by. The party did determine, however, the turtle seemed to be burying eggs not the beach. Several of them wondered if they should return later and dip up some of the eggs.

At this point the party split up. Grooble, Tristham and Morden decided to stay with the sailors and guard them as they replenished the ship’s water supplies. The rest of the party decided to explore the island and try to find the abandoned chapel. Crossing the stream feeding the waterfall was easy—someone had handily placed stepping stones to facilitate travellers—and beyond lay the forest. A faint trail marked by moss covered stones led deeper into the forest. However, several of the party then noticed Narfu was missing! No one had seen the monk leave, but nevertheless he was gone! Zaniness found his tracks quickly and the monk was tracked down. He was sitting under a tree apparently praying. The party quizzed him on his disappearance, but he simply said that he felt at home on the island.

With Narfu reunited with the group, they pressed on. The pathway led around the island in a circuitous route. The party only found one thing of interest on their journey—a single clawed footprint made by some kind of man-sized beast. However, no other clues or signs were evident and so the group pressed onwards. The pathway crossed a rickety rope bridge spanning a deep canyon and ended in a stout wooden bridge spanning another canyon. Beyond—wreathed in creeping ivy, vines and other growths lay the ruined church.

Inside they discovered ruin; everywhere nature was reclaiming the structure. A fountain bubbled forth water and was surrounded by a pool and a stretch of mud. As the party approached, a strange mud creature—vaguely man-shaped—rose out of the mud. It spoke in a gravelly voice to Narfu, but no one understood the language. When Aq stepped forward the creature looked at him and hurled mud into his face. Battle was joined—and it was a desperate battle. Aq—try as he might—could not clean the mud from his eyes and spent much of the battle blind. Nok was badly wounded before Zainnis slew the creature with a well-placed arrow. Curiously, during the battle the creature completely ignored Narfu even though he struck it several times. 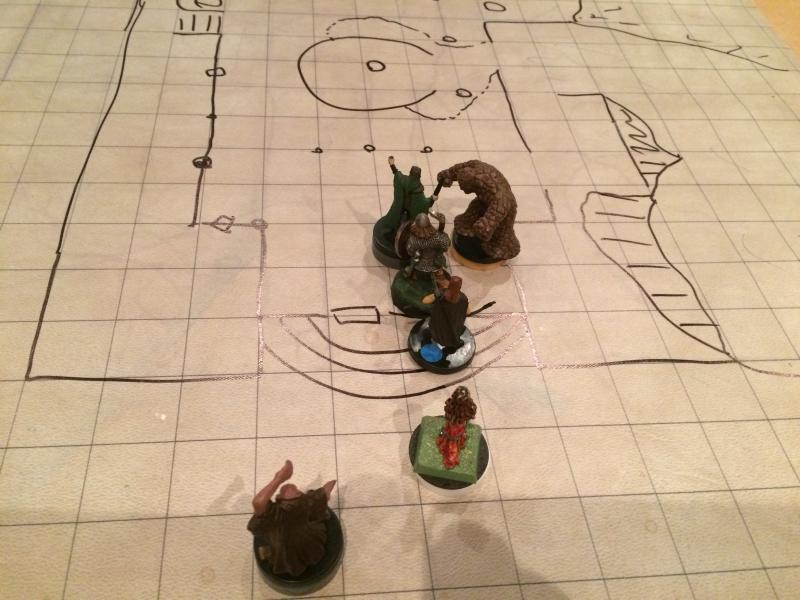 With the battle over, the party searched the chamber. This was a mistake. As Kara advanced into the chapel’s nave using detect magic two stone coffins began to shake wildly. As she watched two immense bone snakes—necrophidius—emerged from the coffins. Easily bigger than a man, the snakes swayed toward the party. Aq slew one of the beasts with a terrific blow that shattered its skeleton. 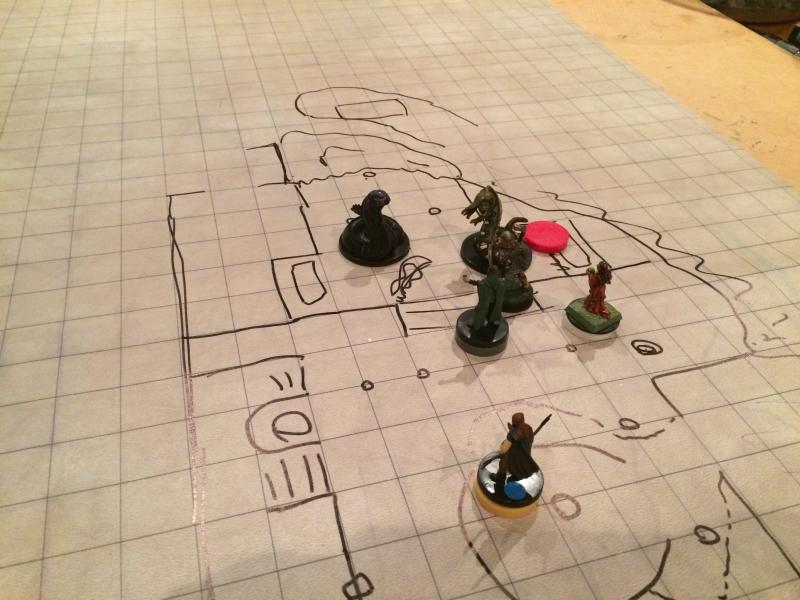 As Nok watched—seemingly unable to decide what to do—several of the party were injured by the snake’s powerful bite. However, eventually weight of numbers told and the chapel guardians were slain…